A couple of photos from last weekend's painting efforts. The latest additions to the colection are another pair of civil war ironclads. For the Union we have the river monitor Ozark, a not-entirely-successful design and a fairly curious design, combining a turret with a superstructure and exposed guns.

The second is the Confederate ironclad ram, Arkansas. One of my favourite civil war vessels on account of her rather splendid showing against a vast Union fleet (described by her captain as "a forest of masts and smokestacks), through which she passed with nary a scratch.

Both models come from Bay Area Yards and are very finely cast. The photos were taken in a hurry using one of our "point and shoot" cameras out in the garden in bright sunshine, so they don't really do justice to the models.

Also completed this week were a couple of Thoroughbred mortar schooners. Completed as far as the paintwork is concerned, I'm currently thinking about whether to rig them or not. 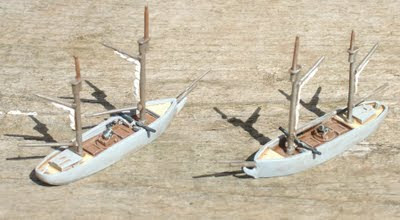 Currently on the workbench - two riverboat rams and the CSS Patrick Henry. More on these over the weekend.
Posted by David Manley at 03:03