The latest addition to Her Majesty's forces currently engaged in the Sudan are a couple of Hale Rocket batteries (these are another of the military curiosities that attract me to the Sudan campaigns). The spin-stabilised Hale Rocket, launched from a trough (or Machine Rocket, War) was used by the Egyptian and British armies, but as far as I'm aware there isn't a currently model available in 15mm so I decided to scratch build a few. The tripod is made from florist's wire cut and bent to shape, with a slice of card for the trough. They aren't the epitomy of accuracy, since the tripod isn't quite the right shape, and the trough isn't "trough" shaped as I couldn't find any channel sections that suited, but it should be a simple job to replace if and when I do. 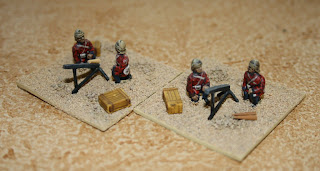 The crew are spares taken from the Essex maxim gun team (the maxims haveing been snaffled for my 1890s era troops. They are a little oversized when compared with the Peter Pig troops that make up the majority of my armies, but not overly so, and they fit in OK. I decided to fill in the relative sparsness of the bases with some ammunition crates and a few rockets. 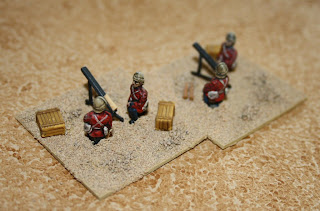 Purists will of course point out the inaccuracy in the scarlet uniforms, but then again a fair proportion of my 1880s British troops are clad in scarlet, as you'll see when I post on the mounted and dismounted cavalry soon). So they are internally consistent if not strictly historically accurate (and I like them clad that way anyway!) 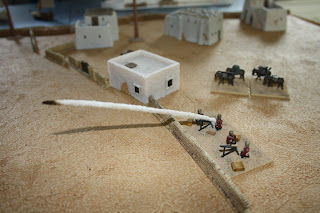 Finally, a fine illustration from our correspondent on the banks of the Nile, witnessing a live fire demonstration of the mighty Hale!

That covers the Hale rockets for the British. All being well I should have some Peter Pig Egyptian artillery crew arriving in the post soon, and so Hicks Pasha can have his own rockets available in a couple of weeks :)
Posted by David Manley at 11:17 4 comments:

I'm a naval wargamer at heart which is probably why I find the Sudan so appealing - gunboats and naval brigades all over the place :) One of my early jobs in this project was the constrction of a gunboat. Its generic in nature, although with a few (too many?) Melik influences. it is, however, supposed to be a fairly nondescript 1880s screw river boat with some impromptu armour and handy spots in which to mount the odd 7pdr or a Nordenfelt. 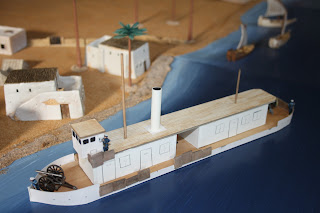 The hull is balsa, which allowed me to stain the deck. The rest is heavy duty card and paper, with thin balsa sheet offcuts to represent timber cladding. The ship is a "work in progress", and I hope to add to the general clutter on her decks as the months go on. I now have plans for a smaller, more "scruffy" sidewheeler, which should be on the stocks around about Christmas time. 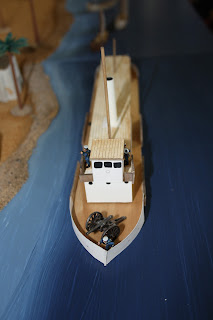 Posted by David Manley at 21:35 No comments:

I suppose I've come quite late to the world of wargaming blogging. The very fact that I'm here I guess is down to Steve Blease and his excellent "Bleaseworld" blog, plus some comemnts and questions on TMP regarding my Sudan project. So, at long last, here it is. I'll aim to chronicle the development of my various wargaming projects, the main one just now being the protozoan set of rules that gives this blog its name - Don't Throw Bloody Spears At Me (hmm, abbreviates to DBA, I wonder if that'll work?) and the various 15mm armies (and riverine csquadrons) that I'm assembling to fight out the campaigns surrounding the rise and fall of the Mahdi and his followers. I've said it that way since I have a hankering to expand to cover not only the Sudan and Egypt, but also Abyssinia, and the Italian and French forays in the region. Still, that is far in the future amd for now I have to satisfy myself with British, Egyptian and Sudanese (plus a few Indians - must remember the Suakin front!). So, to kick off, a few pictures of the mahdist horde in and around their encampments on the Nile - your intrepid correspondent hopes to have pictures from Sir Garnet's camp in the not-too-distant future! 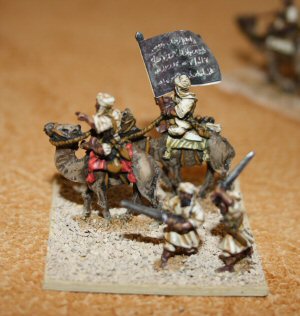 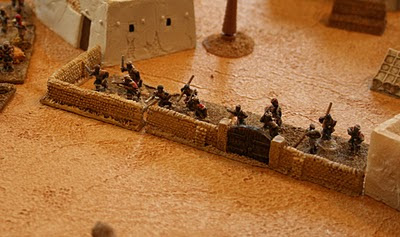 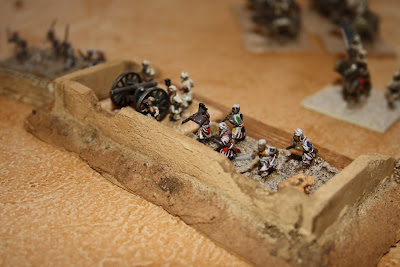 The fort is made from foam core with the card front peeled away. The resulting surface makes a decent sand stone wall effect when painted and stained.
Posted by David Manley at 10:11 No comments: