I've just been told off for not posting anything for a while, so here's a brief report on the 2021 "Wings of Glory" weekend that took place at the South Yorkshire Air Museum in Doncaster a couple of weekends ago. I was suitably put in the mood by attending DSEI at the Excel Centre where I got to see lots of really big toys, and on completion I headed North.

The event takes place over a weekend at the air museum, with three games run on Saturday and the "Ace of Aces" super-melee on Sunday. This is how it played out

Game 1 - Wings and Waves of War

I ran this game, in which a pair of British CMBs are seeking to sink a stranded German U boat. Support is provided by an 80' Motor Launch (its really just a distraction), and both sides have a variety of seaplane fighters to try and destroy (Central Powers) or protect (Entente) the CMBs. I've run this before and its quite popular since the aircraft are unusual and Rod Langton's 1/200 surface craft are quite attractive. Points scored for each enemy plane downed, if the Entente sink the U Boat (get within 1 firing ruler's range) each player scores an additional point, Central Powers players score apoint if the sub survives.

This was a REALLY close fought game. The CP were distracted by the ML which ultimately cost them the game, since they wasted a few attacks damaging it whilst the CMBs closed. A W-29 shot up one of the boats and a W-12 caused havoc on the other but in the end the last CMB closed to launching range with only 3 damage points remaining. There were quite a few "Bang" cards drawn, with Tim (aka "Flying Helmut") exploding twice, much to his frustration (players whose aircraft were shot down could come on in a new crate after sitting out for a turn. Tim very kindly sent me some photos from the game, I was too busy running the game to take any of my own 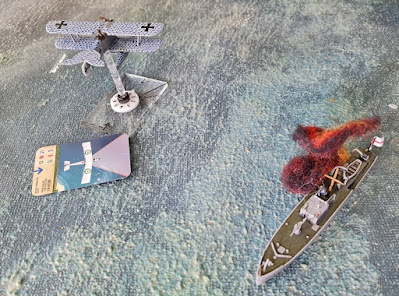 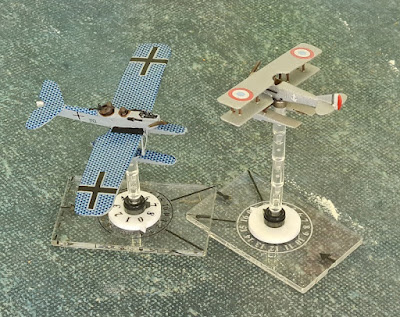 In this game I'm driving a French frigate. My orders are to recce a Spanish port on the coast of Africa and a coastal silver mine further along the coast. I have another frigate in company with the same orders driven by another player. There's a British frigate, a couple of Spaniards, some locals (who turn out to be rebels), a(suitably black painted) pirate and a British frigate about. My French frigate oppo recces the port then goes "off piste", shooting at the British frigate (we aren't at war), then runs aground and it then boarded, captured and burnt by the locals. The British frigate has a run in with a local frigate and the pirate and is sunk. I sail across the board, recce the silver mine, turn about and exist. Not a shot fired, mission competed 100% (I would have given the pirate a few broadsides on the way out but the game was called before I had a chance). 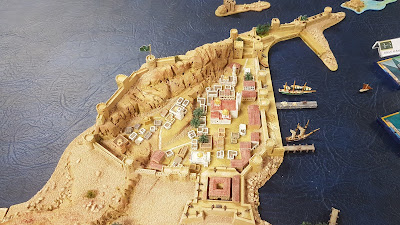 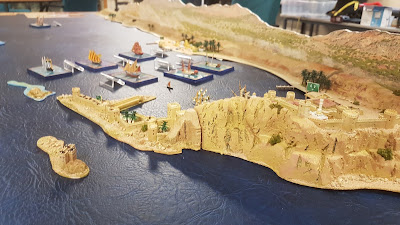 My first proper game of Wings of Glory WW2. I'm flying two Westland Whirlwinds, aiming to bomb and sink a German fuel tanker escorted by two S Boats. There are four Fw190s flying top cover, I have 4 Spitfires covering me. I run in, drop bombs, get shot down by the superfantastic AA on the S boats (!) but discover I've put four bombs into the tanker and it sinks. Game over. We we-run the game, I get to drive the tanker and S Boats as the air wargamers want to see how a naval wargamer conducts a defence of a high value unit.  So I deploy and manoeuvre the S Boats such that they stand between the Whilwinds and the tanker so I get to shoot at them before they reach their bomb release point. I shoot one down, draw rubbish damage chits against the second so it gets to the release point but its bombs only cause minor damage, then my AA shoots it down anyway - plus two Spitfires that got too close. Those S Boats are MEAN (and of course ahistorically powerful, but c'est la vie) 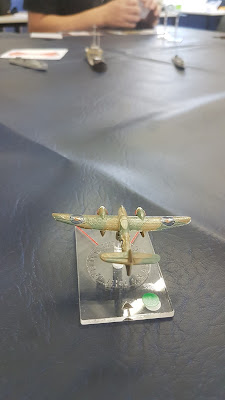 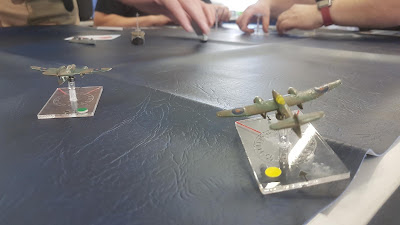 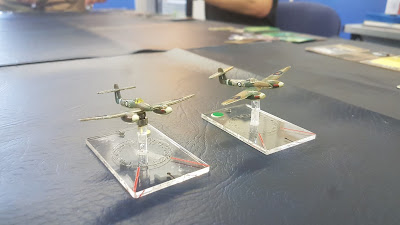 On the Sunday we play the Ace of Aces game, 12 players a side along a long, thin table. SE5s for the Allies, Fokker D.VIIS for the Central Powers. 4 points for a kill, lose 2 points if you are shot down. I end up facing a player who may or may not have been keeping an accurate record of their  damage (its all hidden), get a stupid number of jams, shoot down the same player (he's been shot down by someone else in the meantime). Not the greatest of games for me this time but plenty of banter. 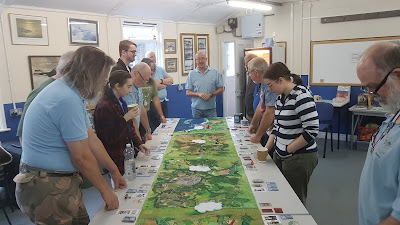 Ended up 5th overall, won a mint condition Sails of Glory HMS Victory special pack (I didn't realise at the time that I hadn't got one before, and so it was the only missing item in my SOG collection), then depart for the long drive home.

Assuming the date doesn't change to the end of the month I'll be there again next year. I've already started 3D printing the special models for the game I'm planning to run....