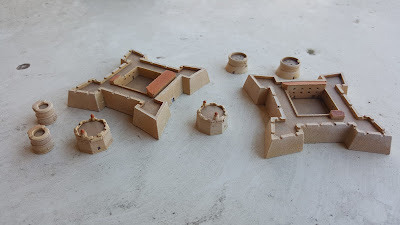 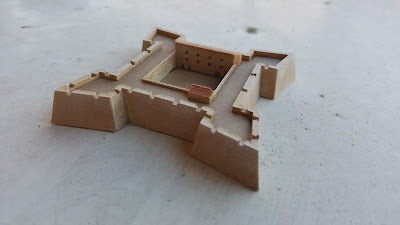 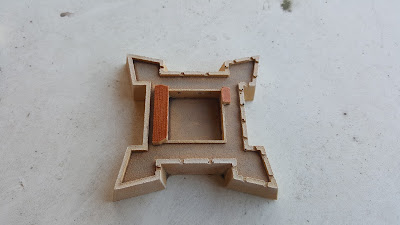 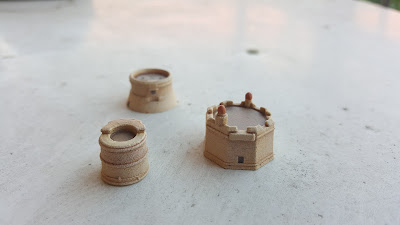 This month saw the 75th anniversary of the battle of Midway. Having done  Trafalgar on its 200th, Lissa on its 150th, Tsushima and Jutland on their centenaries and North Cape on its 60th it seemed the natural thing to do a 75th anniversary refight of this classic battle. Alas various logistical issues meant the actual game had to be a bit later than I'd hoped so rather than playing over the weekend of the 3rd/4th the game was actually run on June 10th. The venue was the skittle alley of the Tudor Arms pub in Slimbridge, regular meeting place of the Berkeley Vale wargames club. 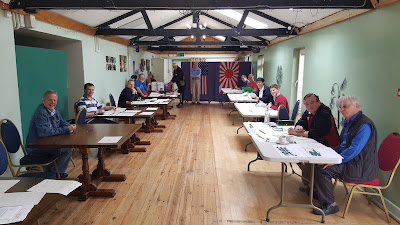 Ready for the off. Alas I was so tied up running the game that this was the only photo I got all day!

The game comprised ten players in eight commands (three US, five Japanese) with some of the less interesting commands being run by the campaign system (i.e. the umpires).  I umpired the game, ably assisted by Stuart Barnes Watson and Stuart Machin as my umpiring team - they provided the link between "game control" and the commands, collecting and distributing order, communications etc. as well as assisting with the various tactical battles that ensued. To add some more spice to the game and to give the players some additional (vaguely) plausible assets to use  I allowed each side to have some "extras", so the Japanese added Zuikaku with Shokaku's air group embarked, whilst the US got Saratoga with a scratch air group from San Diego.

I kept track of the course of the action using Powerpoint. Before the game I had created a presentation using the game chart. Task force positions were plotted on the chart and search locations compared with those positions to determine if any contact had been made. At the end of the turn I typed up a short record of key actions that turn, then saved the file, created a "duplicate slide" and then used that as the basis for the next turn's movement. In so doing I also created a turn by turn record of the game. 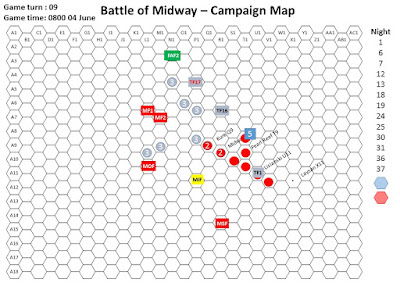 Starting points were pretty much as in the historical battle, with the optional forces tagging along behind and entering slightly later. B17s from Midway made the first contacts, detecting the Japanese carrier strike force early on June 3rd, although the contact was initially misreported, a follow-up mission correctly identifying at least 2 flat-tops a few hours later. All the while TF16 and 17 closed from the North East - although oblivious to the contacts since they were not advised by the command at Midway as to what had been seen. A third B17 recce mission was bounced by CAP from Hiryu before reporting and, worse for the US, a Val from Kaga spotted TF17 at extreme range. The Japanese players quickly mounted a dive bomber strike and a force of Vals and Zeroes headed off from Akagi and Kaga to meet the two US carriers (curiously there was no strike from Hiryu and Soryu). The dive bombers and their escort found an alert air defence over the carriers and soem horrendously accurate AA fire which saw only one Val getting into position to bomb Enterprise - only to see her bomb drop harmlessly in the carrier's wake. Air losses on both sides were high in this initial encounter. The Japanese were left ruing their decision not to make an all out attack.

Alerted to the presence of the Japanese carriers, the US TFs redoubled their search efforts and four hours later an SBD from Yorktown found the Japanese. Yorktown immediately launched a strike. In a battle eerily reminiscent of reality Yorktown's TBDs were shot to pieces as they made their attack, but the SBDs were more successful, scoring three hits. Success, or so they thought, since the damage rolls (conducted in secret to preserve the fog of war) resulted in only minor damage - the Japanese players rolling the best possible combination of results), which slightly slowed the Japanese carrier and had no effect on her ability to operate aircraft. With that, air operations on the 3rd wound down as the fleets settled into the night. Off Midway the defending PT boats played cat and mouse with a Japanese submarine which closed to recce the island.

Daybreak on the 4th brought disaster for the US team. Saratoga, closing from the East, ran over a Japanese sub and was torpedoed. Although not sunk she was crippled and was forced to reverse tracks and limp out of the area. However she did manage to fly off her air group to Midway, delivering some much needed additional firepower, since aircraft from Zuiho had raided the island at daybreak and caught a number of aircraft on the ground. But to the North of Midway the Japanese carrier strike force found TF17 barely 150 miles to the South East. This time the Japanese threw everything they had at the singleton carrier. In a frenzied attack Yorktown was hit by two bombs and no less than seven torpedoes - she capsized quickly - whilst Astoria, Hughes and Portland were crippled. TF17 had ceased to exist as a combat effective task force and spent the rest of the game picking up survivors from the sunken flattop and then limping out of the area.

After that frenetic action we expected more of the same, but as the 4th wore on it was apparent that lady luck wasn't with either side as far as their air searches were concerned, and no contacts were made (several missions came tantalisingly close to making contact). That all changed at Midday when a Catalina from Midway spotted Yamamoto's Main Force 300 miles from the island and heading straight for it. Contact was maintained and at the optimum time an "alpha strike" from Midway hit the Japanese battleships. Yamato was singled out as a target. With no air cover the US bombers from the island plus Saratoga's air group plastered the Japanese flagship, but the US players managed probably the worst run of die throws of the game to score only a single torpedo hit which caused little damage. However, Nisshin was disabled and detached from the group. Meanwhile. Zuiho's air group mounted another strike on Midway. This time the defenders got the better of the Japanese as a swarm of Buffaloes and the odd Wildcat fought them off, preventing any of the strike aircraft reaching he island.

In a rare example of co-operation the Midway garrison sent a contact report to TF16. The result was a follwo up strike on Yamamoto's force as it continued to close on Midway. again Yamato was the target and this time the die rolls worked in the Us  favour. Yamato was left dead in the water (she would be scuttled at game's end) and Yamamoto himself was killed by a direct hit to the bridge. Chiyoda was also crippled in the same attack.

As darkness fell Kongo and Hiei with their attendant heavy cruisers closed with Midway to conduct a shore bombardment. The island's PT boat force atacked though the night, sinking one destroyer, crippling a second and damaging the cruiser Chokai. Missed opportunity of the night was a PT boat which managed to launch four torpedoes against Zuiho (she was not detached from the group), only to see them miss astern, The bombardment on the airfield was moderately effective with 17 planes destroyed; return fire form the shore batteries was largely ineffective.To the West the surviving members of the Japanese Main Force ran through the US submarine patrol line; Nagato was hit twice which slowed her enough to force her detachment from the force.

As day broke US search planes failed to find the Japanense carriers Midway island was hit by a full strike from the Zuikaku; the extra carrier had been attached to the Midway Support Force and had made a stealthy approach to the islands from the west and south. Undetected throughout the game her strike caused significant damage. To the North the remnants of TF17 were hit by planes from Akagi and Kaga; none of the US ships survived.

At this point, after nearly 9 hours of play and with a number of the commanders having to head home we drew stumps. At the end it was looking a bit sad for the USN, Yorktown sunk, Saratoga crippled but escaping to the East. On the Japanese side Yamato and Yamamoto were gone, Zuiho's air group had suffered terminal losses in the air over Midway but their force was otherwise fairly intact. The US had lost TF17 in its entirety, TF16's air wings were depleted and Midway was effectively surrounded by Jananee surface groups hell-bent on bombarding the island, with the invasion force poised to the South. We judged that the US would probably pull out and let the Japanese attempt a landing, so a victory to the Japanese, but not as massive a victory as it appeared it may have been since TF16 was still at large (albeit in a perilous position).

It was a fun game, everyone seemed to enjoy it and my brain didn't explode too much from umpiring. Thanks to Stuart Barnes-Watson for being my umpiring team and for keeping me sane (and to both for bringing models). Alas I only got one photo at the start, but the players were taking pics so I hope to see some of them soon.
Posted by David Manley at 08:23 3 comments:

In amongst preparing fr next week's big game ** I've been finishing off a couple of Zvezda Jagdpanthers that I bought from the local model shop a couple of weeks ago. The Jagdpanther is one of my favourite vehicles of WW2, probably because I had a lovely model of one when I was a youngster (the old Matchbox model, I saved up for weeks, bought one from the local newsagents (remember when newsagents sold plastic kits?) and my brother then took it off me and made a lovely job of building and painting it for me - it was a treasured centrepiece of my 20mm German WW2 collection for many years until the lot vanished).

Anyway, Zvezda's recent release is a lovely model, nicely detailed and easy to put together. Its a snap-fix model, but as always I used MEK to glue the pieces together permanently. I added "clutter" to both, side skirts to one and a commander figure from an old PSC kit to the other. Both were then "winterised" to fit in with the rest of my 15mm collection. I'm really rather pleased with these, they bring back happy memories of my old Matchbox model. No doubt they will be as successful at plinking Shermans and T-34s as the original :) 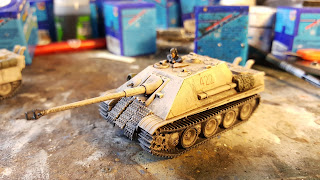 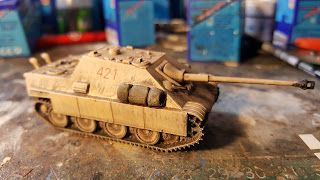 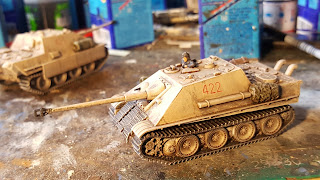