I'm also hoping that, since that nice Mr Decapod is making a couple of sets of Cod War ships to use with my rules for that conflict, that he might also decide to do some Japanese whalers and a Greenpeace ship or two - fingers crossed!
Posted by David Manley at 12:56 No comments: 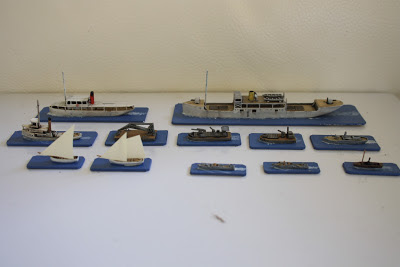 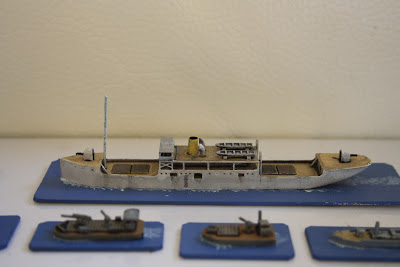 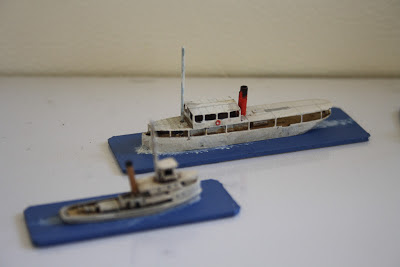 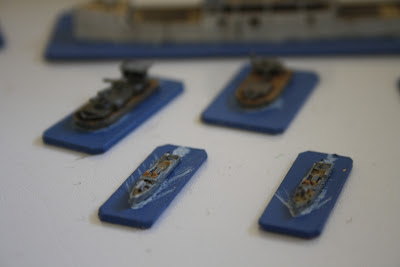 
We gave X Wing a bash at the Berkeley vale club last night, with Shaun, Alan, Graham and myself fighting through three battles. A little later than planned due to various domestic incidents at Chez Pony, and I did forget to bring a cloth for the table (which led to a few minor "slippage" issues) but eventually we got going. 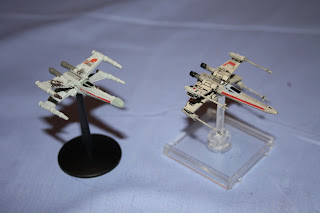 Mission 1 - A straight fighter sweep - Graham and Shaun taking Luke Skywalker and Biggs Darklighter in a pair of X Wings against Alan and I driving some bizarrely named basic TIE fighter jocks. A closely fought battle that led to the eventual defeat of the Rebel Scum (poor Biggs!).

Mission 2 - As with "Wings of War" I think the game works better if there is a proper mission element to it. So this time we added a ship needing escort.
In this case an Imperial shuttle, stolen by the Rebels, which needed time to get its hyperdrive up to speed before it could make the jump to lightspeed ands safety. To do this the shuttle had to survive for five turns. this then gave the Impy players a choice - concentrate fire on the shuttle and risk destruction by the X Wings, or blow away the fighters but risk the shuttle getting away. In this action we went for a combination of the two, but with the shuttle as the primary target. Nearly got it too, by the end of turn 5 its shields were down and it was down to a single damage point. But it was still structurally OK and had  a working hyperdrive so it escaped to victory. Graham's "Biggs" not so lucky though, blown away for the second game in a  row.

Mission 3 - we swapped sides for this, with Alan taking Luke Skywalker's X Wing (I can see the resemblance, really) whilst I drove Biggs' "laser magnet" (he has a special ability which allows him to draw fire away from other friendly ships)  and the shuttle, and Shaun and Graham took on the role of the evil empire. and it looked as though the Rebels were going to do it again, especially when Shaun's two TIE Fighters were blown away in quick succession by Biggs and the shuttle (damage dice from all players was pretty darned good in this game), but alas the close confines in which the battle was fought forced Alan Skywalker away from the action for  a brief time.
brief, but just enough time to allow Graham Vader's fighters to get in tight behind the shuttle and vaporise it with some spectacularly good last-turn shooting.

Post battle analysis - everyone seemed pretty happy with the game and it looks like we may be on for a rematch next week. The shuttle escape scenario looks like it works well with a 5 turn limit. we had  a better appreciation of the special abilities that pilots have this time around - they can certainly make a difference! And there was  a call for more ship types, which I am happy to oblige.

Steve will be pleased to see that, at no time, did either a Y Wing or an Ion cannon make an appearance :)

Thanks to Alan, Shaun and Graham for coming along.