Not much happening on the wargaming front at the moment, as I'm in the wilds of Scotland conducting some trials. And no prospect of anything next week as I'm off to somewhere warm, sunny (and potentially quite loud) for next week. Having said that I'm whiling away a few hours sorting out rules, articles and other stuff on my laptop wilst I'm away. and it has given me a chance to "get back to nature" with some nice walks and drives in the country. 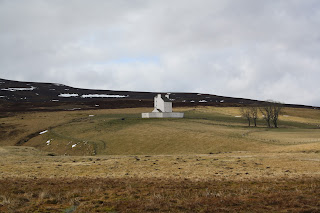 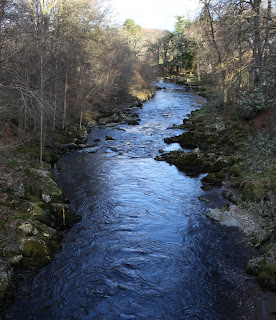 We begin our return home this evening - off to Fort William, and then a drive down through the Trossachs and past Loch Lomond to Glasgow to fly back Saturday lunchtime (I've not driven that route for over 25 years). With luck, able to finish off my 1/1200 USS Mississippi, CSS Gaines and CSS Morgan that evening :)

EDIT - as I write I've just realised that all the ACW painting I've done over the last few weeks means that I have met, in fact exceeded one of my targets for the year - yay me!!
Posted by David Manley at 07:09 1 comment:

Wings and Wakes of War

Another weekend of busy family stuff and occasional painting. There's a clutch of 1/600 ACW drying on the workbench, but the Hansa Brandenbergs and the CMBs are finished at last. 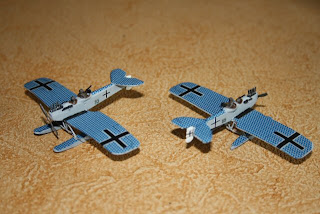 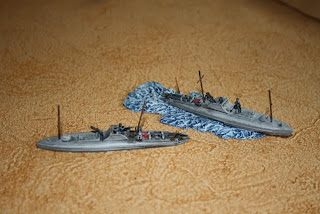 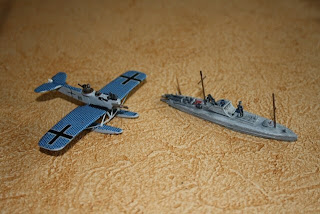 I'm working on a Wings of War scenario using these. the CMBs aren't fixed to the sea bases. Instead they are removable so that the models can be shown at speed (with the base) or slow /stationary (without).

For those who like to know these things the aircraft are from Riviresco, the boats from Rod Langton
Posted by David Manley at 19:26 5 comments:

This Weekend I Has Mostly..

... been working on an idea for a participation game that might be coming up in a few months. Its a naval game, but using Wings of War, so one side takes control of a couple of British 55' CMBs, the other side has  a pair of Hansa Brandenburg W.29s. I ordered the seaplanes from Riviresco a month or so back, and the CMBs arrived from Rod Langton on Saturday morning. As of now the planes are just about done, the boats undercoated and ready for a decent paint job. Details to follow in a few days when the project is complete.

Also on the stocks, in 1/600 I have the USS New Ironsides and a US paddlewheel gunboat to sort out (both from Thoroughbred), whilst in 20mm I've picke dup some decent desert stuff via Ebay, so there are a couple of Grants, Matildas, an '88 and tractor and a pair of Krupp protz trucks to spruce up.

No pics today though as the camera battery is flat and I forgot to recharge it.
Posted by David Manley at 05:15 2 comments:

This weekend was rather busy, what with philip's guitar lessons and footie, Laura's horse riding lessons, cat cuddling at the local animal rescue shelter and planting out a whole load of shrubs that SWMBO and Laura had bought. However, in between those I still managed to get a good deal done.

First up, some 1/600 ACW - CSS Governore Moore from Thoroughbred, 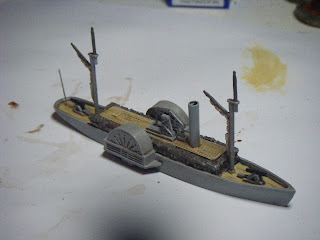 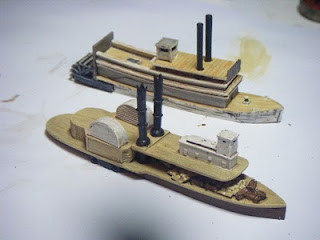 And a Peter Pig sidewheel ferry, but this time done up as a generic European 20th century ferry for use with my 1/600 WW2 coastal forces games. 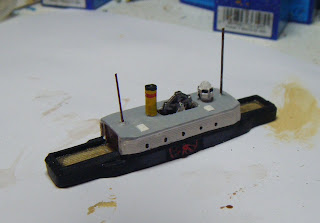 Terrain has been getting a look-in as well. I bought an Airfix "Forward Command Post" for the kids' WW2 project. A nice kit from my younger years, I recall this coming with a very nice vac-formed base. The latest Airfix offering doesn't feature the base so I used an old CD instead, with PVA and sand for basing material, and coffee stirrers cut up to make floorboards. 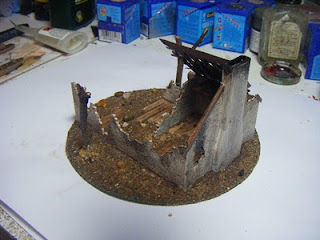 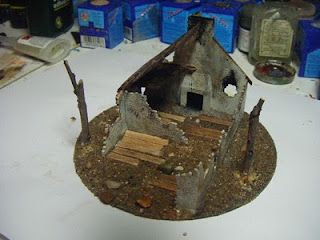 AK47 (the original edition) is on my "to do" list, so I also made some generic bits and pieces for that. the smaller one is made from corrugated cardboard from Hobbycraft and cut up drink stirrers, the large rone from foam core. and and twigs from the garden complete the scenes. 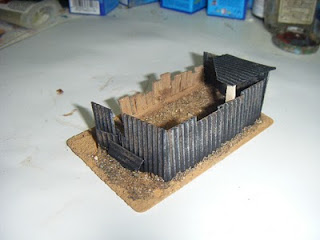 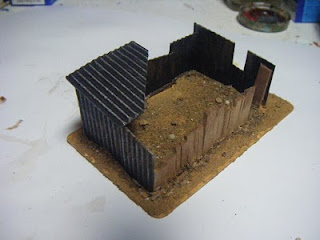 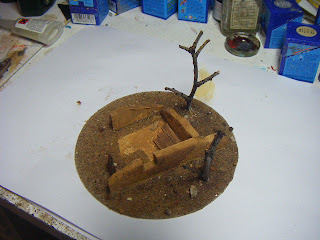 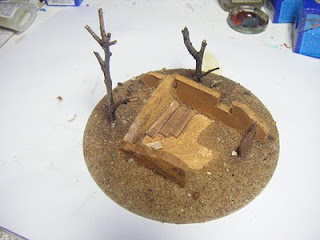 And finally another WOW repaint - my altar ego "The Black Hand" now has a Roland C.II for those days when a 2 seater is required. 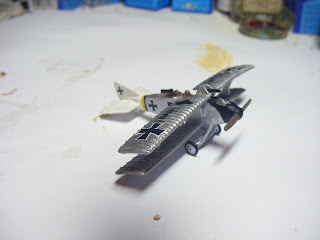 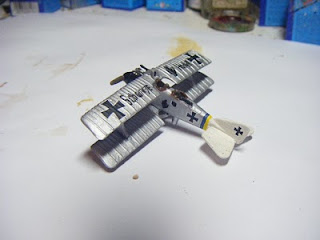 There's also a couple of 1/600 WW2 coastal models on the workbench and a pair of Airfix Matilda IIs in the paint shop.

Rather worryingly though my camera seems to have picked up a "shadow" at the bottom.  I wonder what I can do about that.

Another Wings of War repaint completed this evening. This time an SE.5a, painted as Captain Duncan Grinnell-Milne's red-fuselaged "Schweinhund". Roundels courtesy of Dom's (most excellent) Decals :) 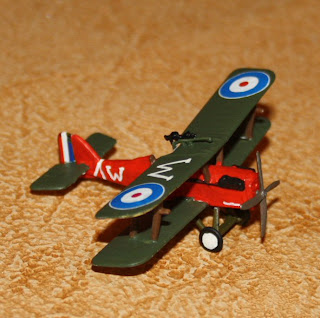 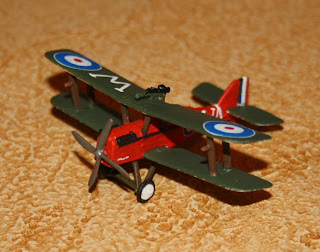 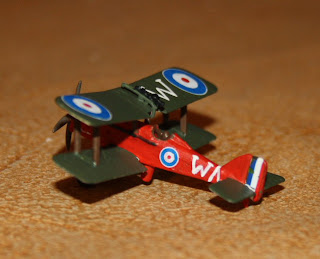 Also tonight - the "father and son" project from the weekend. Philip's class is learning about the Home Front at school at the moment and we got a project to build a model of an Anderson Shelter. Here's what we came up with. 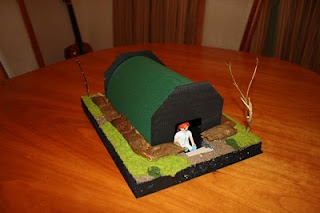