As is customary for my blog, as as I sit here huddled in the cold (our  heating has failed, we need a new controller for he heat pump and there's no spares available until Tuesday) waiting for this dreadful year to come to a close it is time to review how things went against "the plan". 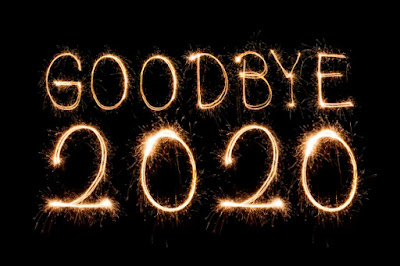 So, here goes:
1) 10mm Vietnam - I have a load of new Pendraken figures to replace the older types I've had for a couple of decades. So #1 on the plan is to sort out the new figures, fix the various bits of broken terrain that I have and then make sure my rules are fit to use.

No progress on this at all, apart from working on some Swift boats, PBRs and aircraft thanks to Nick Hewitt asking me to 3D print a few for him. I guess I also got to renovate a whole load of old riverine landing craft and monitors that I've had in a box for a decade or so, but nothing happened as far as the replacement figures were concerned. The rules I'm using look ok so probably no need to work on them anyway. 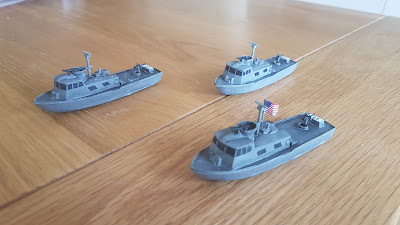 1/200 Swift boats
2) 15mm Winter Skirmish and 20mm Burma Skirmish. Yes, I WILL get these sorted and ready to play. Rules need to be decided upon (fast and fun, not too serious), I may just end up writing my own for quick games at Berkeley Vale. That or heavily modify Bolt Action.
Lots of good work here. I decided to use my "Fireforce" skirmish rules for Burma and the "Winter Skirmish". I played  few games over the Summer and all seemed to be well. I also did well working on models, with plenty of new Russian Front vehicles for both sides coming out of the 3D printer. 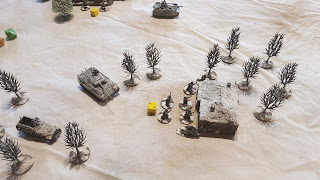 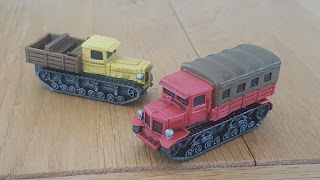 15m Russian tractors. These ended up in civilian colours as they are destined for the "imagi-nations" element of my Spanish Civil War collection
3) Sci Fi Submarines - The rules I've used for my "Stingray" games are pretty stable now. I'm going to work on them to create a set of generic sci fi submarine rules (into which Stingray will fit), but I'm also going to look at a Victorian "subpunk" version, having found some interesting models to work with. Something different I guess. Both versions will have their own bespoke backgrounds (who knew, for instance that the British Empire, the French and the United States fought a clandestine war beneath the waves whilst also fighting off mysterious anarchists??)
These came on really well, at least the Victorian version has. With luck these will hit the streets very, very soon. I knocked up a good selection of models for submarines, sea bases, seabed crawlers and divers, again via the 3D printer. Good work here :) 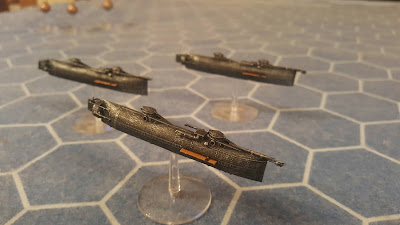 4) WW2 coastal forces - I have a horde of new boats painted up as a result of getting this blasted 3D printer, so a major task will be to get them properly based. Then more games, especially some Pacific theatre ones. This will hopefully get me in a position to finalise my "Narrow Seas" campaign system as well.

The campaign system develops slowly, but the models are coming on well. I based up most of the printer "back log" - then went and developed a load of new models which then also needed to be based and painted. Pride of place I think has to go to the  Finnish coastal battleship Ilmarinen, a ship I've wanted to have in my collection for many years. Another 3D print that came out well. I also worked on Finnish MTBs, Russian and Axis craft for Lake Ladoga, RN MTBs in Hong Kong and a small set of WW1 British CMBs and German LM boats (along with a couple of RN monitors and  a German coastal defence battleship) so I can extend "Narrow Seas" back to the Great War.
Of course Covid put paid to just about evety plan I had to actually play games (along with everyone else's plans of course), so I spent a lot of time modelling, painting and working on various rule projects. In 15mm I painted all the 15mm Pacific WW2 models that I've had in a box since Peter Pig's XIV Army range was released, some 100+ vehicles, and printed a load more - mostly Japanese. The plan is to sort the figures out next Spring. I also blitzed a very large pile of 15mm Vietnam and AK47 figures (around 200) that have been sitting around for far too long (some of the Vietnam figures were original PP from the 1990s), and in fact that was a bit of the theme - hunt out odds and sods (or in some cases entire armies) that have been sitting in boxes and finishing them off.
On the naval front I revamped my ancient fleet action set of rules, created Greek and Persian fleets in 1/2400 and refought Salamis on the 2500th anniversary of the battle. The models were put up for free on Wargame Vault and to date over 200 sets have been downloaded.
I picked up a set of Tywlite;s 1/1000 Russo Turkish naval war 3d model files, revamped them (some needed quite a bit of work), and created a load of new models to represent steamers and paddle auxiliary warships, then went on to create squadrons of hypothetical 1870s and 1880s ironclads and turret ships for an "imagi-nation" project I've had on the back burner for a while. But the Russo Turkish fleets themselves amounted to over 70 new vessels - all 3D printed. 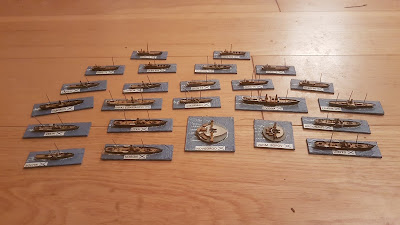 Yes, I know the labels for Popov and Novgorod are the wrong way round: I've changed them already :) 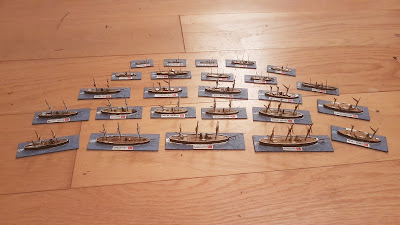 Back on land I finally painted up the camp follower and farrier sets  bought at Devizes in 2019, finished off a half dozen stands of ancient Greeks for my generic DBA armies - and gave them some mythical opponents in the form of a minotaur and Medusa - printed and painted loads of new vehicles for AK47 (my warlords have a host of technicals and second hand armour to play with now, as well as a few new helicopters) and my "War on the Moon" set in 6mm is now just about complete (although lacking rules). 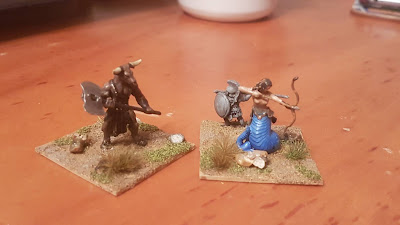 Out in space I printed a load of "original series" ships for Battlestar Galactica (bittersweet as only this week it was announced that Areas is having to pull the plug on the game as they've lost the licence). Sails of Glory also benefitted from the 3D printer magic as I made the 44 gun razees Indefatigable and Anson in 1/1000. 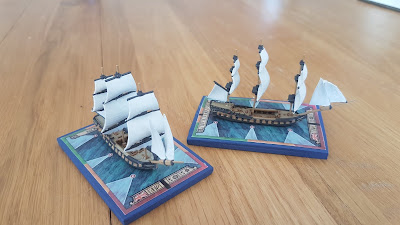 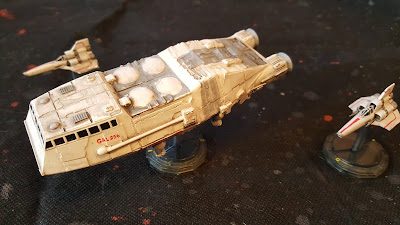 There are probably loads of things I've forgotten - Maunsell sea forts in 1/1200 and 1/600, Japanese and Australian WW2 aircraft, some long lost AW steam frigates, and many others. 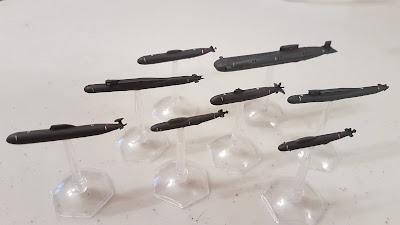 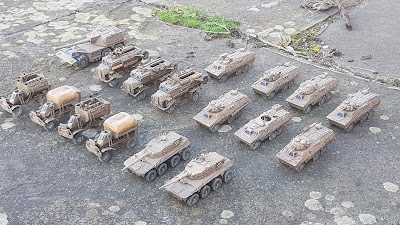 South Africans for AK47 - those Casspirs were horrible things to put together! 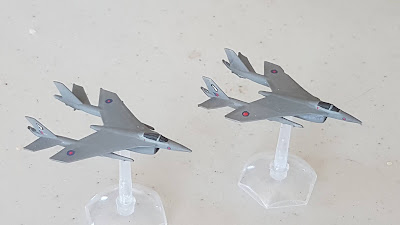 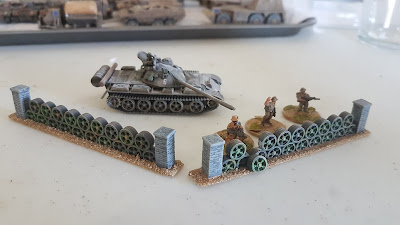 The infamous "T55 Roadwheel" garden wall, as seen during my time in Eritrea in 2017 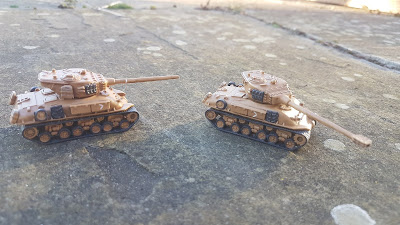 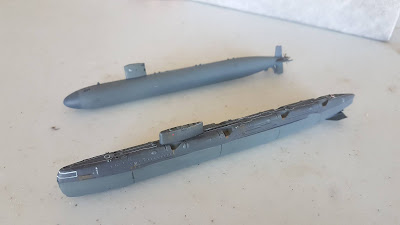 More boats in the "long ago" pile, a 688I SSN and Echo II SSGN in 1/700. The latter has a 3D printed lower hull as the plastic kit is made from is a waterline model 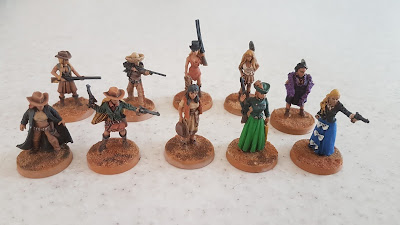 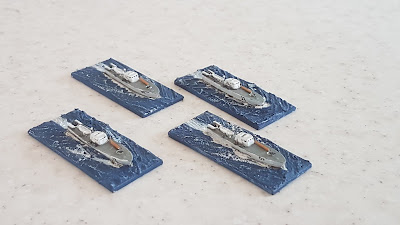 RN MTBs from the 1941 Hong Kong squadron. I created the 3D files and printed these 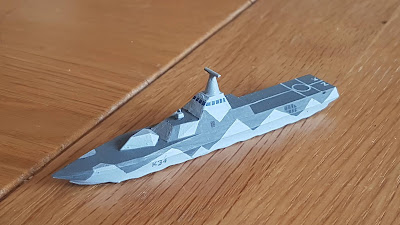 Swedish "Visby" class corvette for my "Bulldogs Away" collection. The print wasn't brilliant so plenty of filler needed. 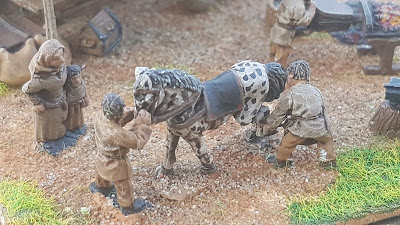 Laura's pony Domino immortalised in 15mm. The real thing did his best to kill Laura on several occasions this year. 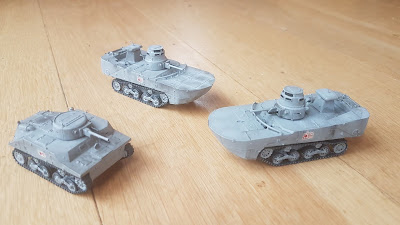 Japanese Ka Mi amphibious tanks in 20mm. A good example of the cost-effectiveness of 3D printing; if I'd bought similar sized traditional models the cost of those models would have been less than a 1 litre bottle of resin - and these three vehicles only used a small fraction of the contents of the bottle.
Ruleswise, apart from the ancient fleet action set I worked up a campaign system for the naval side of the Haitian Civil War ("Salnave's War") to accompany Spithead's models covering the war, statted up the Austrian and Italian fleets of the Lissa campaign for "Dahlgren and Columbiad", and completed a naval campaign system for the Balkan Wars of 1912-13, again finishing a project that has been on the go for a decade or so. I also started work on a solo board game covering convoy escorts in the North Atlantic in WW2.
Of course I had planned to document all of this in the blog, but for some reason i never got as deeply into writing as I should have done. I guess there's various reasons for this, none of them satisfactory. Must try harder next year.
So there we are, not a bad year on the modelling and writing front - pretty dire on every other.
Adios 2020, I won't miss you.
Posted by David Manley at 20:40 6 comments: