This weekend was Rory McCreadie's memorial battle of Trafalgar wargame. Rory's birthday was on October 21st but alas he died before seeing the game he'd so keenly wished to see become a reality.

The game itself was played on the 20th at the Entoyment shop in Poole (it was my first visit, what a lovely place!). We fought out the battle using a modified version of Osprey's "Fighting Sail" which plays a lot better than the original - still quite bloody as more than one 74 went from pristine to shattered in a single broadside, but less so than the original. I commanded the rear third of the Alied line, playing the role of Gravina and Alava, facing off against Cuthbert Collingwood's Lee Column. Africa attempted to engage the head of  or line but that was sheer folly and she was reduced to matchwood very quickly. Our fleet admiral decided that offence was the best form of defence and so we headed upwind slightly to close the range and attempted to commence a "hook" around the rear of where we expected the British lines to be.  The was never really going to work but it did mean that Collingwood and his leading ships sailed into something of a cul de sac and were quickly overwhelmed - for the second Traf refight in a row plying the allies Royal Sovereign was the first ship I captured. As the rest of the Lee Column came up the battle descended into a fierce close quarter battle. As in the real action I wasn't really sure what was going on elsewhere, other than to see that our middle squadron and the head of the British Weather Column shot each other to pieces (Victory pierced the line, the following ships were not so fortunate) and the head of our line doubled back in an attempt to get into the action which was starting to be successful as the game ended. 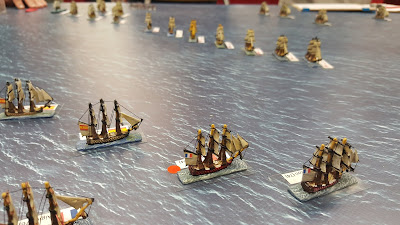 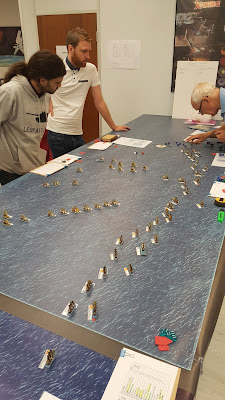 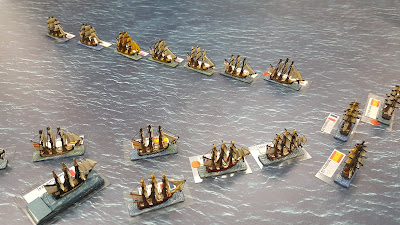 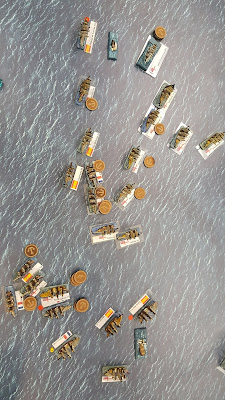 Fighting Sail uses a fleet morale system, with each side having a morale point level based on their starting forces which is eroded through damage and ship loss - when a sides morale points fall to zero the fleet disengages and the battle is lost. The scores for both sides tumbled and things could have gone either way but in the end our gunfire began to tell (and I made some wicked saving throws to stave off some heavy damage at the end), and it fell to one of my Spanish 74s, Montanes, to fire the broadside that finally reduced the British score to zero and to secure victory for the allies. 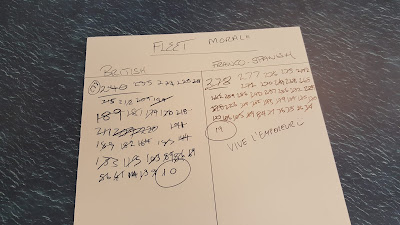 The game itself was great fun, played out in very good spirits. Rory would have been very pleased with the result!

I stayed over on Saturday night and on Sunday we played out a game between the Royal Navy and two pirate factions. The governor and his daughter were heading home to England with the fortune he had amassed whilst in the East Indies across a dangerous stretch of the Indian Ocean whereupon they were set upon by Chinese and Arab pirates. A fast, furious and fun game ensued, in which the Governor's transport was captured by the Chinese, then by the Arabs, follwoing whicjh a see-saw battle of boarding and counterboarding saw the prize change hands 6 times. In the end the Chinese were victorious, the Arab ships being heavily damaged and the Royal Navy sloop and schooners crippled, but able to escape to tell the tale. Another jolly good game, and literally laugh-out-loud fun! 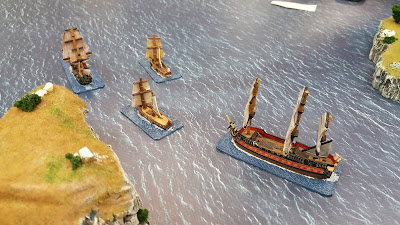 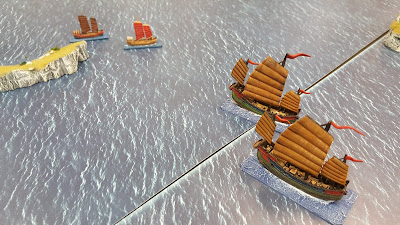 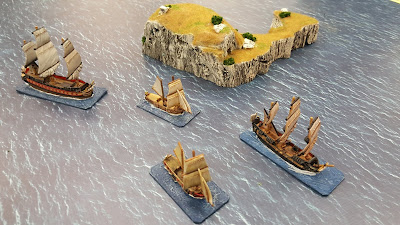 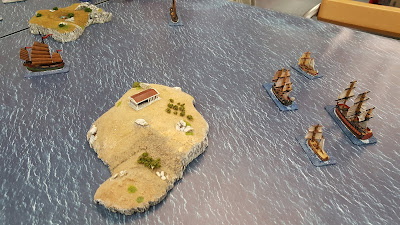 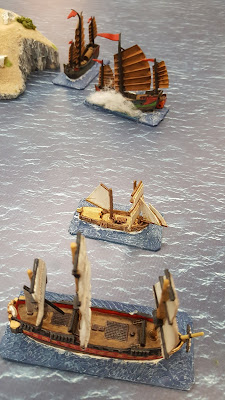