By now it is apparent that a pattern has emerged with regard to gaming at Berkeley Vale, in that we try something new to me, I knock up some models and then we NEVER PLAY IT AGAIN! not only that, but the subject in question isn't on my plan for the year and thus I'm hit with the "ooh, shiney" bug. Well its happened again, this time the subject is post-apocalyptic "Road Warrior" kind of stuff. We played Al's 20-odd year old, never played before copy of Thunder Road a few week back and now, thanks to Matchbox, Hotwheels and a pile of scrap bits and pieces I have the makings of  a nice little collection.

Its another opportunity to let one's imagination have fun, and no-one will be able to tell you that you've got the detail wrong :) 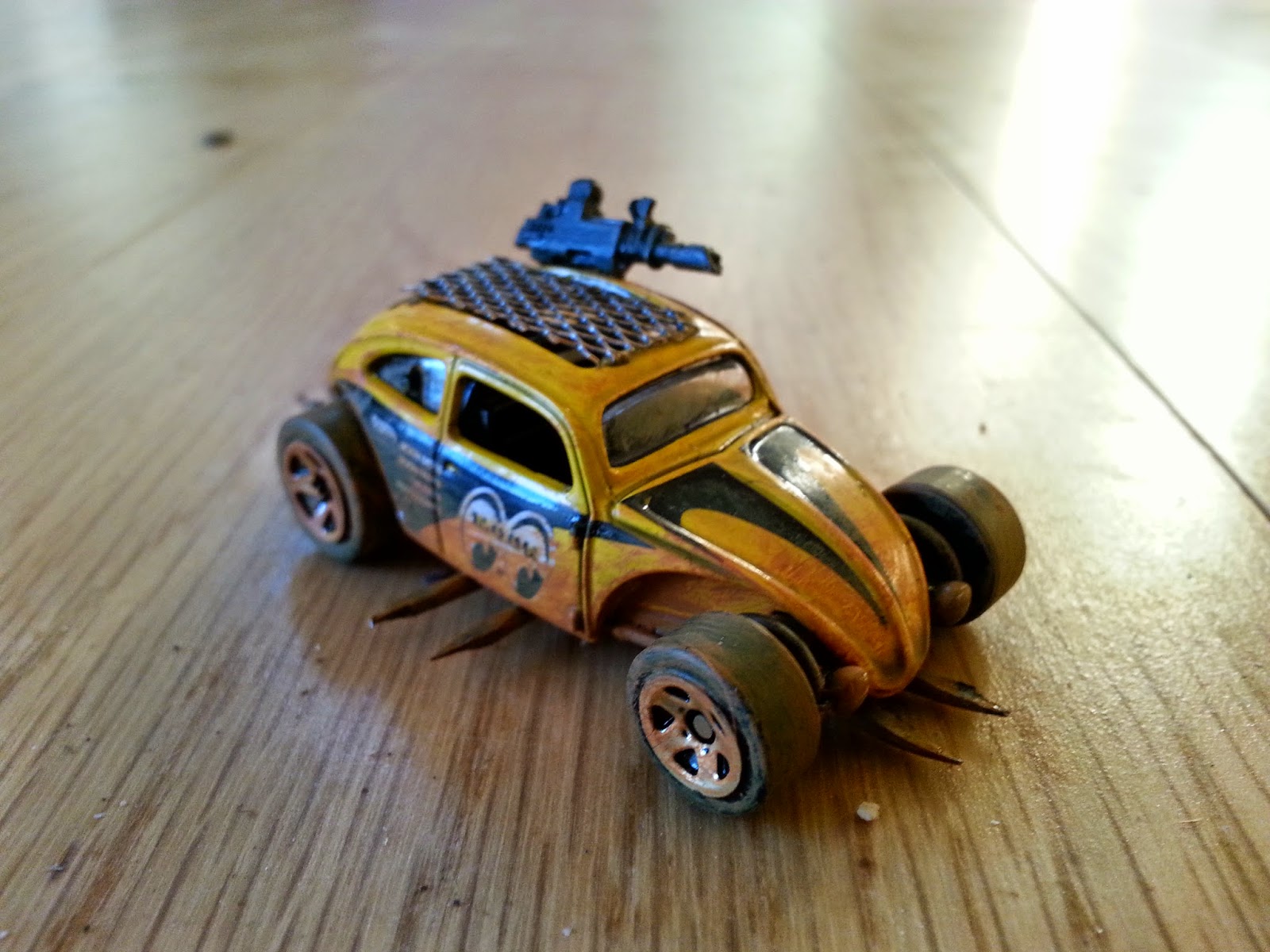 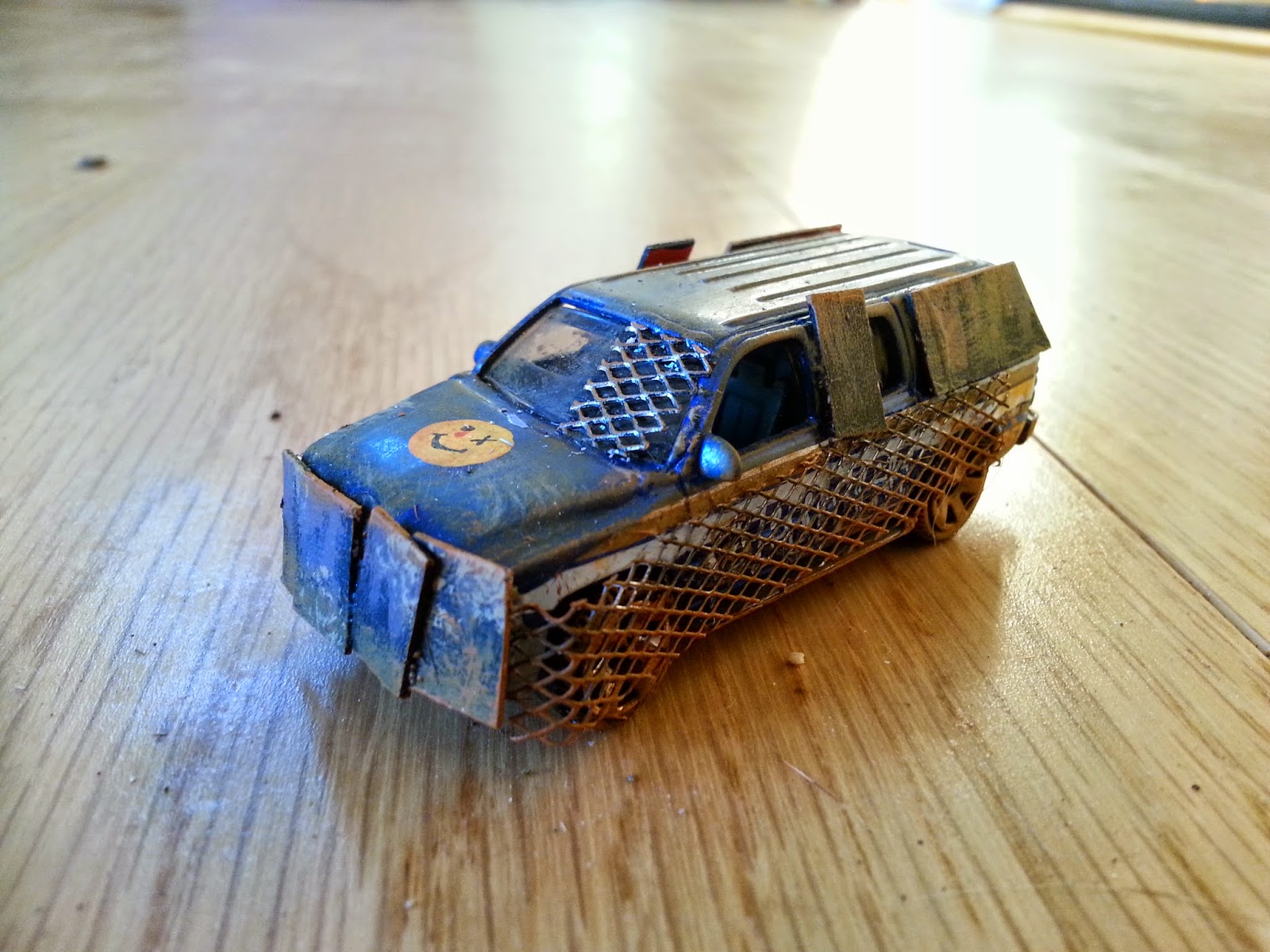 As hapens so many times in wargaming, Hobby Craft and Halfords are your friend, with lightweight metal gause making ideal mesh screens and corrugated cardboard just perfect for that "found in the scrapyard" applique armour look. 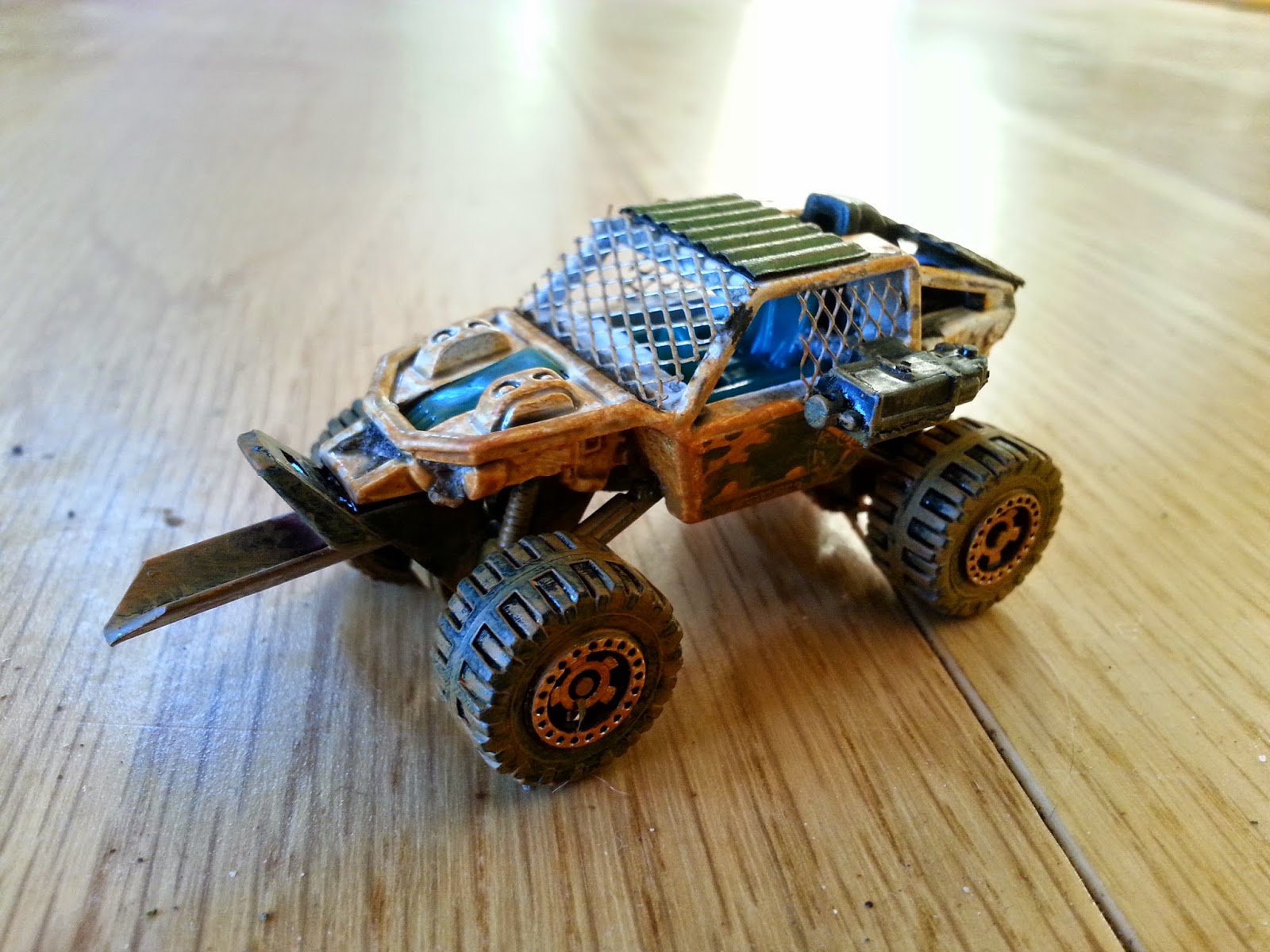 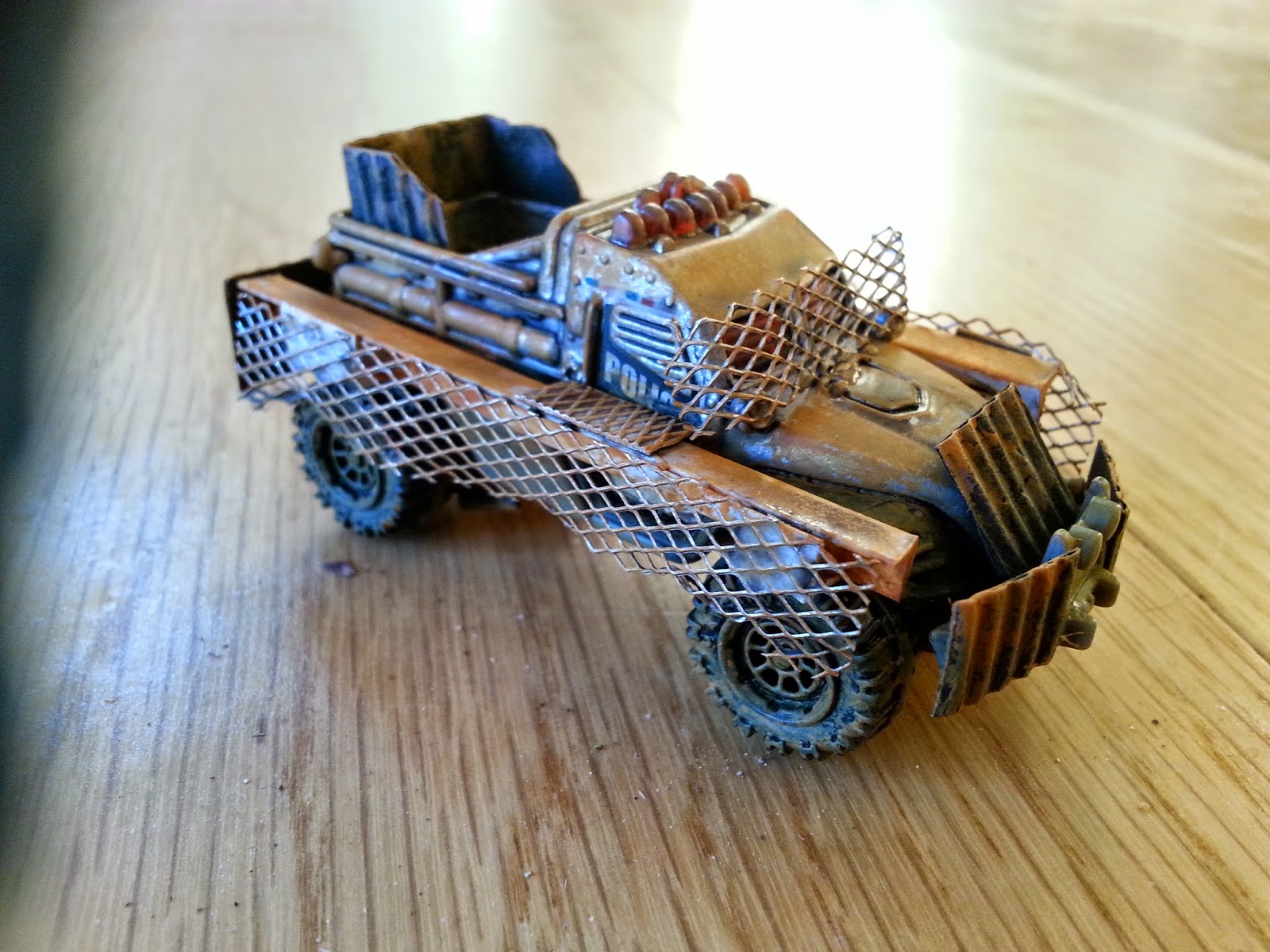 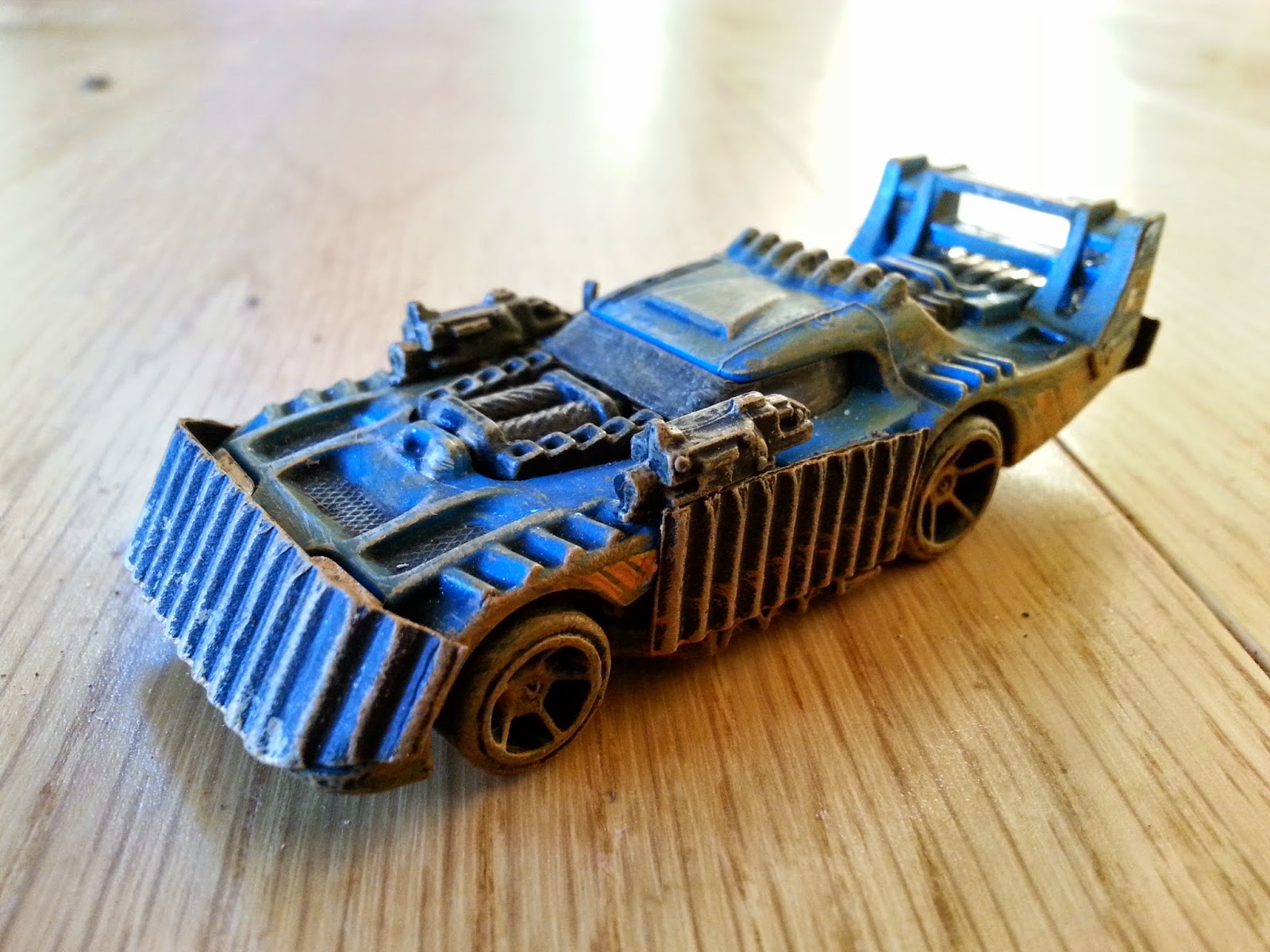 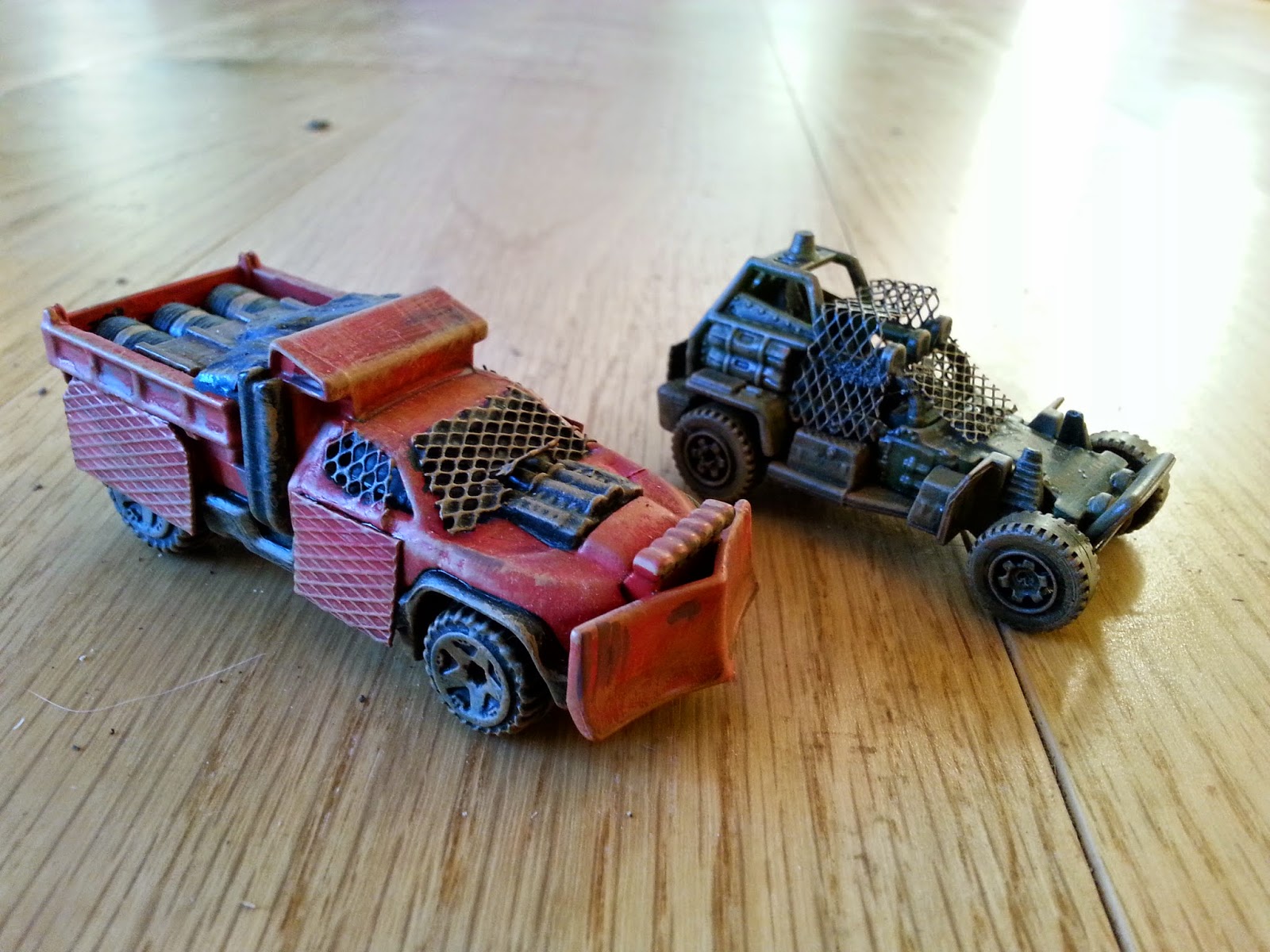 I have a bag of cars left to do, and I often take a look in the toy aisle when I'm doing the weekly grocery shop to see if there's any new cars or buggies that look useful. The main things I'm looking for just now are a bus and petrol tanker for a "Mad Max 2" finale kind of scenario. Oh and rules. Oh, and figures! (and an autogyro would be nice too!)

Any suggestions for those most gratefully received :)

Last night saw the first outing for my "War Rocket" collection at the Berkeley Vale club. My previously completed Galacteer, Valkeeri, Imperial and Pirate fleets were just recently joined by a Zenithian saucer fleet (which had made a circuitous route from Wargames Emporium to True Cambridge via that fake one over to the East). War Rocket is a quick play and very deadly set of rules, as we found out in the two battles we completed.

In round one Imperial (me) and Valkeeri (Rodger) squadrons joined to face off against the Zenithians (Shaun) and Galacteers (Graham) in a small asteroid field. 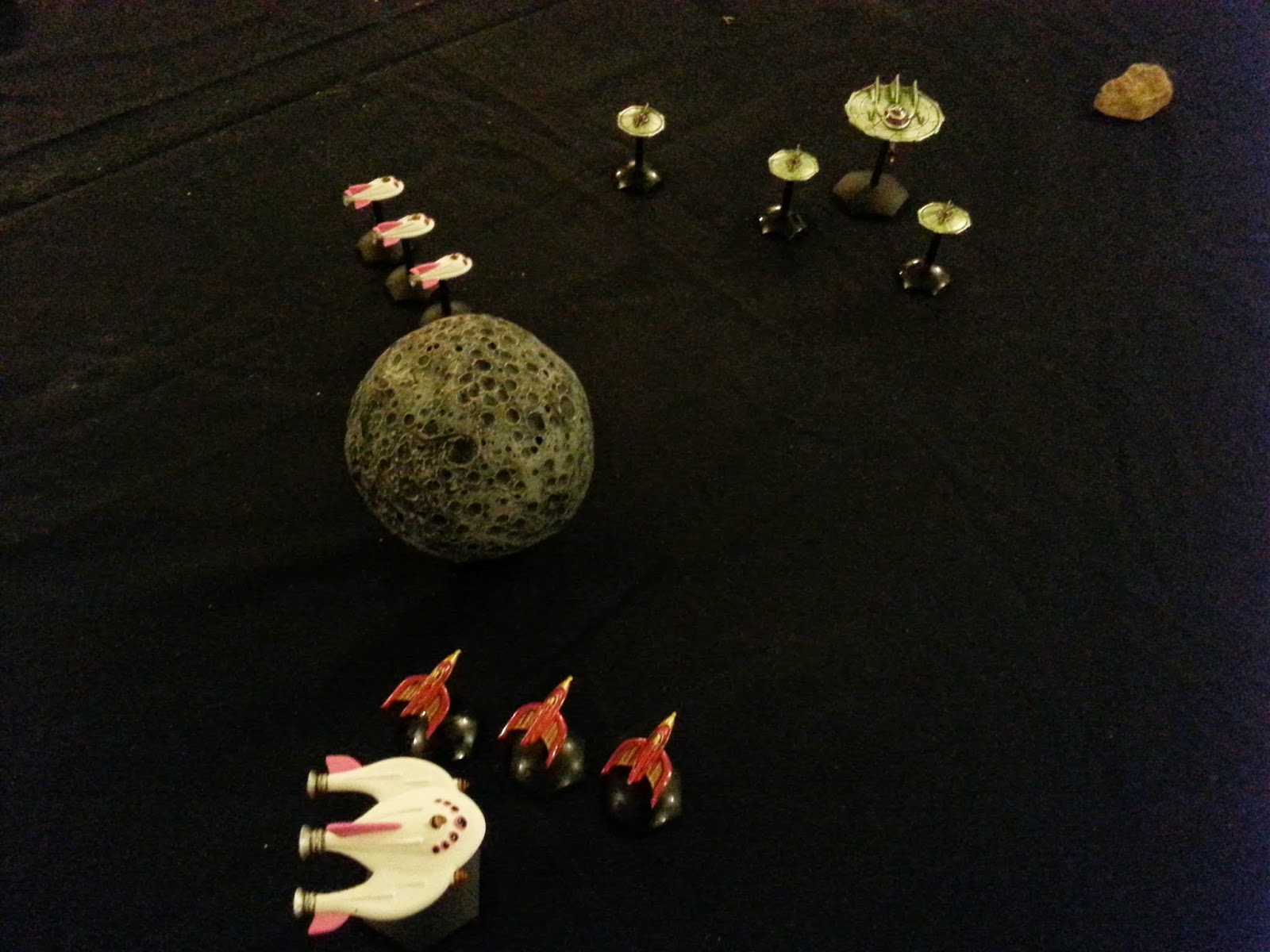 The Zenithian squadron menaced by Valkeeri  Class I rockets whilst the Valkeeri Class III and Imperial Class Is make their way around a small moon.

Carnage ensued, but the gallant Imperials and their lovely Valkeeri allies were vanquished. Some useful learning points - large Imperial ships are slooow, and the small Galacteer fighters, if handled well, can be a game changer as they activate last and thus have the drop against most opponents. 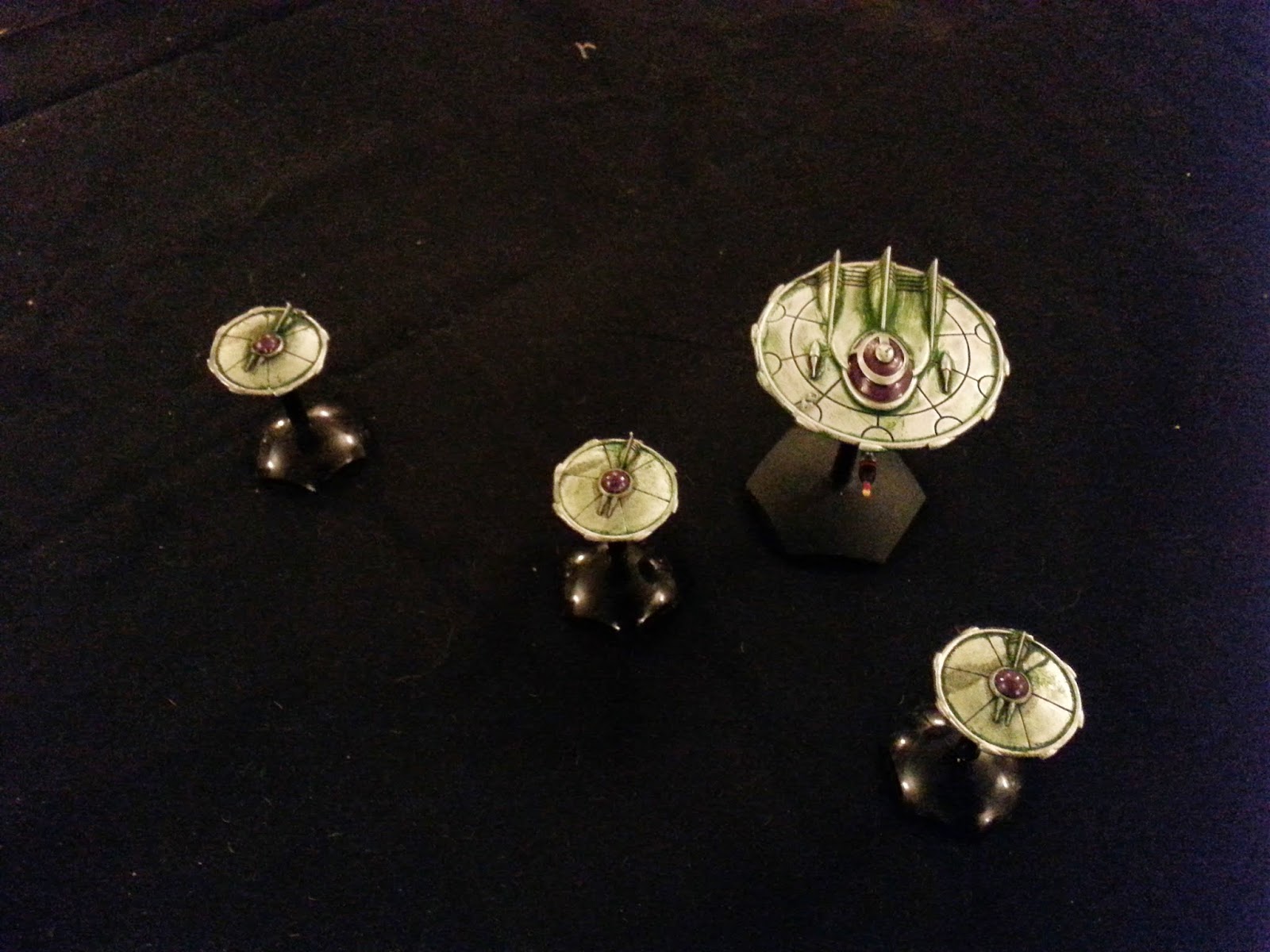 The Zenithian squadron before firing ensued

Round two saw a space station (actually an old sink plug) added to the mix, whereupon was an OOGV ("Object Of Great Value"). The object of the game was to board the station, take the OOGV and exit the table.  We mixed up the sides and now the Galacteers (Shaun) and Valkeeri (me) faced the Imperials (Graham) and Zenithians (Rodger). 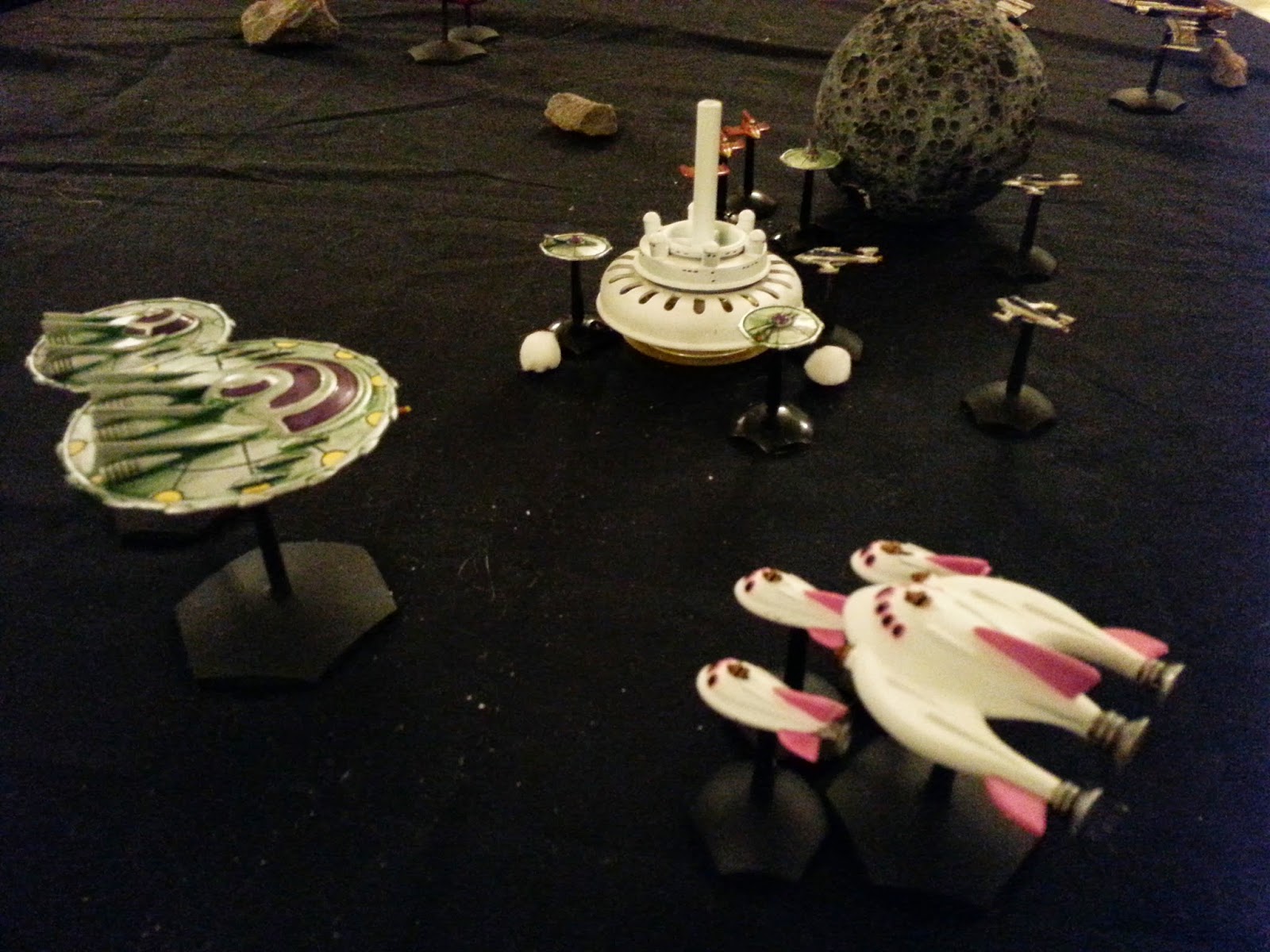 Zenithian and Valkeeri ships square off whilst Zenithian and Galacteer Class I rockets make their boarding attempts. At the end of the next turn the table was MUCH clearer!

The initial Zenthian and Galacteer plan was to send small ships in to board the station whilst the rest of the fleet provided cover. Easier said than done though, and made harder by the fact that docked ships counted as "stunned" and so were far easier to destroy - everyone who attempted to dock was bown to smithereens in short order. As was the Zenithian squadron which succumbed to some good tactics (and a few lucky shots) from the Valkeeri. On the other side of the table the Galacteers and Imperials chased each other around some asteroids and things were looking tense for a while as one of the Galacteer cruisers found its line of fire blocked for a while by a large lump of space rock, allowing the Imperials to make a (slow) dash for the station. But in the end the Galacteer/Valkeeri alliance prevailed, the last enemy ships were destroyed or driven off and victory was called. 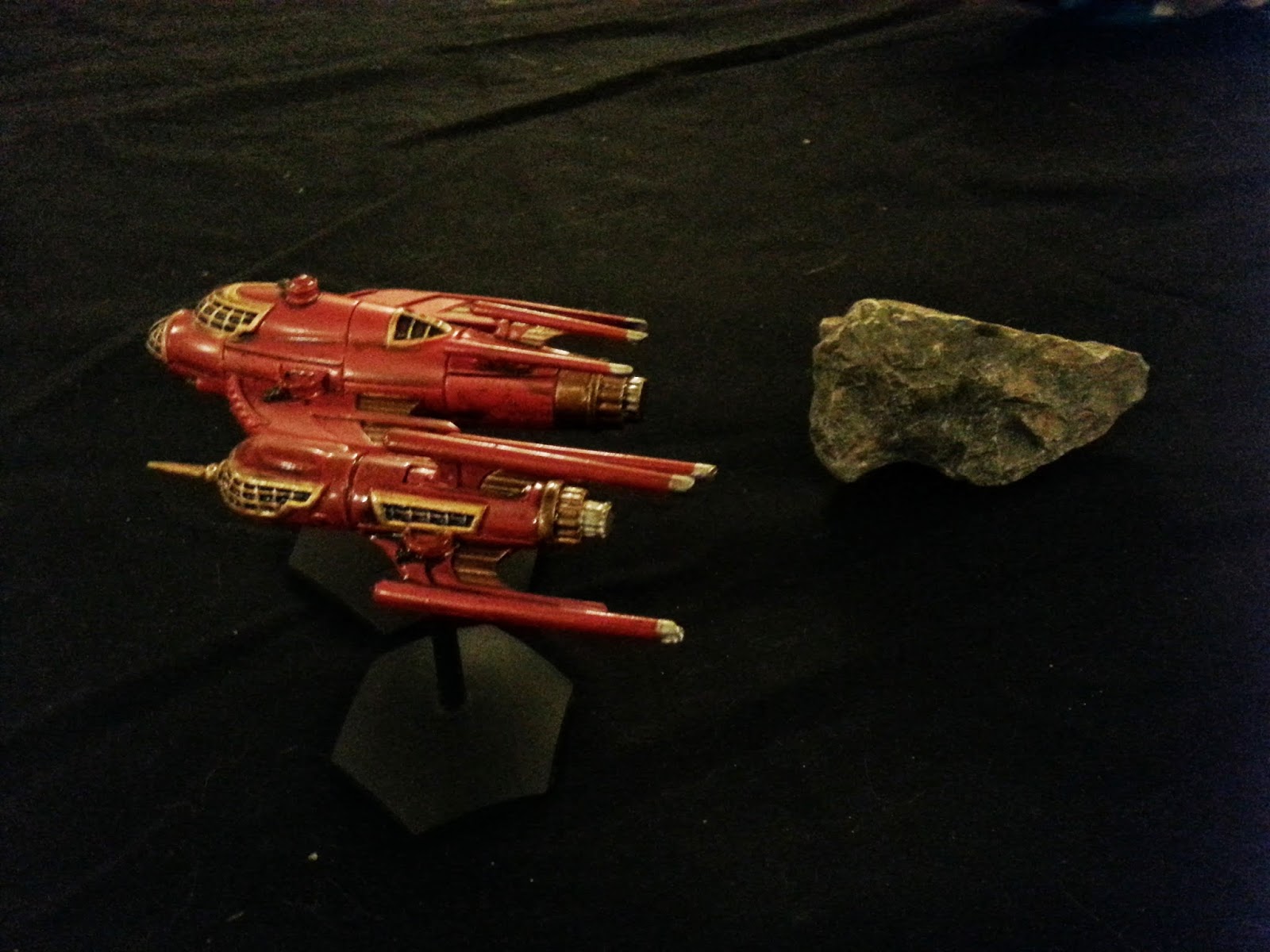 The slow-moving Imperial heavies on their way to a destination with disaster!

More learning points from this one - docked ships are incredibly vulnerable (seems reasonable), so the best way to "cover" them is to kill off all the bad guys before moving in to dock. 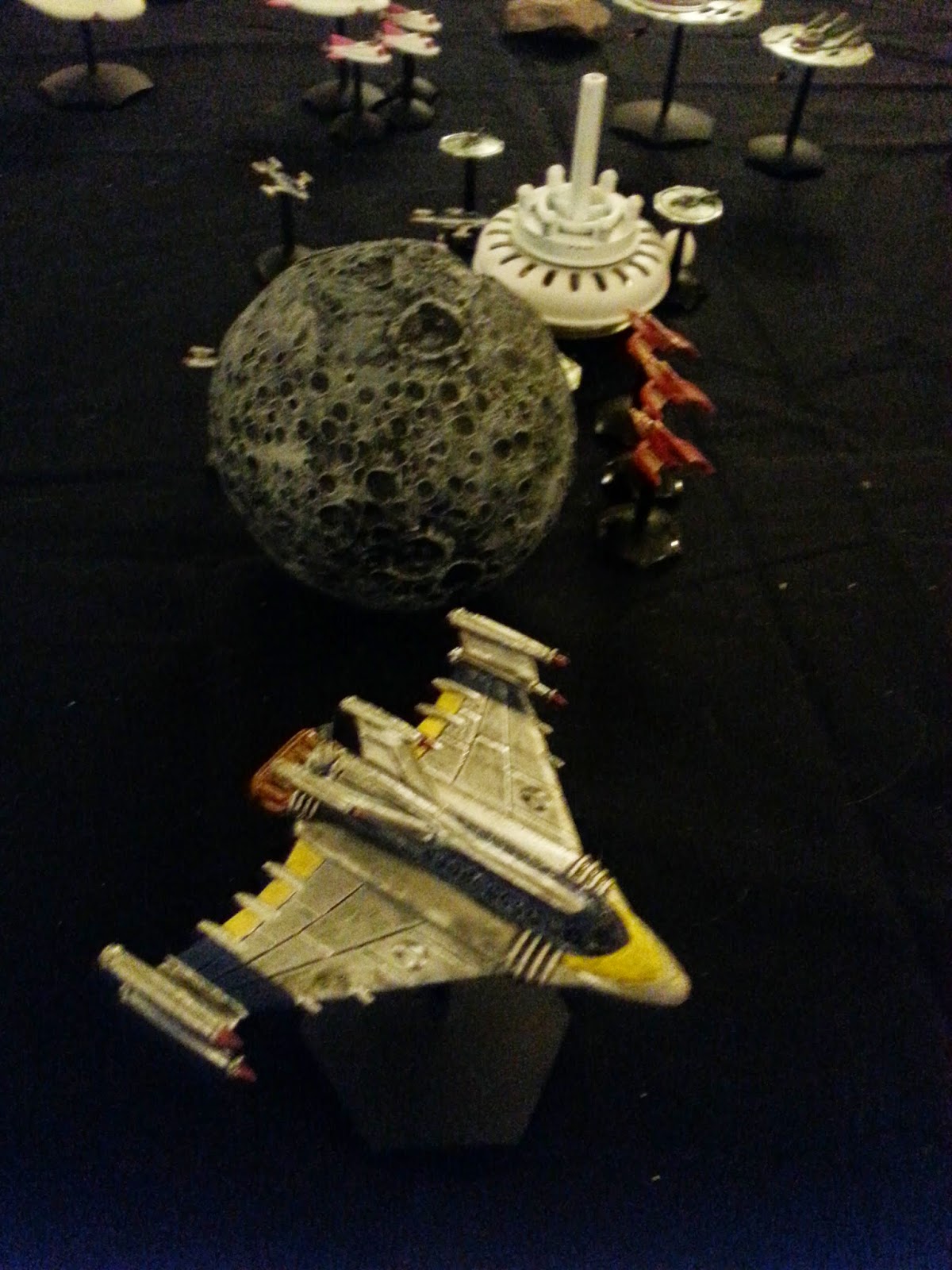 The Galacteer Class IV moving to engage the Imperial heavies

Anyway, a fun time was had by all, even Rodger despite being on the receiving end of a pasting in both games. More games will undoubtedly be played and some more interesting scenarios developed as we introduce more of the advanced and special rules.

Great fun, and next time I must remember to upload some Flash Gordon sound clips on my phone to play at opportune moments.

My only regret was that club member Gordon wasn't there last night..... :)