Another couple of evenings playing with 3D Builder have left me with this, a US Navy PC-461 class sub chaser which will work out at a shade under 90mm long in 1/600. 3D Builder is a pretty simple tool to use but with some thought it can turn out perfectly acceptable models. I still need to work on getting up to speed with a more capable package, but for now this seems fine. Alas I can't print this until Monday to see if it actually works :)

A couple of weekends ago I was chatting with Mark Chandler and Bob Blanchett in Australia and for some reason the Matilda Hedgehog came up in conversation. For those that haven't heard of it, this was an Australian adaptation of the Hedgehog ASW spigot mortar with the Matilda tank, the idea being that the Hedgehog rounds would be ideal for taking out Japanese bunkers. I'd mentioned that I have an Airfix one in a box (unmade) but how it would be cool to have one for my 15mm collection.

A few hours later after a frantic burst of 3D modelling I'd created a Hedgehog launcher which I scaled to fit on one of Mike Bergman's lovely 1:100 scale models. Three hours after that I had my forst prints completed. 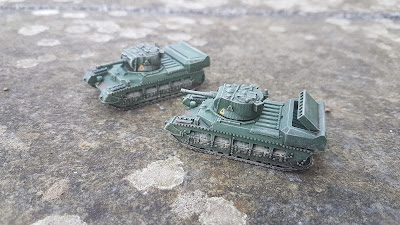 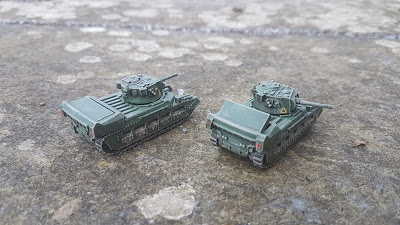 Its taken me a couple of weeks to get them painted but I'm pleased with the outcome. The launcher box was quite tricky to make (at least it was for me). It won't win prizes for accuracy but it captures the feel of the real thing quite nicely I think.

Anyone wanting to make their own can download the files from Thingiverse: