My current area of interest and rule development from a naval wargaming perspective is the Renaissance, where I've been building up some nice generic squadrons of galleys and other oared fighting ships. However, a rummage through the "lead pile" the other day uncovered a box of old Valiant Miniatures 1/1200 Armada period ships, some new in their packaging (from when "The Keep" sold off all their stock), some bought painted from Ebay but very heavily damaged. So my Renaissance project has expanded slightly to bring these in and over the last week or so I've started to renovate the battered ships I got from Ebay.

So the first ships I've had a go at doing up are a couple of galleasses, a small galleon and a couple of carracks. Due to their origins they retain a rather war-worn look but I'm pleased at how these have scrubbed up and I'll be adding to their numbers slowly over the coming weeks. 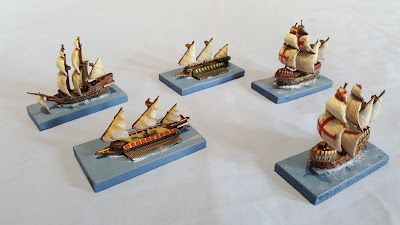 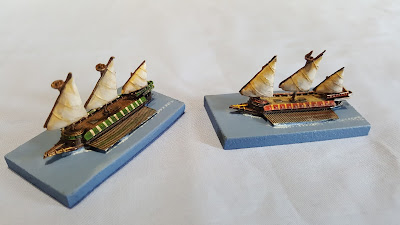 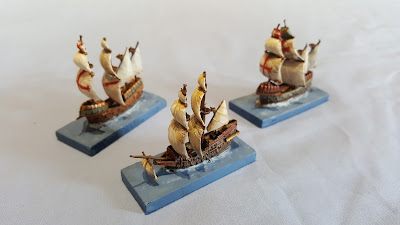 Unfortunately they seem to have been stuck onto their rather thick bases with some incredibly resilient glue and I'm fearful of damaging the models if I try to hack them off, so they are likely to stay on these rather than the thin card that the rest of my ships are based upon, but I can live with that.
Posted by David Manley at 12:30 1 comment: