My last set of Shapeways models included some seaplanes. I've already posted pics of the Sopwith Baby, but at the time I'd not snapped the others, so here they are:First up, a Hansa Brandenburg W.12. Following on from my hand painted lozenge for my "regular" late war German fighters and 2 seaters I thought I'd try something similar for this.

I'm not sure the effect is quite as good as the other models - this naval lozenge is a real pain in the a**e The other two are a Macchi M5 and a Hansa Brandenburg CC. Having decided to avoid the Italian front I've gone and blown this plan with these and a couple of Lohner 2 seaters, but I think If I restrict myself to the naval front then perhaps its not so bad

I might end up getting another couple of these seaplane fighters, they certainly are an interesting diversion from usual scouts.


Anyway, I'm being diverted from all this by Philip's Warhammer 40K fascination - working on "Daddy's Army" just now (you'll have to wait and see what I'm working on though)
Posted by David Manley at 10:16 3 comments:


Having posted about the battle of Cape St Vincent earlier in the week and thinking it would be fun to try a refight using my fleet action rules that evening I unfolded a terrbile series of events. First deciding that the rules were tosh, next embarking on a major rewrite of said rules, then looking at the two dozen or so 1/2400 models that i have left to paint. Now this morning I've done about half of them, plus all the struck ships and fallen mast markers that I had also failed to paint previously, plus thinking about whether can convert any of the renaissance galleys i have in that scale to become Russian and Swedish galleys for a Baltic game, and now I'm busy looking at revising the stowage I have for them and the way I'm identifying each model, which will probably become a project in itself. And all this as I'm supposed to be painting up models for a photoshoot for an article I've written. AND after I'd developed a plan for the year's wargaming and modelling that didn't include 1/2400 fleet action games!


I really must learn to get some focus here!!
Posted by David Manley at 10:02 3 comments:

My latest arrival from Shapeways was waiting for me on Tuesday evening. I've just completed the first three models, all Sopwiths. The first two are a couple of Sopwith Camel "Comic" nightfighters. I've always wanted to do one of these since reading an Airfix magazine article about them back in the 1970s. The "Comic" had two lewis guns on overwing mountings rather than the Vickers' guns on the cowling (I believe to shield the pilot from the gun flash and help him keep his night vision) 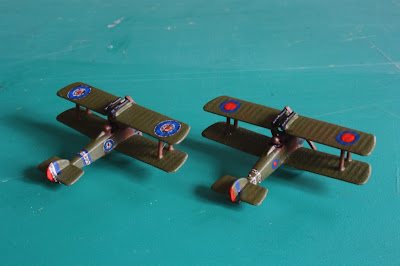 "Comics" fought in drab schemes to reduce their visibility at night. I've seen two examples, one where the normal RFC roundels are smeared with black paint to make them less bright, the other where the white portions were overpainted with red or green, so I did one of each. the metal cowlings are also smeared with black paint, again to reduce their brightness. as a result the models have a rather scruffy look about them, but this seems in keeping with some photos I've seen of similar models in larger scales. they certainly look mean! 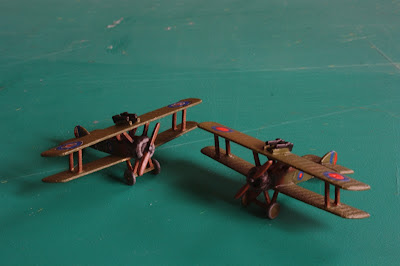 The third model is a Sopwith Baby seaplane fighter. This is a charming model, that sits nicely with the Short 184 seaplane that I finished a while back. 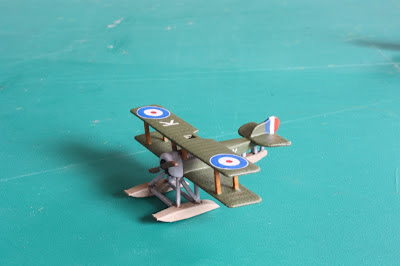 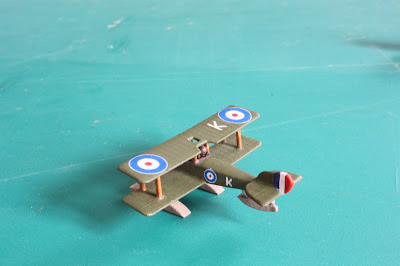 Finally, some Space Marines. Seriously. Philip has decided he wants to play 40K (many of his friends are also taking the plunge) and so he has bought himself the "Assault on Black Reach" starter set. he hasn't started painting them up yet, but his dive into GWism reminded me that I have a couple of boxes of the old "Space Crusade" game up in the loft, and there were quite a few assembled old style Space Marines up there that he could use as well. So they were brought down and just for fun I painted those up as well. Although being a boring realist I did them in OD rather than bright red or green or whatever. 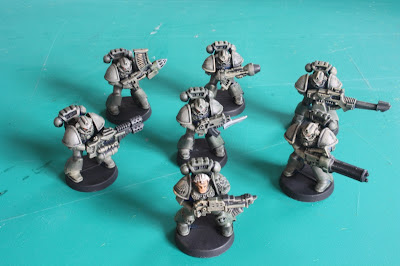 Don't expect too much more of this here, honest!

latest model off the workbench, and this time its something that I've had a real hand in designing (albeit some years back when the boat was just a cloud of electrons in a CAD package. I hadn't realised that someone had made  a plastic kit of ASTUTE until I came across it on a modelling website a few weeks back. Chinese (!) company "Hobby Boss" have done  a very good job from what i can see from this 1/700 scale model - the detail is quite impressive. 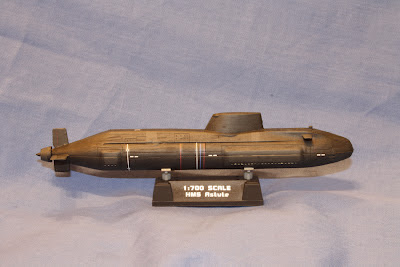 Its also available in 1/350, but since I have a half decent collection of 1/700 modern boats I thought I'd stick with the smaller version.

WW1 Oddities and Some SCW

I've been finishing off some odds and ends over the last few days. First up, some unusual French WW1 aircraft. 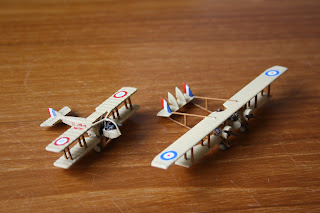 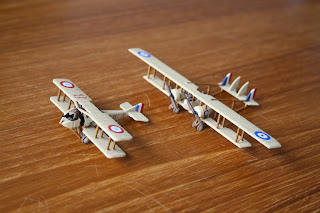 The big one is a Caudron G.4, an odd aircraft characterised by its enormous engines relative to the fuselage. I did this one in RNAS colours as (at the time of painting) I was fresh out of French roundels, and now that I have a new consignment from Dom's Decals it may get a change of ownership, but for now it gives my RNAS Tripes something to escort. 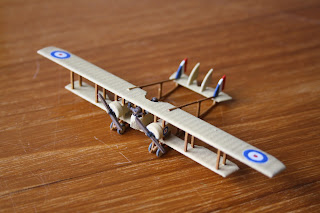 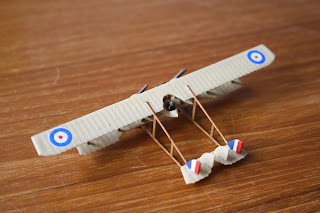 The smaller one is a Spad A.2. Even more of an oddity, this one is "mid engined" (but is no hot sports car). Instead, this was an attempt to solve the same gunnery problem that the British "pushers" managed, but solved by putting a gunner in a pod ahead of the engine (!). This is a lovely little model, to which I only added the guide rail for the nose gun (and a couple of pilot/gunner figures). 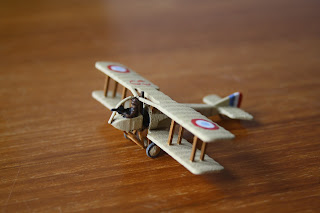 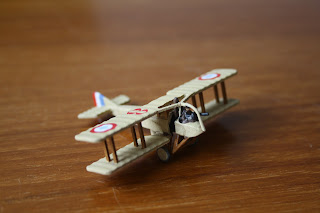 On the SCW front, some transport for my irregular units. On the left is an Ertl traction engine from the "Thomas the Tank Engine" series of toys (for those of a nervous disposition, I didn't file off his face; it is still there, hiding behind a disc of card. OK kids? move on). Now I don't know if they had traction engines like this in Spain, but I'm sure someone in the UK may have exported a few, and if not it will always do for my "imagi-nation" extension to the period. 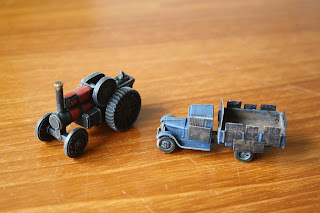 The blue "technical" is a Zvezda ZIS-5 truck, augmented into a semi-armoured personnel carrier through the addition of card armour over the radiator, door sides and the cargo space. The cab windows are covered by brass mesh offcuts which I'm using for another project. 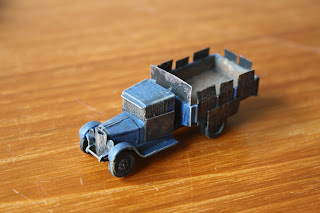 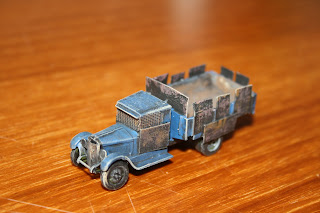 Finally, a 1/600 Thoroughbred model of CSS Chicora, one of the Charleston squadron. The ship is often described as being painted pale blue, so I thought this would make an interetsing change from the normal black or light grey. 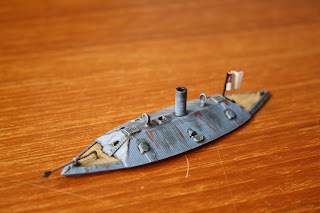 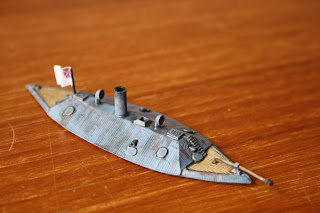 A decent model and I don't really think the pictures do her justice. Now, the ACW is off my "to do" list for the year, but this model plus an impulse purchase (infrastructure rather than models or figures) might see this change in the next few weeks......

Anyway, currently on the workbench are some naval projects. More on these later :)
Posted by David Manley at 12:14 5 comments: