One of the things that I have had in mind to try sometime is to fight a particular battle with different rules and to compare results, having seen the Society of Ancients do something similar over the years. It would seem to be an interesting group project, so I suggested this on the Facebook "Naval Wargames" group, but since there are many who don't use Mr Zuckerberg's site I thought I'd repeat it here. 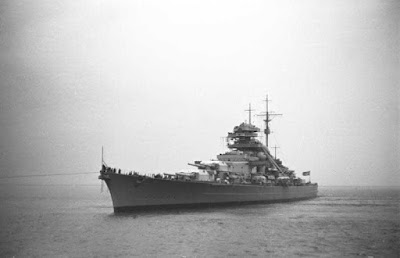 The idea is to refight the 1941 battle of Denmark Strait, ideally around May 24th this year, play out the battle and then for as many people as possible to compare notes. Nothing to stressy, just play out the battle with your local chums, then post a brief AAR to the FB group, on your blog or to me listing the rules used and the result of the game. A few people on the FB group asked about a common scenario so I'm working up a simple one page sheet that has the "core" starting points for an action commencing at 0552 on May 24th, and which lists various possible options (such as including the Suffolk and Norfolk in the action, optional rules for defective shells and turrets, etc.). I'll plan to post that here once I've had a chance to work it up properly.

Is anyone interested? For starters I'll be doing it with "Find, Fix and Strike", and I might try GQ2 as well.