A Trip To Whitehall 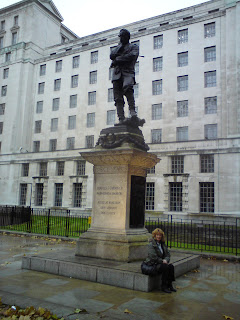 Liz and  had a trip up to Whitehall at the back end of last week. I'm a regular visitor, but I'd not appreciated that there was a rather nice statue of General Gordon outside MOD Main Building facing towards the Thames (perhaps to remind him of his days looking out at the Nile, waiting in vain for relief to arrive). It was too good an opportunity to miss, so I hope you'll excuse a picture of the good lady wife perched at the foot of the general's statue.

Not much to report on the modelling front at the moment, although the Egyptian rocket troops are almost finished and the last odd stands of Camel Corps troops have been delivered to my local expert painter, Nigel Cox, for him to work his magic. I should have some pics of his rather excellent paint jobs shortly.
Posted by David Manley at 22:10 No comments: 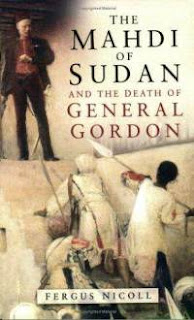 As an aside - Google Books is an invaluable resource, isn't it? I've managed to download copyright-free versions of a whole host of boks writen about the campaigns in the 1880s and 1890s. I suspect Liz's new Kindle may find itself topping up with those in the not-too-distant future!
Posted by David Manley at 17:21 No comments:

My latest painting project has been to finish off a battalion of Indian troops to support my "Suakin Front" contingent. The figures are Old Glory 15s, my first foray into figures from this manufacturer (I bought a few packs via a friend in the US, so you'll be seeing more from OG in the coming weeks). The figures are sold in packs of approximately 50 (in this case 51), which works out well given that I need 18-24 figures for a battalion using the rules on which I'm currently working. 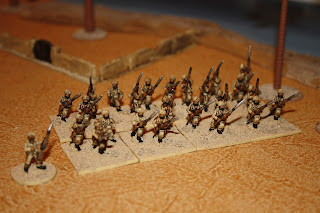 So, how do these chaps compare with the Peter Pig figures  that make up the bulk of my armies? The answer is, IMHO, fairly well, but Martin Goddard's figures have a clear edge. I'm not entirely convinced by some of the poses (especially the one apparently leaping into space from a rock), and the comand figure selection isn't that helpful - a standard bearer would have been a useful addition, so in the fullness of time I may convert one of the prancing figures.

That said, the figures are decent, fairly well detailed and paint up well. they are not as slight as PP's but I guess that plays to the fearsome repuation of the Indian troops - they are, after all, over ten feet tall old boy!

A severe lack of enthusiasm meant I only painted up half of the pack, so I have another battalion's worth left to do (and then some Sudanese). But first on the stocks to finish will be the artillery support for my Camel Corps - more of these chaps later!
Posted by David Manley at 20:01 2 comments: