Forming the Line at Slimbridge

A few weeks back I introduced the Berkeley Vale club to the full version of Sails of Glory. In the post game discussion a few of the chaps mentioned Form Line of Battle and suggested we give them a spin as well. Not wishing to dissuade my erstwhile colleagues from the joys of naval wargaming I agreed. Last night at the club we fought an introductory action, a British squadron with a 100 and five 74s (two with veteran crews) against a Spanish100, two French 80s and three Spanish 74s. We rolled for commands, Mike and I driving the Brits, Rodger the Spanish led squadron and Shaun the French. It was a sizeable action for a "first try" of the rules (and I must admit I was a bit rusty, confusing a few rules between editions, but nothing too serious). 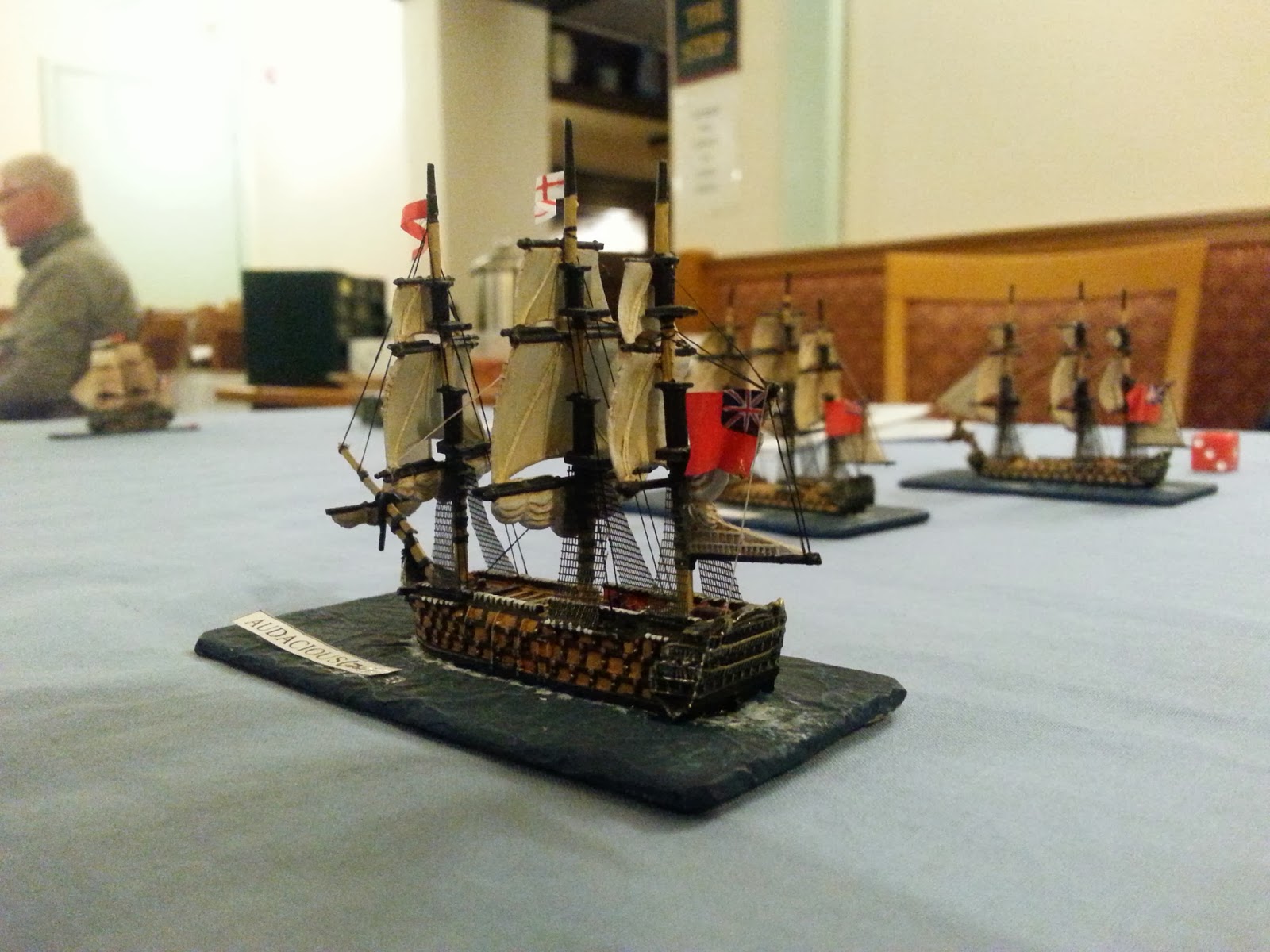 I was pleasantly surprised at how quickly the guys picked up the rules. So much so that they were running their own commands without me having to provide much guidance on the rules after about the third turn. 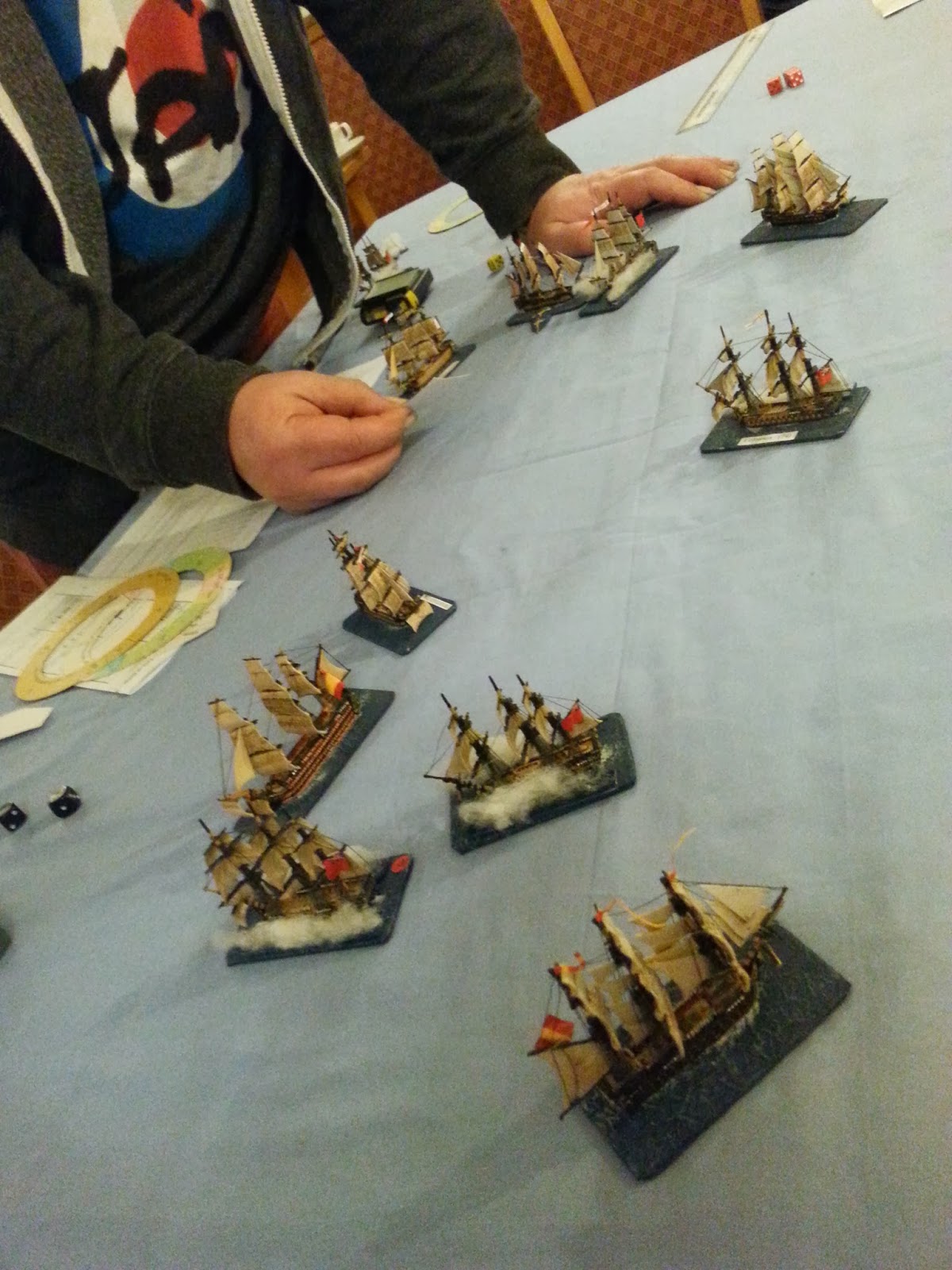 The action began in linear style with both fleets trading long range shots, but after a while Mike's training British squadron (which included the 100 gun "Death Star") took advantage of a developing gap between the leading Spanish and the French squadron. Meanwhile my vanguard British squadron and Rodger's Spaniards closed to point blank range, exchanging broadsides in a gunnery duel where the Spanards came off second best (my die rolling was uncharacteristically good, Rodger's annoyingly bad). 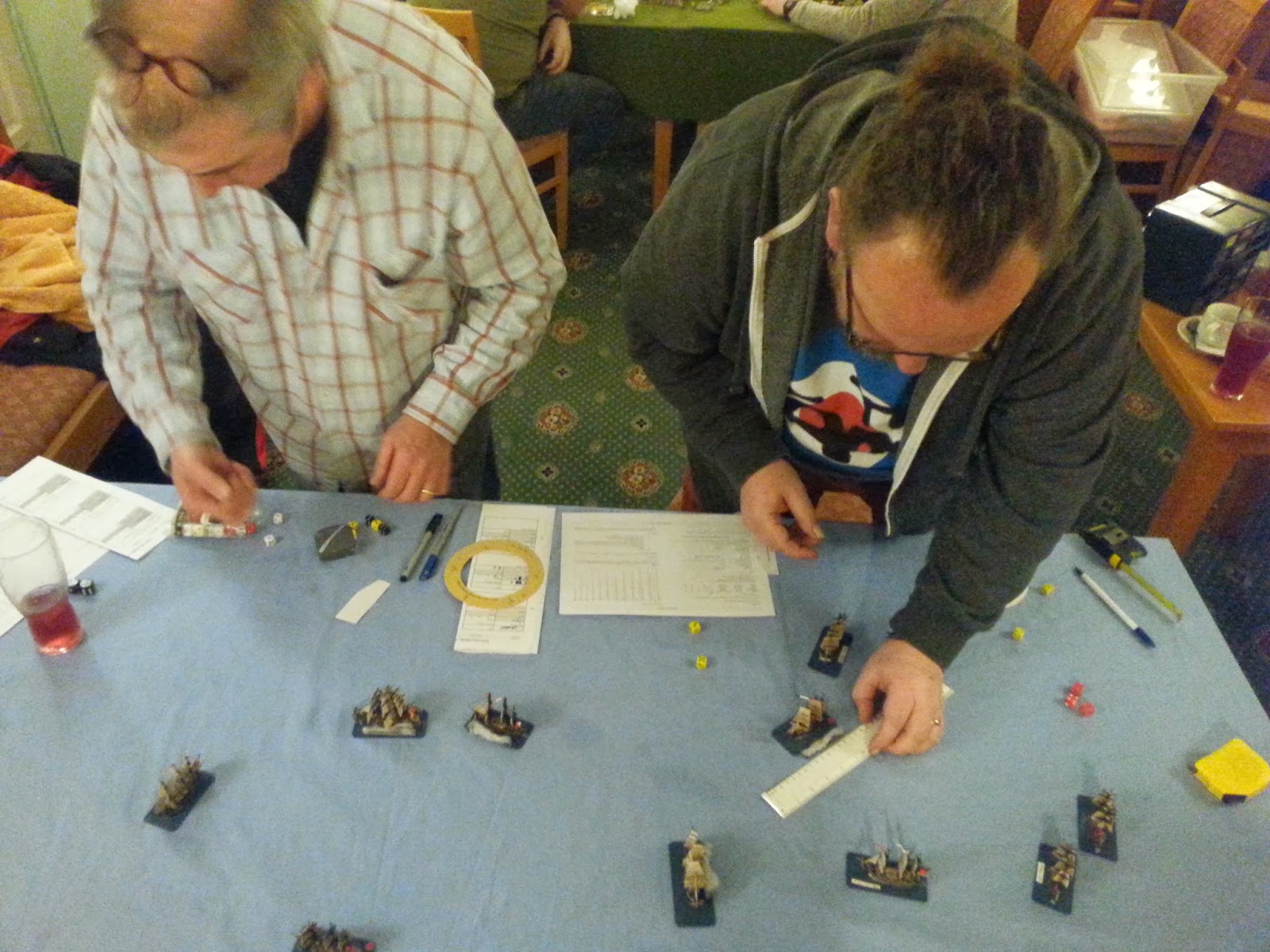 By the time last orders sounded a British victory was called. One of the French 80s had struck in a boarding action, the Spanish 100 had escaped through a squall and the remainder of the allied fleet was looking decidedly second hand. in contrast the British ships, whilst suffering a bit in the gunnery department, were still stout hulled and shaping up to bock the escape of at least two of the remaining allied ships.

The players' verdict? "Good stuff and can we have more please". so it looks as though Berkeley Vale will be following the FLoB route for age of sail gaming, at least for a while. 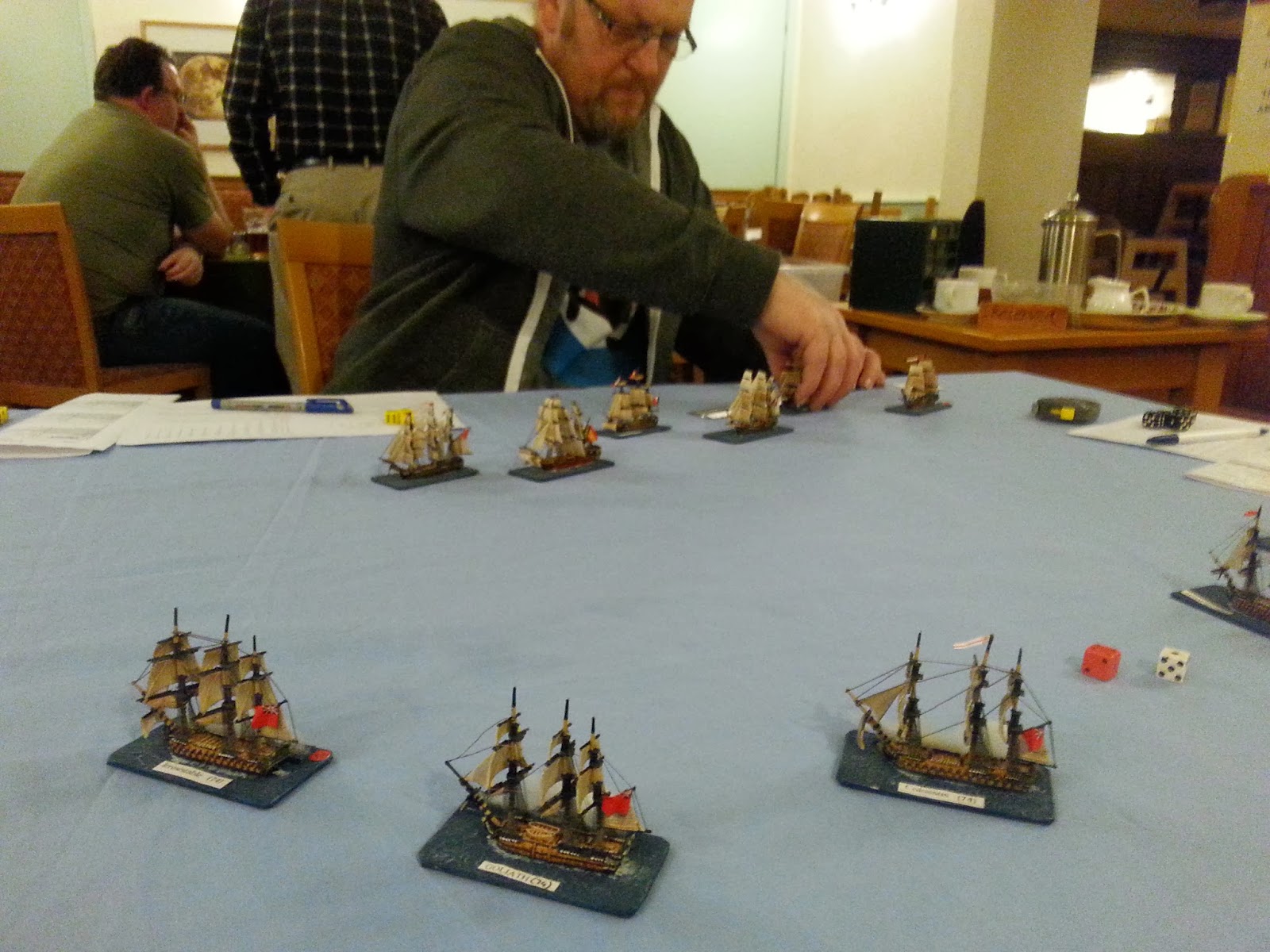 Still, all being well its Sails of Glory at the Mall tomorrow night :)

The Joy of DBx

This weekend I have been at Peter Colbeck's place for his biennial wargames campaign weekend. This time the setting was the 30 Years War, with six armies (Sweden, France, the Holy Roman Empire, Saxony, Bavaria and the Spanish Netherlands) slugging it out for supremacy in Europe. In the end the Franco-Swedish-Saxon alliance was victorious, with the French taking the star prize. The rules in use were a cut down version of DBR. And a great time was had by all. 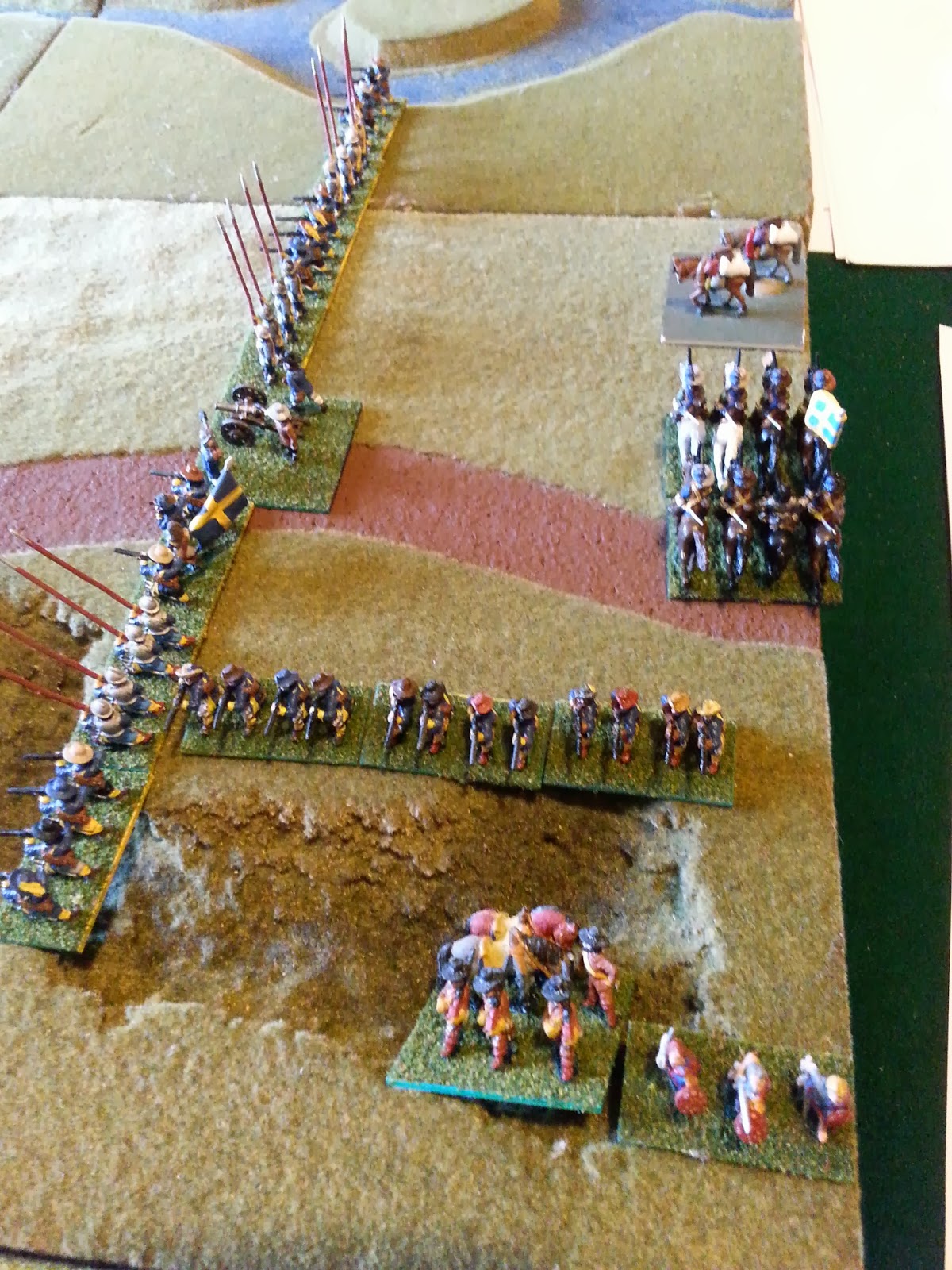 My Swedes hunkered down between a river and a deep gully, awaiting an attack from the Spanish. After  a long hard fought battle the team from Ikea emerged victorious

And the great thing about this weekend was that it reminded me jus thow much I enjoy playing DBx games. I started DBA with 1st edition many years ago and have just about kept pace with developments to date (although I fear DBA 3 might be a step to far for me, at least to start with). Over the years I've collected many armies, starting with a Wars of the Roses army and now extending to several more medievals, Saxons, Vikings and Normans, Romans and Britons, Greeks, various arab types and, following Peter's ECW campaign a few years back, various ECW, Scots and other 17th century armies. Various specialty units, such as the Farleigh Hungerford contingent for my WotR collection from when we lived nearby in Trowbridge - now joined by a Berkeley contingent with our move to that area in 2012) And I remembered the DBA league games we used to play at Abbey Wood after hours, and other DBx campaigns that I'd been involved in or run. And I'm remembering wat a fun set of rule sit is and how ideal it is for quick games and one day campaigns.

I have a nasty feeling I'll be sprucing up my existing armies and working on some camps, baggage units and other "specials" in the not-too-distant future! I wonder if I can get the Berkeley crowd interested? :)
Posted by David Manley at 17:28 No comments: