After a very hectic few weeks I finally got a couple of hours spare to try out my new participation game for the Naval Wargames Show. The subject this time is Gerry Anderson's "Stingray". I started to put together  a collection of Konami models for this some years ago but they all went missing and are now going for silly prices on Ebay, so I've had to replace them with Matchbox toys from the 1990s. That said they are pretty decent as they come, although the Terror Fish benefit from a bit of  a paint job. 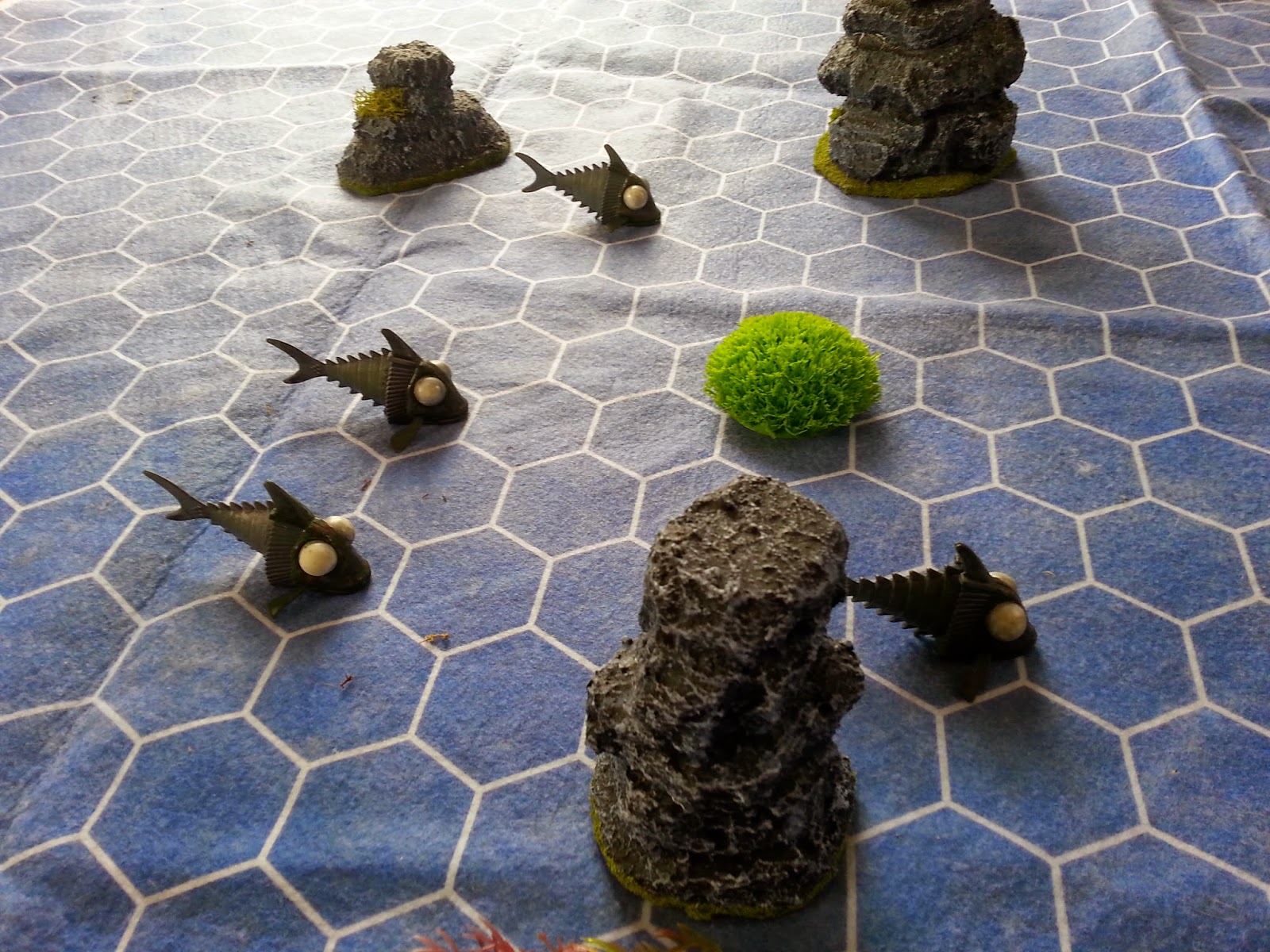 Terror Fish move in to engage the accursed Terraneans! 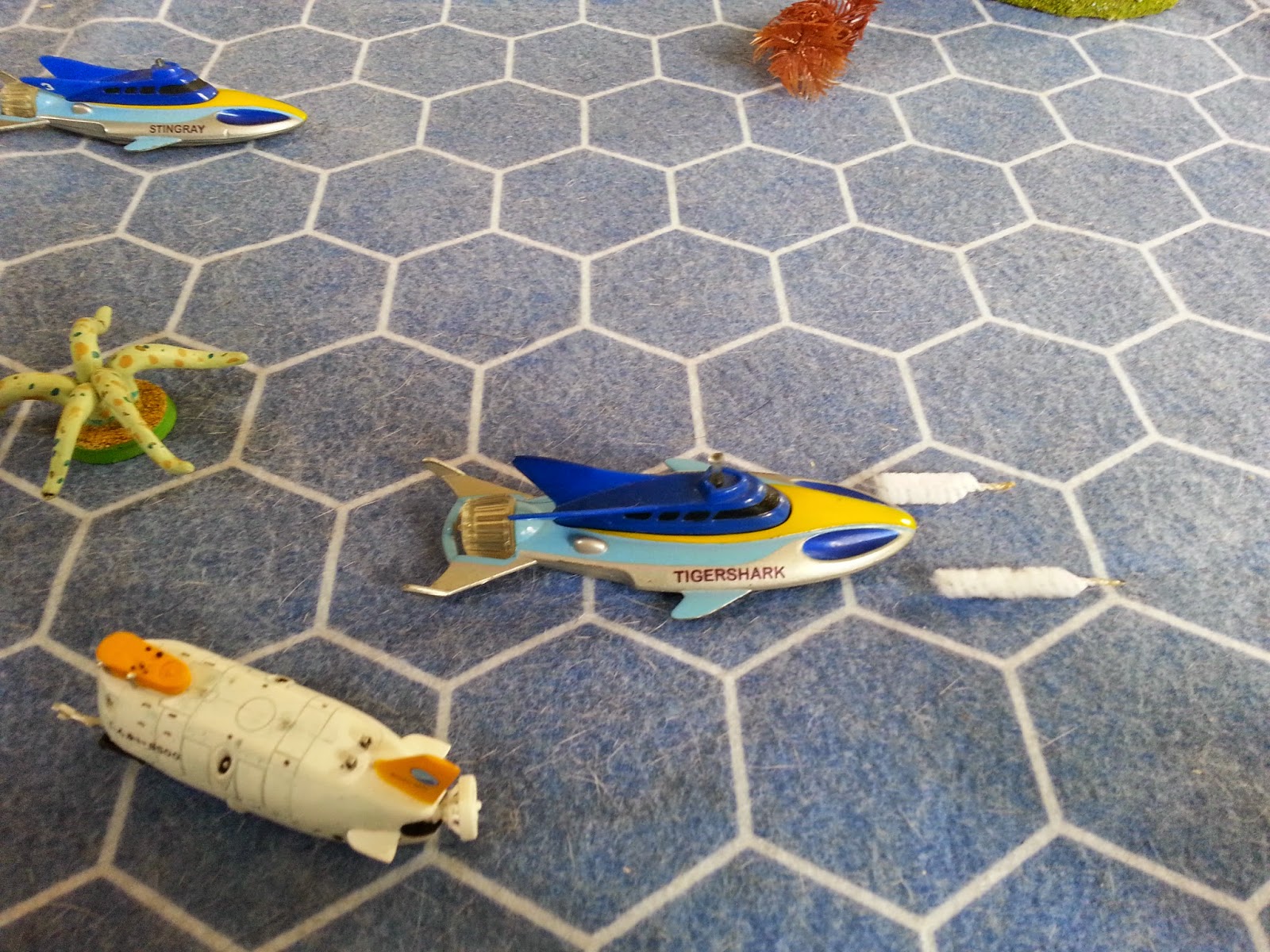 Stingray and Tigershark move to cover the research sub 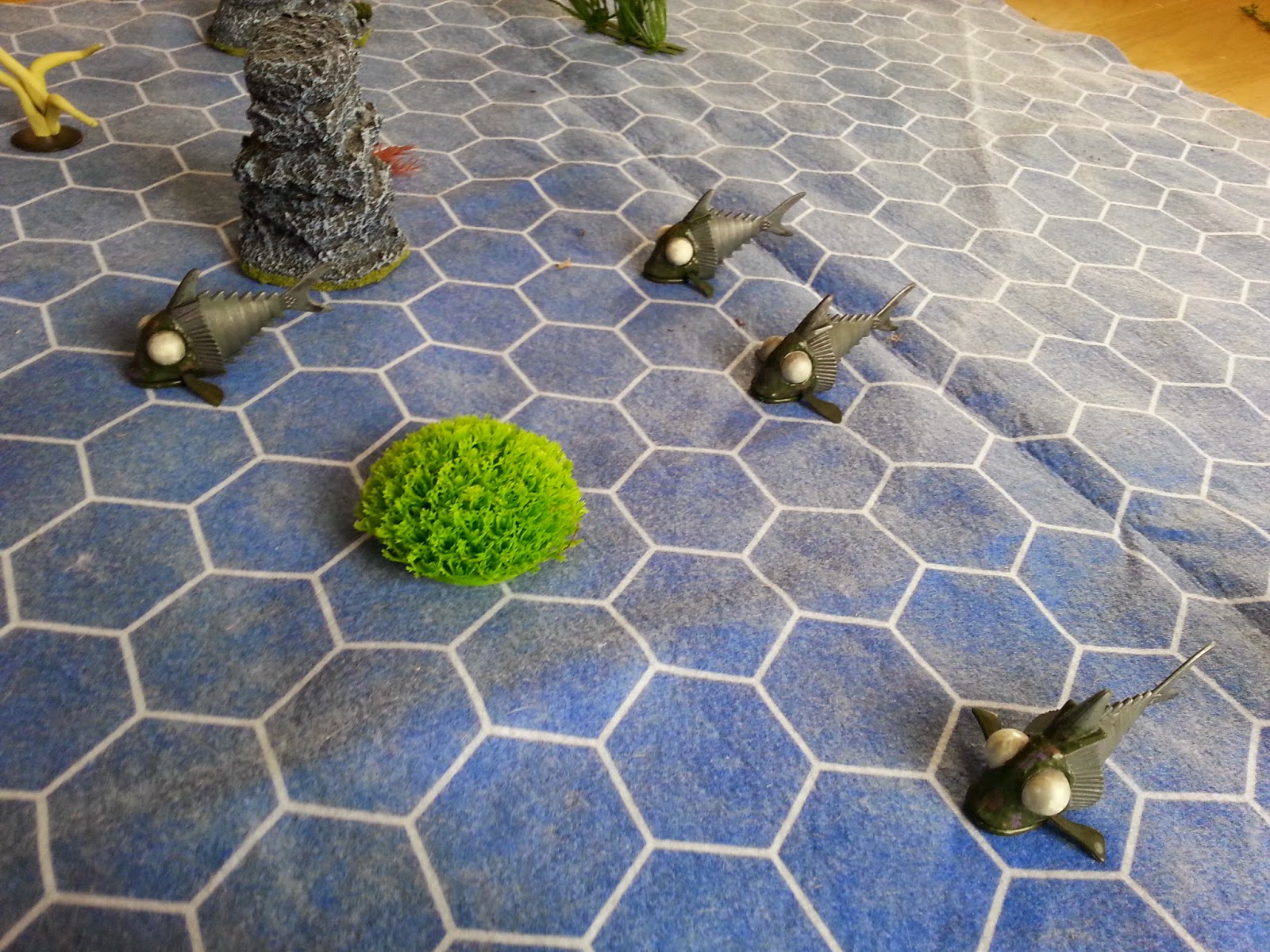 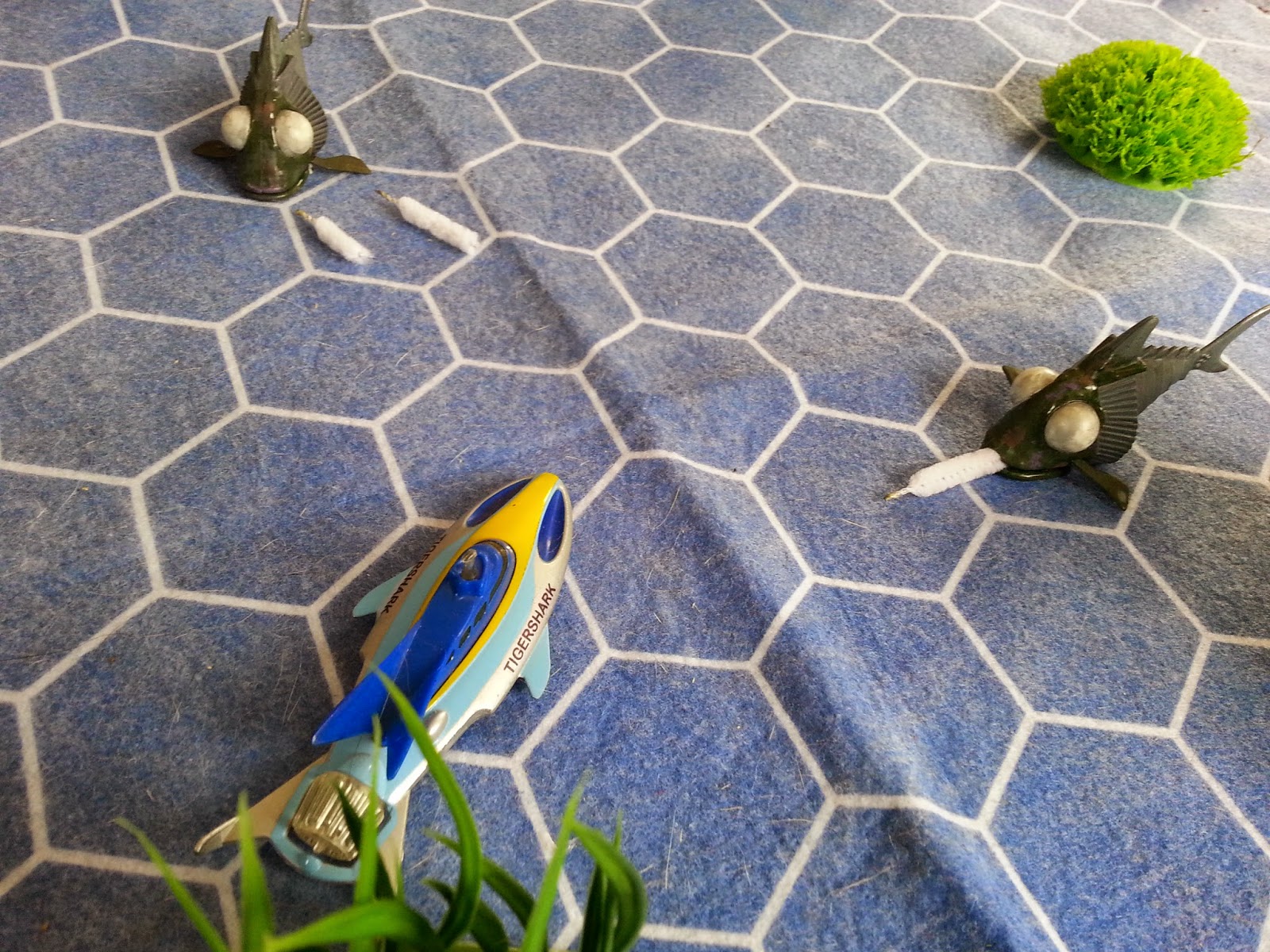 Tigershark's Sting Missiles bear in on a Terror Fish - but missile inbound!


I've knocked up a set of quick play rules and begun to think about terrain, so the pictures show what is very much a work in progress. The rules feature torpedoes and Sting Missiles tearing around the board as well as the subs so I needed  a good way to represent them. I've tried cutting white pipe cleaners into short lengths and burning off the first 5mm or so - the result gives I think a decent impression of a torpedo trailing a wake behind it. still, some time to experiment before the show. 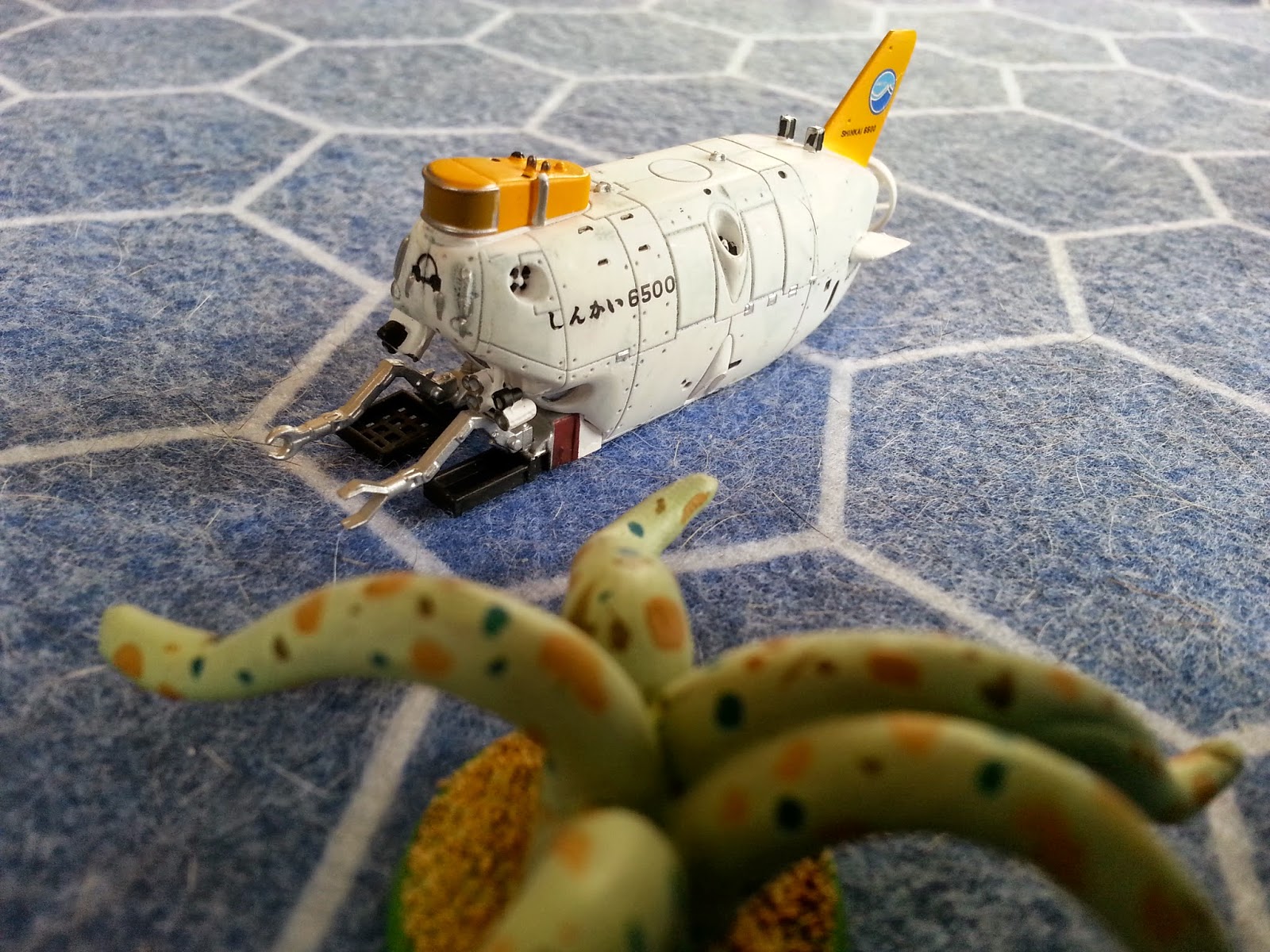 The research sub closes in on "Fingers" the tentacly undersea alien

Anyway the rules seemed to work well for a first try, although the Terror Fish seemed to stand up to incoming fire rather too well (damage rolls tweaked in Mk2) and the various missiles could do with travelling a bit faster. So some mods to make, terrain to spruce up and some bases for the various subs to do and I should be Ok for the next run through in a while.

Long Face Games is happy to announce the release of "River Wars", the first of a short series of supplements for the "Steamer Wars" rules of WW1 gunboat warfare. 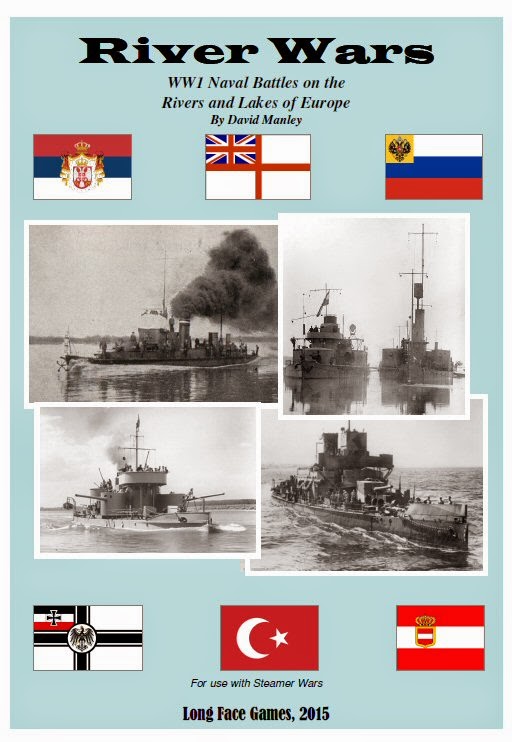 "River Wars" covers naval engagements on the Danube and other European waters. The supplement includes a host of new rules covering mines and torpedoes, troops on shore, land based features and targets and the riverine environment.  Data tables are included for over thirty new ship and vessel types from the navies of the United Kingdom, Germany, Russia, Serbia, Romaniaand Turkey.

River Wars can be had for the princely sum of $2.50 from Wargame Vault

Two further supplements are envisaged, one covering riverine actions in the Russian Civil War, the other expanding the campaign settings in Africa.