Wings of War, Hulls of Wood

Its been half term week here in Brizzle and, whilst looking after the kids I've also had  a chance to catch up with some modelling.

First up, my Wings of War collection. I got a couple of Nexus Dr.1 triplanes from Dom Skelton and they've been repainted in "personal" colours. One is a pink Dr.1 (Liz has a pink 74 gun ship fo the line and we have a pink Curtis P-40 Kitty Hawk, so why not a pink Triplane?), and the second is in the black and silver colours of "Der Schwarzen Hand", my Prussian dogfighting altar ego - prizes for anyone who works out why he goes by that nickname!) 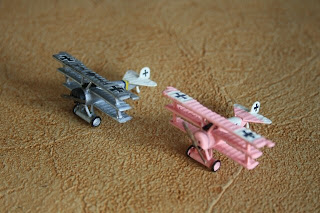 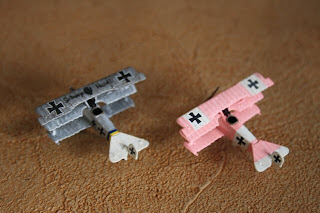 Other repaints were an F Toys Albatros D.III in Richthofen's overall red scheme and a captured Sopwith Camel  painted up as the machine used by Kissenberth. I also finished a Riviresco Junkers D.1, and I was lucky enough to grab the two "secret" models for the F Toys Biplane Collection (Baracca's Spad VII and Goering's Albatros D.III) for peanuts from sellers in the Far East. 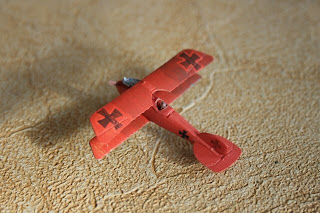 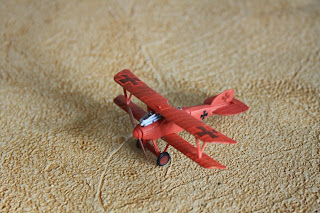 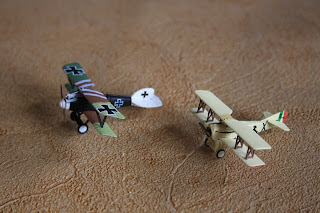 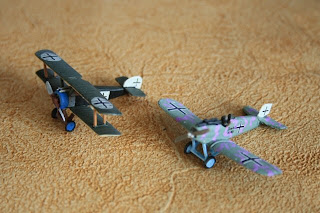 My other focus this week was my 1/600 ACW naval collection. I've had a pile of models from Thoroughbred and Bay Area Yards awaiting some attention for far too long. First up - my favourite ACW ship, USS Mississippi. A favourite for no other reason than my old Navwar model has a suitably downbeat yet hardworking appearance, and hence  alot of character and this, I think, translated well into the BAY model. 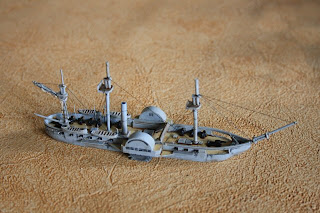 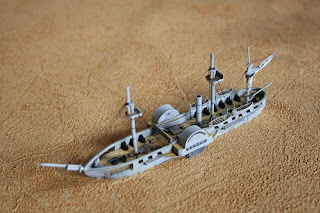 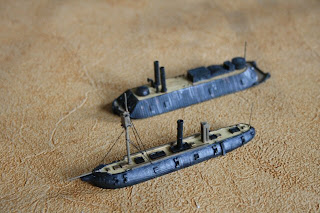 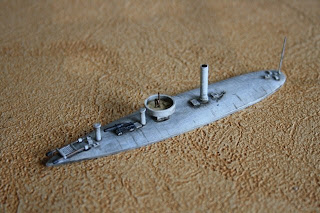 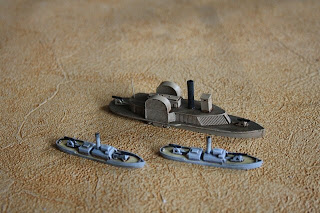 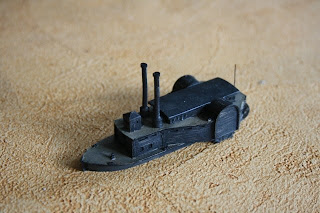 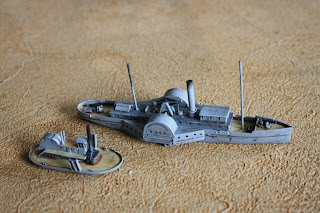 I've made a few of the BAY models now and, whilst the detail generally isn't quite as good as thoroughbred's they still make up into very nice models - plus they have tackled some very interesting subjects and complement the Thoroughbred range very nicely. its worth saying that I was, up until recently, very much a 1/1200 ACW naval gamer, but I've grown rather fond of the larger models. All in all a very busy week!
Posted by David Manley at 10:32 4 comments:

You may recall I set out a plan at the beginning of the year aimed at focussing my scarce wargaming time. We are a few weeks in, so lets see how we are doing:

1) 15mm ECW - The foot troops of my Scots army have been undercoated, but then again they have been for the last 4 weeks. So not much progress there.

2) 28mm Napoleonic skirmish - Nothing happening there

5) the Room - I've made some half-hearted efforts with this, but the place just seems more cluttered than ever!

6) ACW Naval - Some progress here, working on a couple of models from Bay Area Yards.

So, all in all, not a lot of progress towards my "core" objectives. So far most of my time has gone in to the 20mm WW2 project (of which I must post some pics sometime soon) and Wings of War. Perhaps I should have put them in the core plan instead?!!
Posted by David Manley at 09:32 1 comment:

WoW at the Mall

A quick update this morning. The workbench is full of Laura's "Afrika Korps" models at the moment as her SdKfz 251s undergo a repaint (they came ready painted, but in European colours). Also a Rivireso Junkers D.1 and a couple of Hansa Brandenburg W.29s (awaiting decals).

Anyway, last night saw me up in The Mall at Cribbs Causeway. A small wargames group meets there at the Giardino's coffee shop. The games are mostly GW, but there are a handful of Wings of War players. After several abortive attempts I made it up there for a game, or more accurately three.

Hop 1 - I'm in an Albatros D.V, up against a DH4 on a mission to photograph a chateau behind German lines. I initially make an awful start, confusion left with right and hare off in the wrong direction. But I'm soon back on track and intercept after the happy snaps have been taken and the DH4 is on its way home. I take a few hits, but manage to get in his blind spot and fire, at which point the return fire suddenly stops - observer hit! The DH4 is quite manoauvrable, and not fun to be in front of with those twin Vickers, but I'm in the chair for this engagement and hegoes down. Score 1-0

Hop 2 - My turn in a two seater, this time I'm in a Rumpler on a photo recce mission, the enemy in a Sopwith Triplane. We twist and turn as I run in on the objective, and I manage to keep my rear arcs open, scoring a  few hits. Plenty of fire incoming though. The Tripe goes wide as I turn in to the objective and the pictures  are safely in the can. he comes back at me and my next burst causes a fire. He turns violently into me and we bump wings, but no serious damage and then my observer gets a long burst into him as he overshoots. The Tripe goes down! Score 2-0

Hop 3 - We go old school, a Fokker Eindecker vs. a Nieuport. Immelmann vs. Albert Ball. After some careful jockeying for position we end up head to head, both scoring damage as we pass, followed by Immelmanns that could have been choreographed and more mutual hits. Then we both turn away and into a "scissors" manoeuvre. Finally we both turn wide, go head to head again, but waaay to close - collision! But luck is with me. My wheels bump his top wing and crack his main spar. The wing disintegrates and the Nieuport comes apart in the air (my opponent drew the "10" card from the C deck) Final score 3-0!

So, a very satisfactory night. One of the reasons for playing the first two games was on account of the belief that 2 seaters were too powerful in WoW. The lesson from these engagements was for the attacker to exploit the blind spot, a rule that seems to be forgotten by quite a few WoW players.  I must also remember to be more careful when plotting turns to left and right when the model is facing me :)

Then home to see Arsenal beat Barca (I'm not much of a footie fan, but even I was impressed by this and the Spurs win at AC Milan - only an idiot would hea dbutt Joe Jordan!!) And so home to bed, some light reading on the Suakin campaign - must get back to the Sudan sometime - and then to sleep.
Posted by David Manley at 06:35 1 comment:

Some sad news here yesterday, as Tigsie, my lovely old cat of 14 years, passed away. We got Tigsie on Election Day in 1997 along with a ginger tabby girlie cat, so we called them Tony and Cherie. Tony's name didn't stick though and he became Tigger, or Tigsie very quickly. 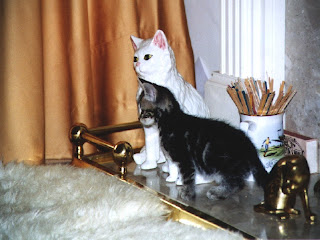 Tigsie as a kitten
He was a soppy old stick. If I'd had a bad day at work or whatever and was having a mope on the bed or the sofa he'd always come and snuggle up to cheer me up. 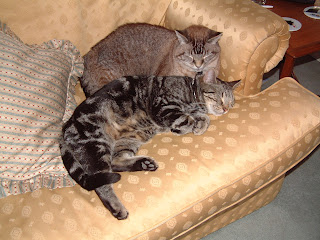 Tigsie asleep with Trubsie (our second cat) many years ago
Unlike the Sudan Kitties he had no desire to eat my Egyptian Lancers, nor (like my first cat, many years ago) a taste for the topmasts and rigging of 1/1200 Napoleonic ships. 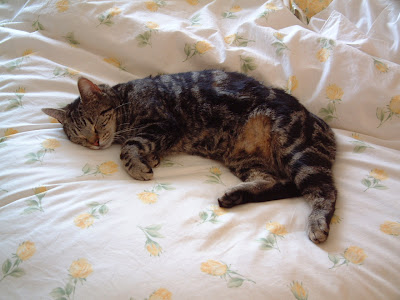 Tigsie asleep (there's a theme here)
We shall all miss him.
Posted by David Manley at 06:54 5 comments: