One of the things I really enjoy about the Berkeley Vale club is a very strong tendency to apply rule sets out of their intended time frame. We have, in the past, enjoyed Alan's adaptation of "Battles for Empire" to ancient Britain, and recently we've tried Bolt Action for near future SF games (and I'm working on a Vietnam adaptation and another for Pony Wars). Last night we tried "Colt Action", Alan's adaptation of the rule mechanisms to western gunfights. 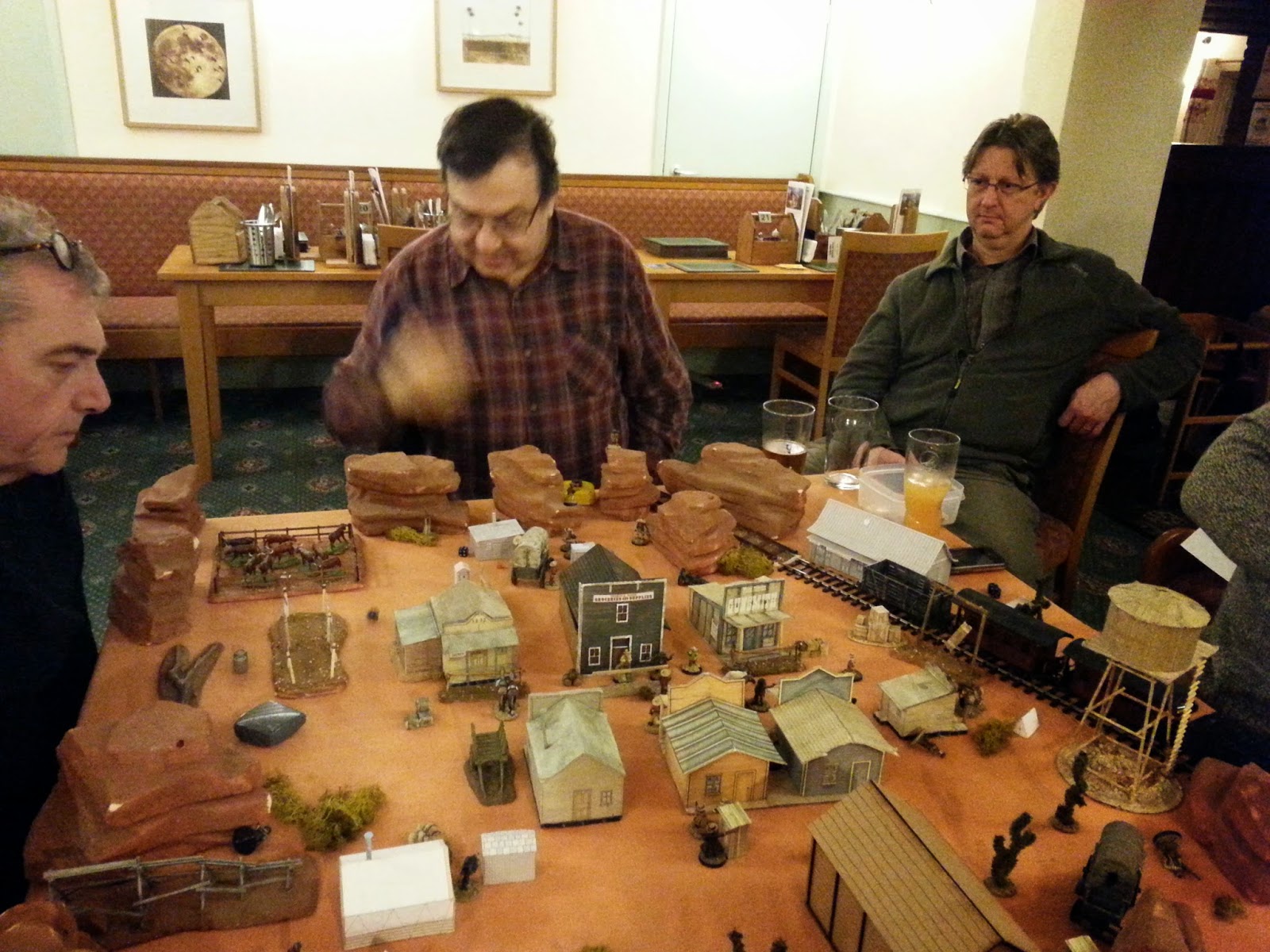 Rather than activating by squads or teams we had one order die per figure. Wounds and injuries were determined using the drawing of damage chits (although in the end I think we decided that a simple die throw might be more effective). The system of activations, pins, etc. was pretty much as for the standard rules. The result was, I think we agreed, well worth the effort and I expect we'll be fine tuning (aka "buggering about with") the system over the next few months.


Here's my gang from last night. 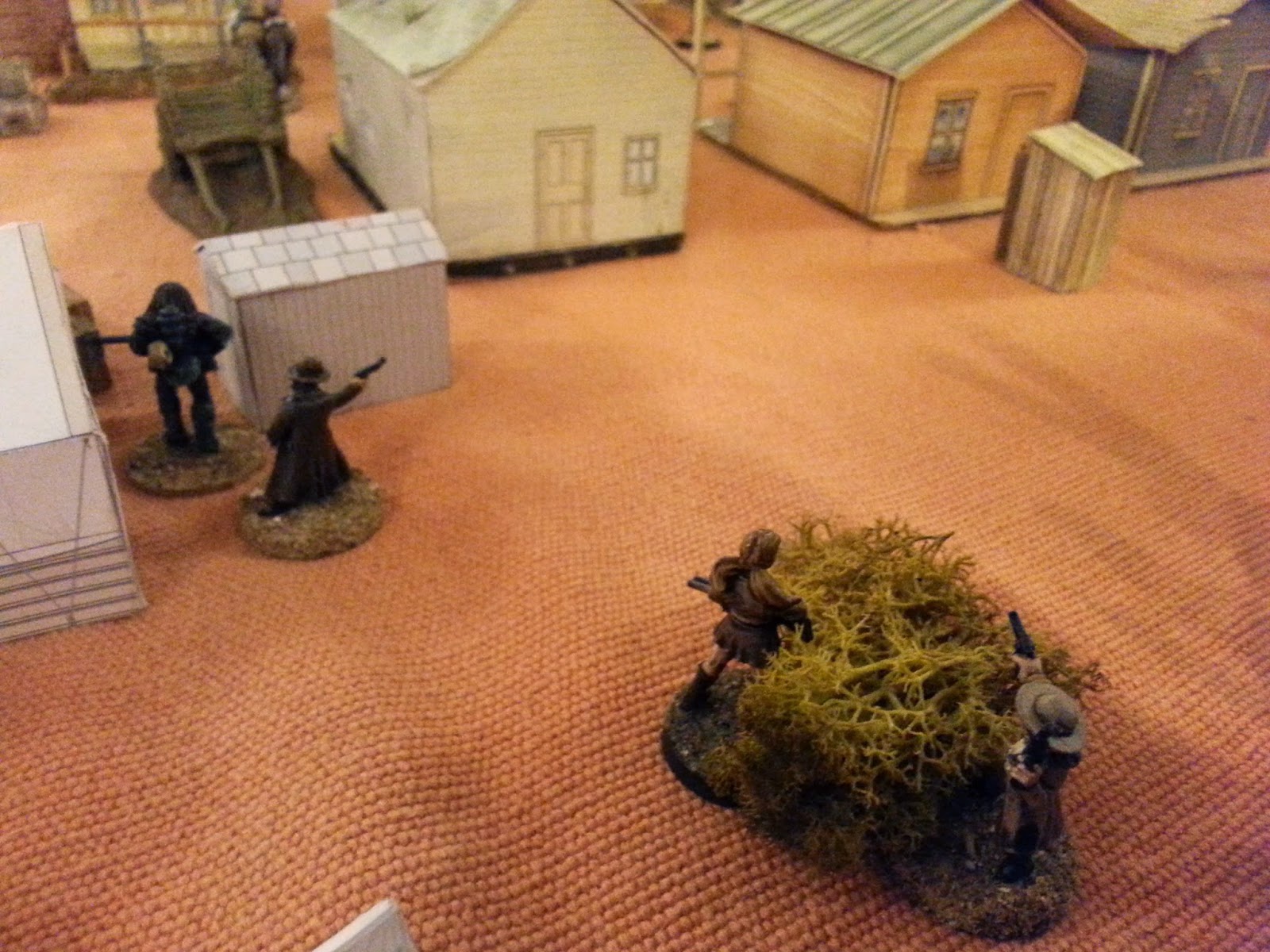 Last night's action saw a horde of gold (possibly fools? who can tell?) in saddle bags carelessly left on a horse in the main street of Whitewash City. Five teams of desperadoes sought to cut out the loot and, as always much hilarity and gunfire ensued (plus an awful lot of fisticuffs, once we realised that the system as it stood made hand to hand fighting far more effective than gunfire - an area for mods in the next iteration). 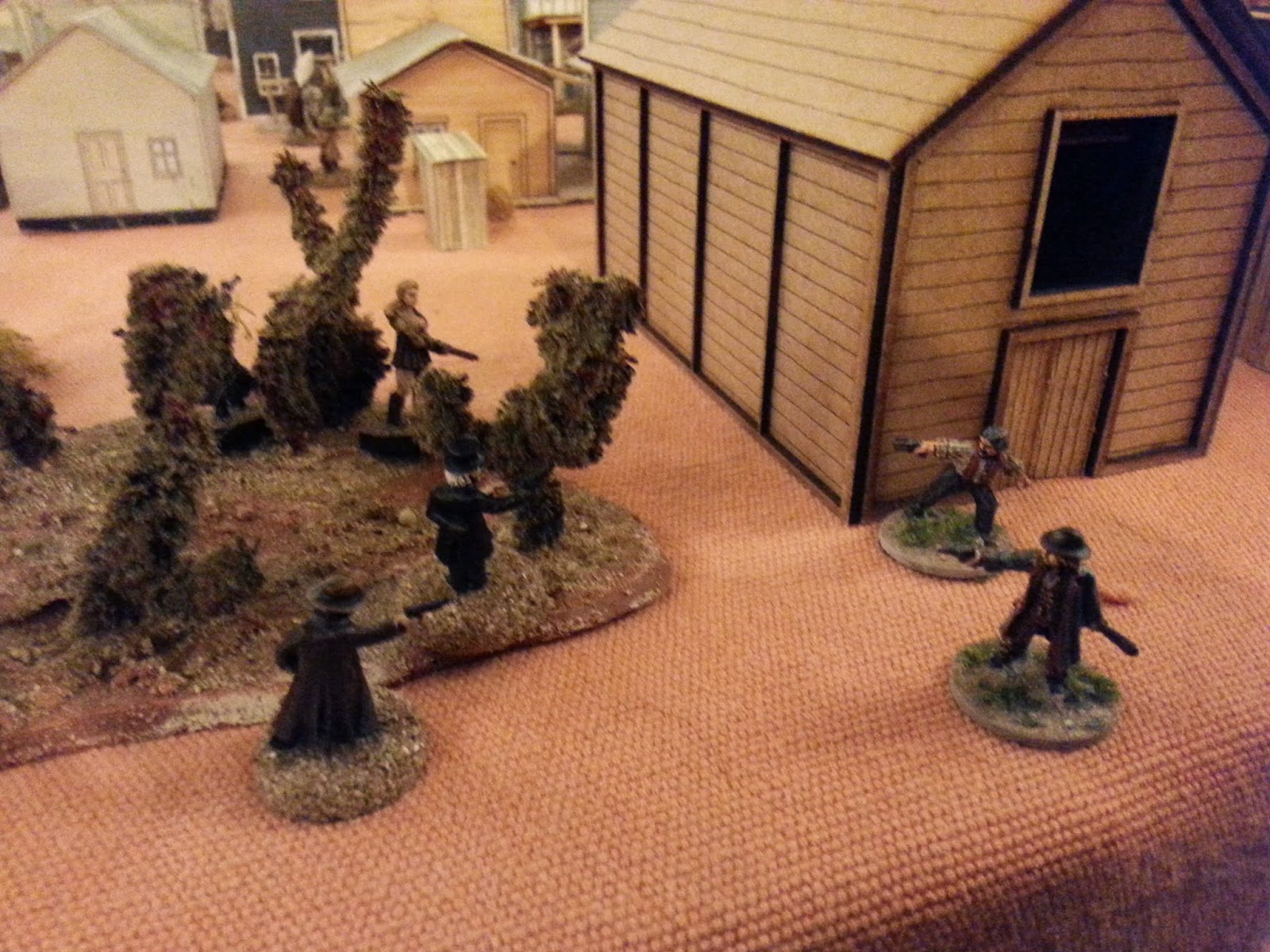 The action, as always, was confused. Rodger and Mike squared off against each other, whilst Alan found himself caught between myself and Shaun. Billy the Kid, one of Shaun's gang, nabbed the horses and made off down the street but earned himself a new nickname of Billy the Bullet Magnet as he was opened up on from all sides, and eventually Billy the Corpse as the inevitable end came. Rodger's gang were next to grab the ponies and they made off along the street away from the station. Unfortunately for Rodger my team of cowboys, deadly ladies and aliens** were in position, having dispatched most of Alan's gang. Rumours abounded that Rodger, Alan and Shaun were planning to team up, so Mike and I decided to split the gold - Rodger's horse thieves were dispatched, Alan's last survivor booked his ticket to Boot Hill and Shaun's survivors decided there were easier pickings elsewhere and made a discrete exit. 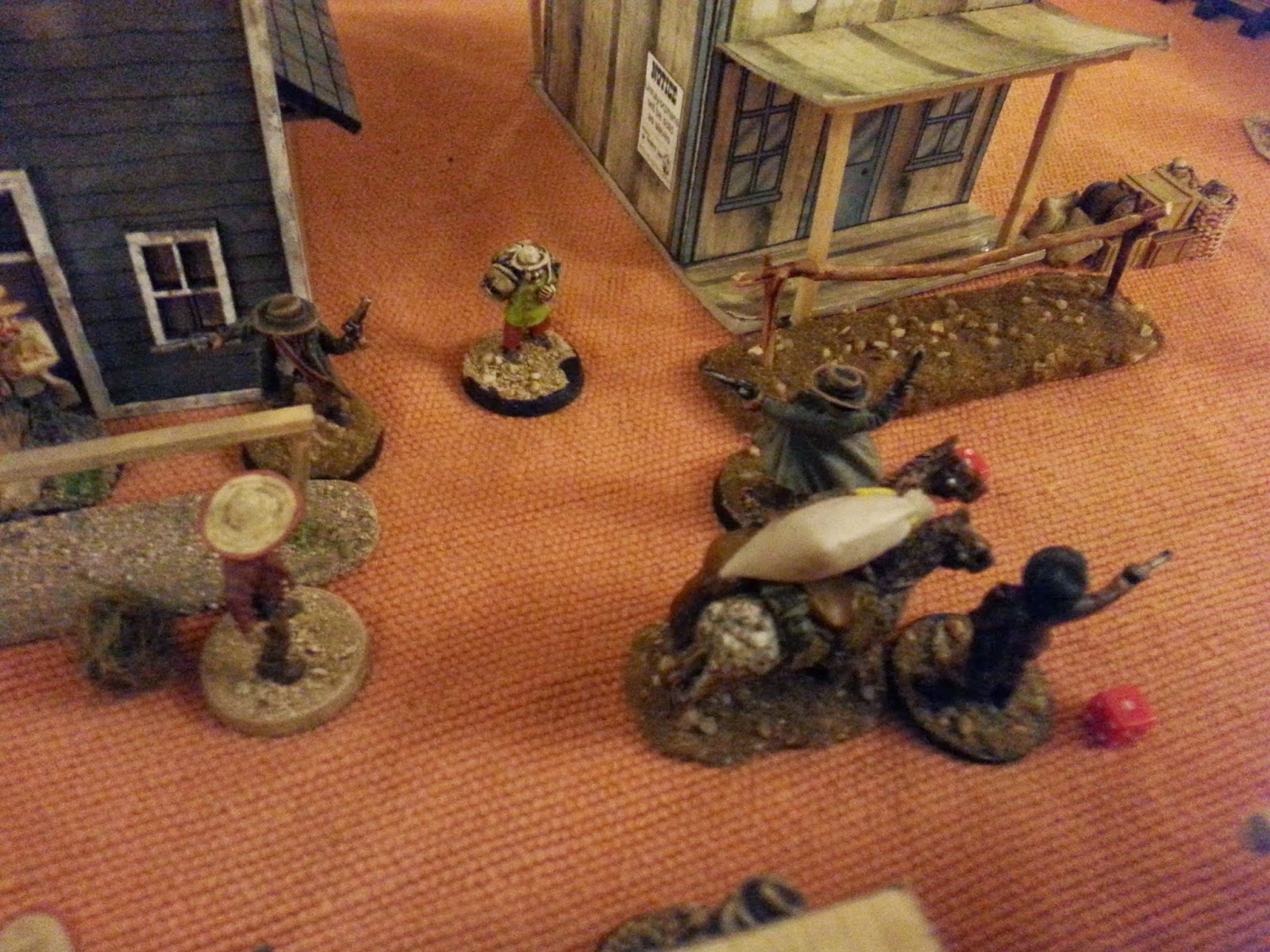 As usual, loads of fun and plenty of ideas for modifications for the next game! 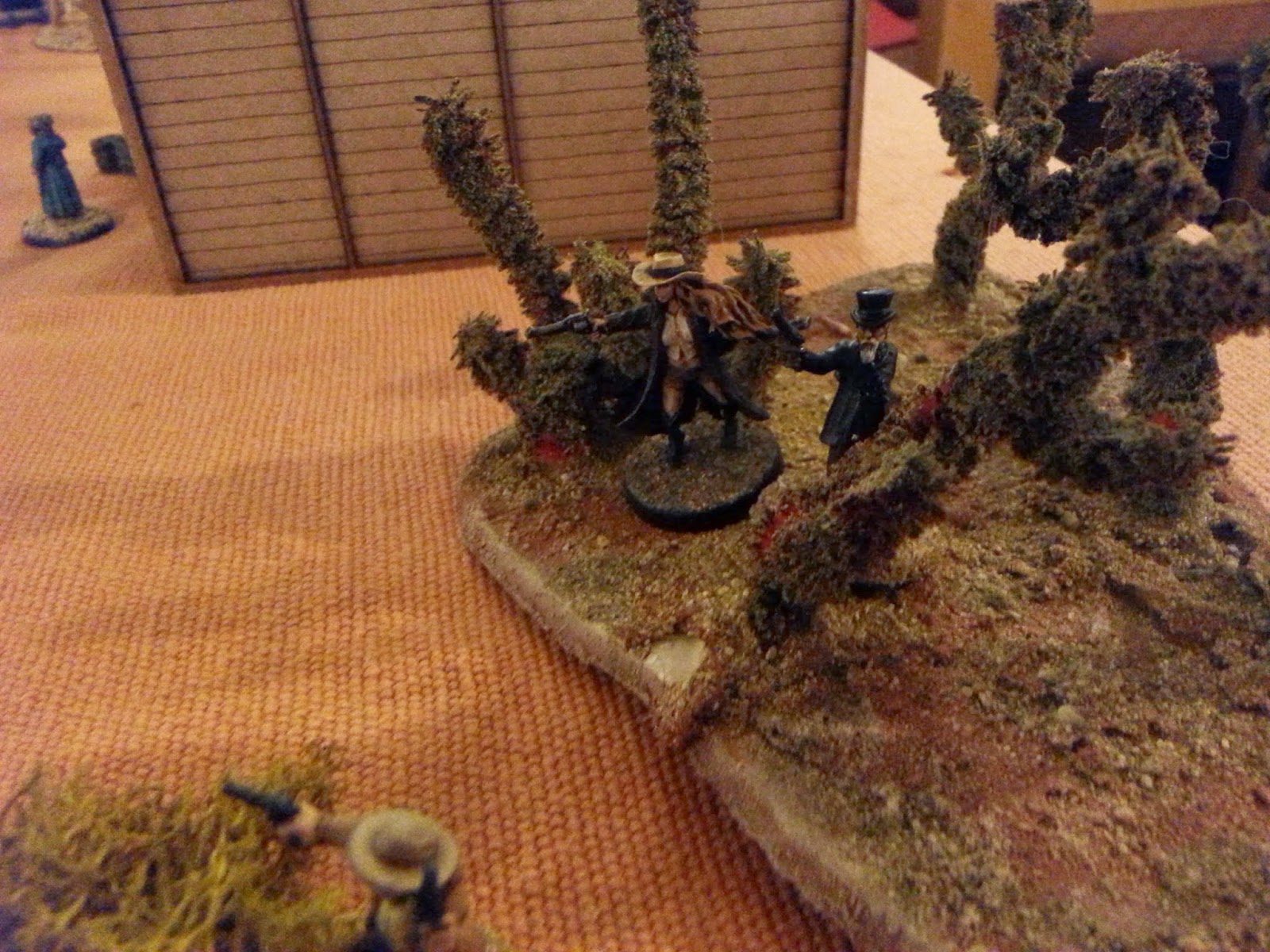 ** each gang was supposed to have three gunfighters with pistols, two rifle armed cowboys and another with a shotgun. I was short of one rifleman so "Al the Alien" (actually a Predator) was subbed into the fight. Alas without his usual array of advanced weaponry!
Posted by David Manley at 08:53 1 comment: