This is my first blog entry for a while, so you could be excused for thinking that I've not been up to much. In fact the last few months have been quite busy (and you'll find a brief summary at the end of this entry).

The reason for this entry is to post an update on a project that has been on my books for two decades, and that is a set of fast play fleet action age of sail rules. I've had a number of false starts on this but over the past 6 months this project has accelerated a bit and it looks like it is coming to fruition. The rules now sit within my set of fast play rules, between the Renaissance and the age of the ironclads, and players of my other sets such as "Broadside and Ram", and "Cannon, Cross & Crescent", will be familiar with the mechanics (although they differ in a number of details). The rules have been the subject of some gritty playtesting by a number of groups, not least of which is Bob Blanchett and his antipodean team who have done a grand job highlighting areas for improvement.

My latest play test here was last Monday, wherein my friends in the Berkeley Vale wargames club took to the high seas off the Netherlands to refight the Battle of Camperdown/Kamperduin - Monday was Trafalgar day but I wanted something a bit smaller for this game as it was the first time the BV team had seen them.

As in the real battle the aim was simple - Dutch need to escape to the West, the Royal Navy needs to stop them. And thats sort of how it turned out, although the RN wasn't as successful as in real life. The Dutch vanguard and middle squadron managed to extricate themselves quite nicely, and gave the British vanguard a  bit of a hard time. The British rear managed to get itself out of position and ended up trading shots at long range, but the centre squadron hit the Dutch line between the Dutch centre and rear, isolating the rear squadron which was hammered at close range. As the game ended (and last orders called) the Dutch rear was lost, but they had managed to get their other squadrons into a position from which they could escape, albeit with some damage sustained. 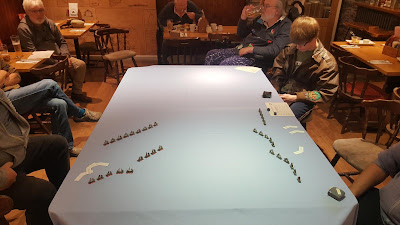 Start of the game. The Dutch (right) decide to close the distance to the British fleet 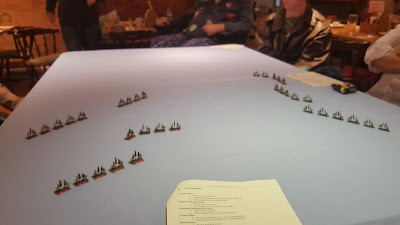 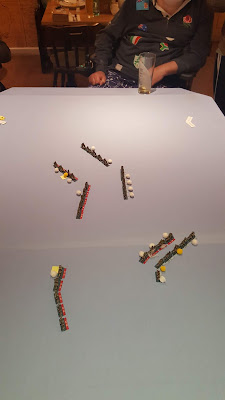 Battle is joined. The white and yellow puffs are markers representing damage suffered. 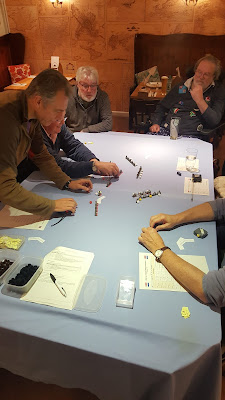 A fun action, and the BV players picked up the essence of the rules very quickly. The important thing though from my perspective was that they enjoyed it and want to play again. Perhaps we will get Trafalgar done this year after all? :)

Just for info, the models are 1/2400 scale ships from the Hallmark range. I first got these to do Trafalgar around 1995, and Andrew Finch of A&AGE painted up my first batch (plus the Danes at anchor which I bought to do Copenhagen). The last batch of models, which I bought soon after the first, I finally completed earlier this year :)

** So what else have I been up to? Well, in no particular order: