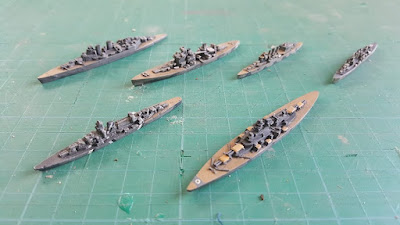 This was a fun game to play out, taking about an hour to complete (so not that much different from the time of the "actual" game, which was pleasing). I included the two British cruisers in the game but they were never in a position to affect the outcome. I included a rule that caused PoW to suffer a gunnery failure if a d6 roll of 5+ occurred at the start of the gunnery phase; the effect of this was to  cause PoW to check fire until the failure was completed (a d6 roll of 4+ at the start of each subsequent gunnery phase). This was a bit more severe than the actual effects of her failures in the battle, but served to speed up play and gave a good feel to the game.
Posted by David Manley at 11:01 4 comments:

Readers will have seen my earlier post regarding the battle of Denmark Strait, Briefly, the plan is for players around the world to refight the action on or around the anniversary using their favourite rule sets and to post AARs, letting us compare the results and to promote naval wargaming.

I've put together the standard scenario in a graphic below, and I'm planning at least 2 games, one using "Find, Fix and Strike", the other with GQ2. If I have time I might break out the 1/1200 collection as well and use the old Skytrex WW2 rules. 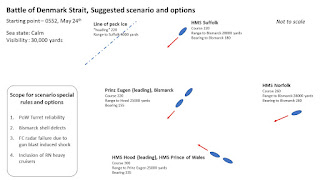 Around about 25 years ago I kicked off my Cod War project with a set of rules for an NWS participation game at the naval museum in Portsmouth. In 2006 I wrote a variant set covering the "whale wars", as Greenpeace and (more latterly) Sea Shepherd's attempts to frustrate Japanese whaling fleets hit the news. This was a fun, if somewhat controversial set but it was fun to play and I even had a marine biologist in New Zealand send me some feedback on how to make the whales (controlled by the game process) more realistic. I think they played it at the university in Auckland.

The big problem was models. Nobody made wargaming models of the ships involved. There were one or two 1/1250 collectors' models but they were hellishly expensive and of such fine construction that they would never stand up to the rigours of the wargames table. The release of Decapod's "Cod War" range on Shapeways gave me hope that perhaps some Whale Wars models would follow but alas not. Cardboard counters for ships and whales would have to suffice, as they had for many years. And so this part of the project languished.

With a half decent 3D printer on hand the way was open if models were available. Whales - not a problem, loads of them out there. Some of he more unusual Sea Shepherd craft were available as well, notably the Ady Gill and the Brigitte Bardot. Further hunting around revealed a 3D graphics model of a Japanese whaler available for a very reasonable price. Downloaded, the model was converted into a format that I could work with by a good friend and was set up for printing. I wanted at least one of the larger Sea Shepherd ships and I found that Decapod had posted his "St Giles" trawler on Thingiverse (an online repository for free 3D models). Not white the right ship for what I had planned but I used it as a training opportunity in basic 3D modelling, cutting out the middle quarter of the ship and reattaching the bow, adding a flight deck and adding boats and davits to the working deck to make a rough approximation of the Steve Irwin.

So now off to the printer and after a few days (I was burning off Jem Hadar fighters and German R Boats in 1/600 and 1/300 at the same time) I had a decent collection of whalers, protester craft and whales, and the project is back on. The models aren't to a consistent scale - the whalers and the Steve Irwin are roughly 1/850, the smaller craft printed to a slightly larger scale to give them more presence, and the whales similarly larger. I'm quite leased with the results and I'm fairly certain that what I have just now is a pretty unique little set.

I need to make a few additional bits and pieces, some icebergs and one or two helicopters, but the main bulk of the collection is done. 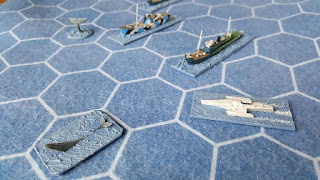 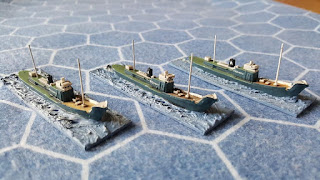 A trio of Japanese whalers 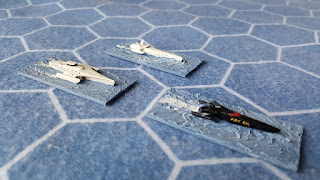 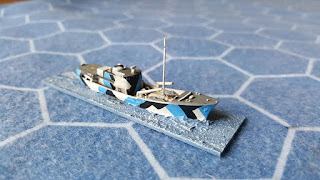 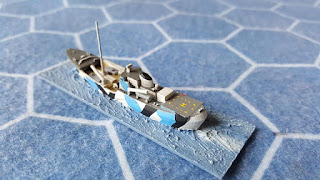 Another view of the Steve Irwin 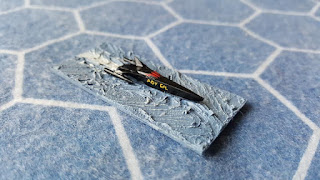 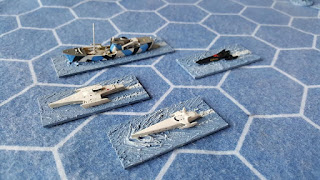 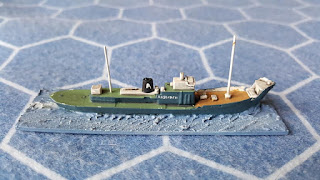 Another view of one of the Japanese trawlers