Back in the Saddle

I'm back online after a couple of weeks away. One week in Scotland having fun with stuff that goes bang, then a week in Taranto with colleagues from around the world. An interesting week, with lots of people trying hard not to mention the raid in 1940 (some with less success than others), and punctuated by the occasional sight of Typhoons heading South from Gioia Del Colle on their way to Libya. We did get a tour of the new Italian carrier Cavour - a fine ship - and I had some dead time during the evenings and early mornings and I managed to get some work done helping Martin Goddard out with material for the revised edition of "Hammerin' Iron". Our hotel was right on the waterfront overlooking the Mare Picolo and alongside the Canal to the outer harbour, so we got to see some interesting stuff passing from the inner part of the base to the outer regions 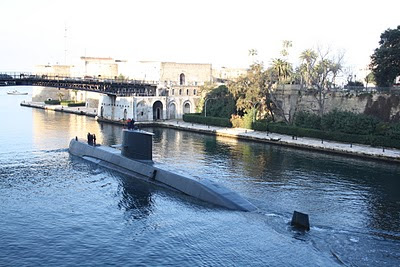 I also came to appreciate Italian crepes and gellato - handily enough both could be had from a cafe just behind where this photo was taken. Subs, ice cream and delicious savoury goodness all within arm's reach :)

Still, I'm back now.The first sight I was treated to as I entered my wargames room was the aftermath of a "battle" fought between my daughter and one of her friends on my wargames table. an interesting fusion of 15mm Sudan, fantasy orcs, SF robots and mechs, and 20mm WW2. Fortunately not too much damage done, but I'm still sorting out that potmess! On the modelling front one of my US chums kindly brought some stuff over for me so, as well as having the WoW Revised deluxe set to play with I'm also now repainting a Breguet Br.14 as a machine captured by the Germans, and working on some 1/600 ironclads from Bay Area Yards (more on these over the next few days, but suffice to say I'm a BIG fan of Bay Area!). I was also very pleased to receive a "Fort Sahara" model gratis from Dave Crook, something that he came across at a car boot sale. Its been well loved, but all the important bits are fine and it will be an ideal renovation project for the next couple of weeks. Although intended as part of the "nondescript" element of my 15mm Sudan project (things that don't quite fit with a pure Sudan setting but are more suited to a "freeform" Middle Eastern setting anytime between 1880 and 1920 - hence my Rolls Royce armoured cars and the lovely tank from Indiana Jones), it may also act as the spur I (don't) need to kick start my 15mm French Foreign Legion project. Although hopefully I can stall that one for a year or two!
Posted by David Manley at 05:28