Today's completed items are some more bits and pieces for my 15mm SCW / "imagi-nation" collection. This time we have a maritime component, the police make an entry, and we've been working on the railroad :)

First up - the submarine. many years ago the kids were given a bath toy submarine. s luck would have it, the toy looked like it would make an ideal 15mm surfaced submarine when its lower hull was removed. and several years later, it came to pass. The toy was about to be thrown out and I salvaged it. It still took 2 years to get around to making the model though :) 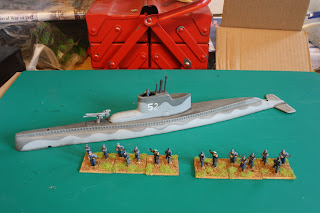 The deck gun was made from an old Airfix 6pdr anti tank gun, trimmed and mounted upside down to mimic a 1920s 12pdr / 3" naval gun. Now that I've finished the model I'm thinking it may have been better to remove part of the "foot" in front of the conning tower and fin to make more room for the gun, but I think the result is reasonable (and now that its done I don't feel much like changing it). 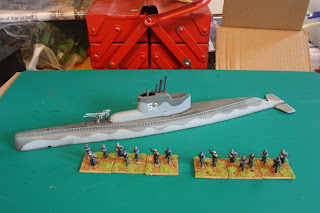 Accompanying the boat is a small naval landing party, made up of Peter Pig U-Boat crew. This is a nice little set with riflemen, POs with SMGs and a couple of officers. I might see about adding an LMG team and a rubber boat or two to this group next year, but for now I think they'll do. 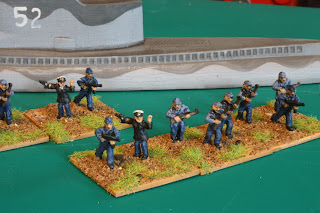 The railway subject of the next shot will be familiar to a few readers. Having seen the Siku railway locomotive and wagons on "Jims Wargames Workbench" I decided to get some for myself. its more suited to my AK-47 collection, but could just pass for a 1930s diesel. Rather than repainting I decided to give the loco and wagons a black wash, varnish and then heavy weathering. They came up OK, and fit nicely on the 15mm track I got for use with my Sudan armoured train. Alongside the train you can see the Policia figures (more on these later) 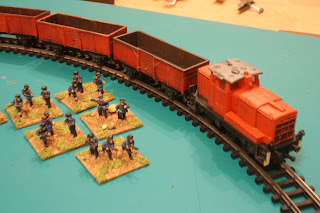 Whilst searching for the railway loco on eBay i noticed that Siku also make a steam locomotive and coaches. This has a very nice, dumpy "European" look about it, and so it fits nicely into my 1930s setting (it may not be authentic for Spain, but close enough!) 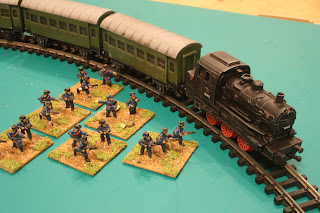 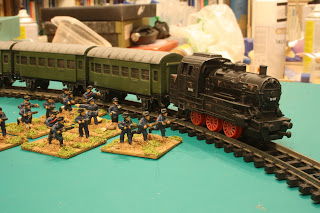 And so finally the Policia. I over-ordered on Civil Guard from Peter Pig and, having finished the CG unit I wanted to use them for something else. So they have become a small unit of local police (augmented with a couple of officer figures form the PP WW1 range). Seem here with their ultra modern transport (courtesy of Minifigs) and a BT-42 skulking in the background. 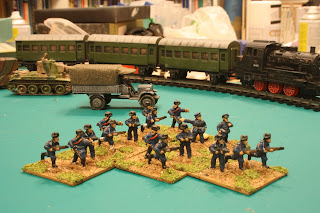 Looking through my box of stuff to do, the SCW pile is down to some refugees, casualty figures and some 1930s biplanes. So it should be a fairly quick job to get these all squared away early next year.
Posted by David Manley at 19:58