A Time of Aces

Yesterday I played in the “Time of Aces” Wings of War tournament at Firestorm Games in Cardiff.  In all, 24 players from Wales and South West took part. The tournament rules allowed a free choice of any aircraft for which there was an official WoW card, and for which the player had a miniature (either official WoW models or from another manufacturer). I decided, for sentimental reasons, to go for a Roland – perhaps a bad choice when I arrived to find the majority of the aircraft there were Camels, Snipes and D.VIIs. But no matter, the aim of the game was fun rather than extreme competitiveness, and the Roland is a fun plane :)

The set up was as follows. Players were divided into two teams, one Allied, one Central Powers. Five missions would be played out over the day.
Mission 1 – a simple dogfight. I draw a Breguet Br.14. All going well and I’m hitting him as well as he’s hitting me (the good arcs of fire for the rear gunner are a boon for the Roland)  until I draw a “bang” card, and my poor two-seater instantly flies apart.
Mission 2 – Pairs. I’m flying with a Dr1 against a Camel and a Brisfit. My first burst at the Camel has him draw the “bang” and its 2 on 1. Unfortunately the Brisfit shoots my wingman to bits, but I come back at him and soon he’s down in flames. Roland kills Camel and Brisfit – shock result!! Mission 3 – photo recce. The mission aims are to photograph three objectives. I’m high, as is the other Central Powers photo plane. Everyone else is low. I take my snaps and bug out, my oppo has real problems meeting what we thought were the criteria to take pictures (as it turned out we were misled and he actually snapped the targets properly many times more than he needed to!). As a result he hangs around too long and a high-climbing Camel gets in his 6 o’clock and shoots him down just short of the table exit. 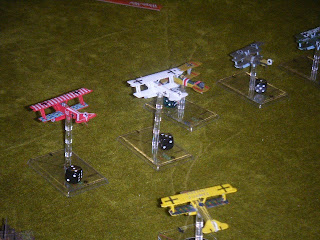 Mission 4 – Bomber escort. I’m assigned as a gunner in the bomber. Killed by a head-on burst from a Camel, so my participation in that one is short. 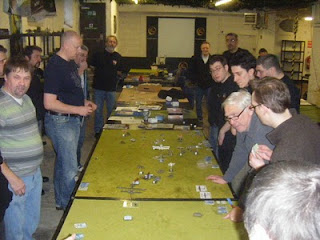 Mission 5 – 4 on 4. This one turned into 4 on 1 very quickly as all my compatriots were shot down in double quick time. I go head to head with a Snipe and plan to pull right has we pass and expose him to some rear-gunner happiness. Unfortunately he causes critical damage (two “5” cards) and kills my rear gunner in that pass. Nothing for it, with the Snipe turning lazily behind me I dive for the table edge and make off.
All in all it was a fun day. Although the Central Powers lost it was a good series of battles played against some very experienced players, and all done in a fantastically light hearted atmosphere. And if nothing else I now know the photo recce rules inside out!!
Posted by David Manley at 14:08