As the last few hours of the Christmas holidays tick by I've been finishing off a few old projects. Laura now has two brand spanking new Pz IIIs to chase Philip's Crusaders across the 20mm western desert, but the big news is that my HP 0/100 is, at long last, finished! 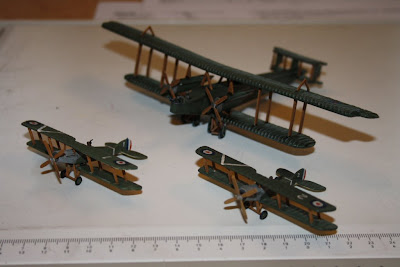 Here is the "Bloody Paralyser" sitting in front of a couple of Skytrex Brisfits (which i've also finished sprucing up). The HP was surprisingly easy to put together, probably aided by its size. There was no need to replace struts with brass wire as in some other 1/144 kits. Painting was a bit of a chore, especially when i decided to change schemes half way through. Unlike other Skytrex 1/144 kits this one doesn't include  adecal sheet, so you either have to scrounge some from somewhere else or paint your own markings. Alas I had no spare roundels that would suit, so I decided to model the aircraft as one of those from 207 Sqn, RNAS (appropriate, given my naval shennanigans). The benefit of this scheme is that it uses small "low visibility" roundels and tail flashes, so no need to worry about the white bits!.

Whilst I'm in a 1/144 mood i thought I'd add couple more photos of my various Skytrex home-buuilds. First off the AEG G.IV. A lovely aircraft, but dwarfed by the HP. 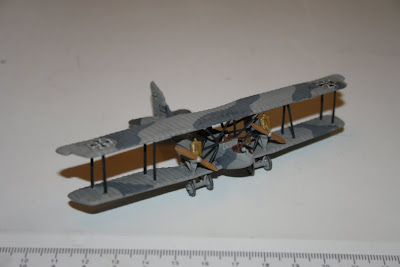 And finally an observation balloon. This was a pig to put together, expecially trying to sort out the cables from which the basket is suspended, but I tink the effort was worth it. 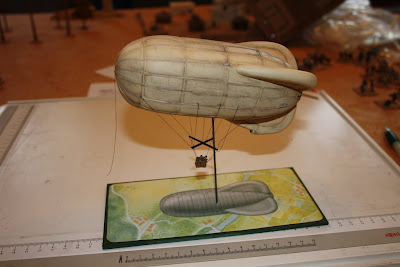 The base is a scanned copy of one of the "Wings of War" balloon counters, since it is more than likely that its first outing as a target will be in a WoW game sometime soon. That said, I'm hoping to be using it in Air War:1918 games soon as well :)
And so the holidays come to a close, and my normal glacial rate of painting and gaming is set to return.
Posted by David Manley at 16:13