A New One Just Begun!

A happy new year to all our regular correspondents and new readers!

After watching the Western side of Bristol lit up in a myriad of new year fireworks displays the family retired to bed, thence to rise and mount the annual expedition to Brean Down to blow the cobwebs of the old year away, and to pay our respects to one of Mr Palmerston's follys. This time one of Laura's friends and his dad came along and, with a heightened sense of adventure, we clambered out to the searchlight position at the very tip of the headland. Now, as the kids begin to wind down for bed, thoughts in the "man cave" have turned to the International Solo Wargames Day and the battle of Sennar which will be refought, solo style, this evening.

In advance of the battle (and the write-up which I expect will hit the streets tomorrow), the forces of the Mahdi and Hicks Pasha have been on parade. I thought some of the assembed readers here might like to see some of the units new to this blog. 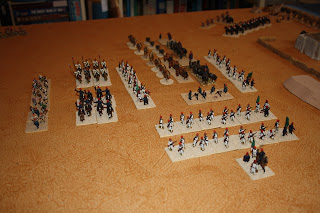 Here we see the Egyptian force of Hicks Pasha - four regular battalions, a regiment of cavalry and another of lancers, and an artillery battery, all from Essex. To the left is a battalion of Bashi Basouks from Peter Pig (unfortunately on foot, Mr Pig has not seen fit to provide us with mounted versions of these irregular cavalry!). to the rear is the baggage train (handily unbiquitous, so expect to see this in use by all the major protagonists!). 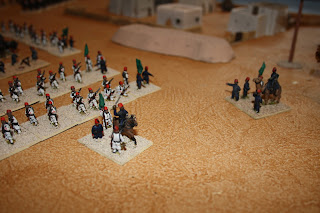 Hicks Pasha takes the salute from the 1st and 2nd battalions as they march past. 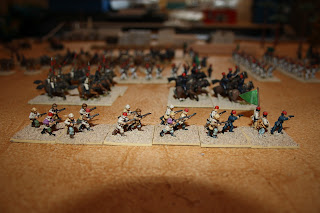 Peter Pig's Bashi Basouk figures are rather lovely and full of character, but would (IMHO) benefit greatly from a command pack of their own, and mounted equivalents. 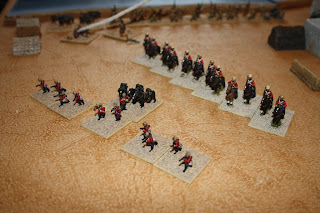 Moving over to the mahdist forces, here is the assembled army for the Sennar battle: 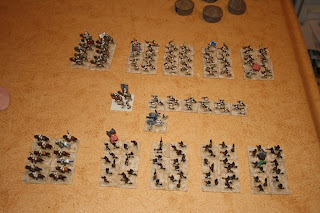 Here we have four units of Ansar, four of Hadendowah, one of Jehadiya riflemen (in the centre), with Baggarah cavalry and camelry scouts to the front. In the middle, leading the Jehadiya is the Mahdi himself,  although the command stand is sufficiently generic to serve as pretty much any of the Mahdi's lieutenants.

Finally, proof that Hicks Pasha has more to fear than just the Mahdi and the desert - as Kitten Kong (or his Sudanese cousin) makes an appearance! Fortunately Mitch's visit to the wargames table caused nothing more than a few toppled palm trees! 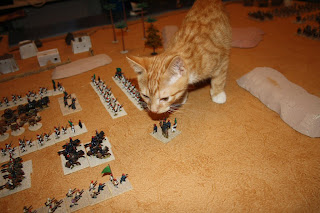 So, the table is set, the forces are ready, and tonight the forces of the mahdi and Hicks Pasha meet once again!
Posted by David Manley at 20:16