Having reviewed progress in 2013 yesterday, today I set out my plan for 2014. As a cursory look at the last 2 years will show I achieve between 50% and 75% of my objectives so I am confident I will be reporting a similar ration of success and “deferred success” in 364 days time J

1 – 15mm Colonial. Sort out those blasted Bashi Basouks and some river boats. Then look to see what we need extra (if anything) for the hinted-at Berkeley Vale campaign.

2 – Form Line of Battle. A surprise entry, but here because (a) I’ve remembered how much I love the rules and (b) Rodger at the club wants to give them a try. The plan here is to renovate the fleets and complete at least six ships from the “lead pile”

3 – Project X. Mysteriously referred to over the last 2 years, PX has three elements to it. I will complete at least 2 of them this year. You’ll know when I do J

5 – Armada Invencible. Another surprise entry, but 2014 should see the rules for this hit the streets. I have a couple of the ships already and it looks like my stock of old Airfix galleons might work with them at a pinch. The objective here is to get a copy, knock up small English and Spanish squadrons and try them out. And if they don’t work then an Armada variant of FLoB may be on the cards J

6 – Games. I’m well set up to run a number of games, including Wings of Glory, X Wing, Sails of Glory (of which more in the coming days I hope), War Rocket and a few others so the plan here is to get a number of games of each in. I’ll also try to run a one day campaign, maybe two. These may or may not be connected with Project X.

Inevitably there will be some mission creep. I can guess where the mission may creep to over the coming months (those 15mm Vikings would like a day out, as would my 7th cavalry and Plains Wars Indians, and then there’s the “not the Spanish Civil War” stuff…..). So expect some variation.

However, one very firm target – NO NEW PERIODS! 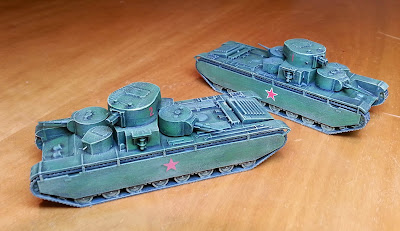