We've played Sails of Glory a few times at the Slimbridge club and also at the Mall at Cribbs Causeway. these games have generally included more of the advanced rules rather than just the basic rules with a few add-ons that we used for demo and parti games at shows. These more advanced games have thrown up a few thoughts and comments, offered below in no particular order. 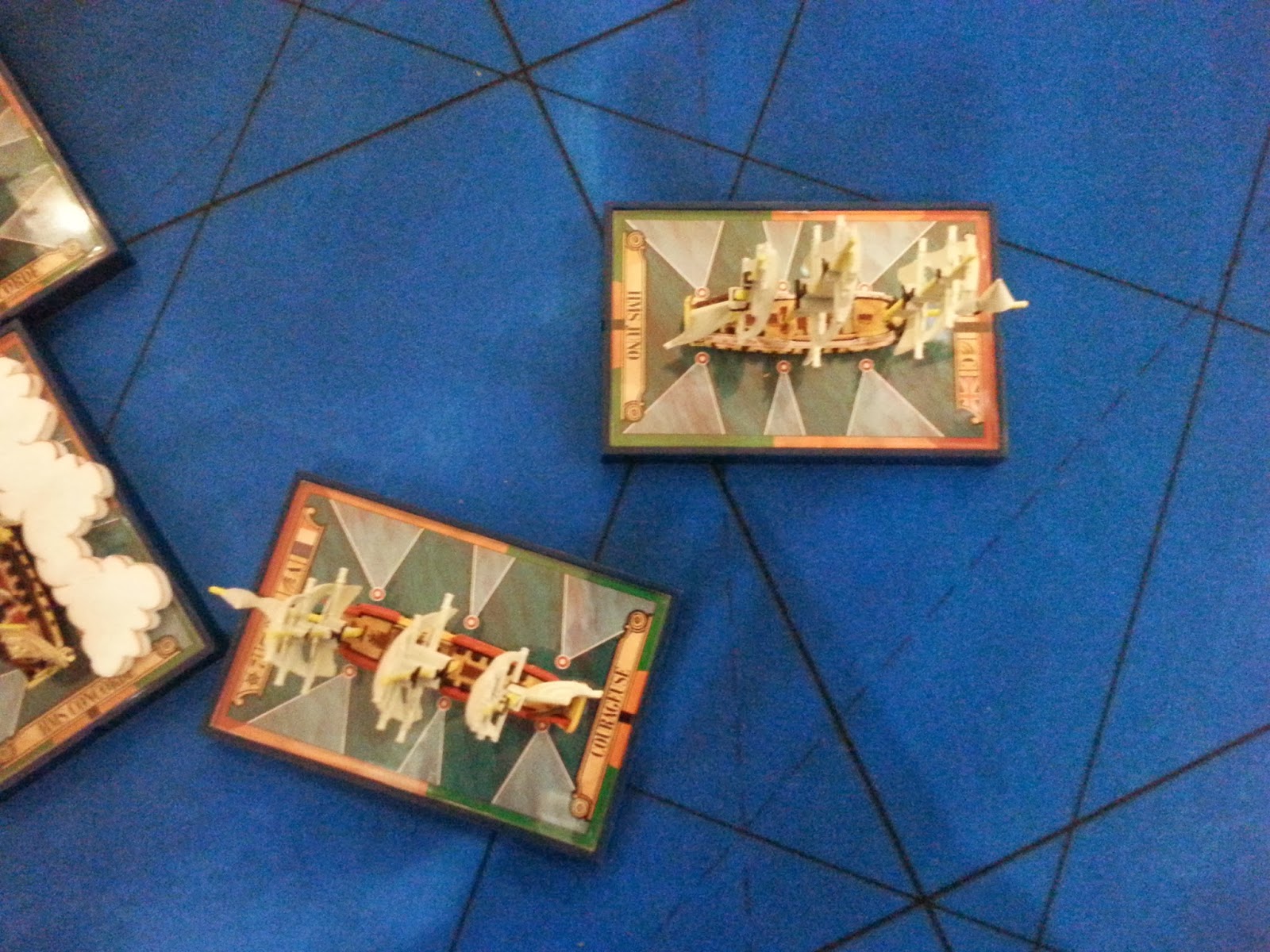 1) Its bloody fiddly! Counters all over the place, drawing chits for everything. It works well but you can't help thinking that in many cases it would be simpler just to have thrown a d6 or something

2) The stats go wonky due to the chit drawing. There are a few events where damage chits are drawn to determine choices of action. Obvious really but the probability of an event shifts with the drawing of chits.

3) The broadside and sailing arcs are really, really wide. Ships can sail far closer to the wind than they ought to, and targets can be engaged well forward or aft of what should be achievable

4) Muskets are deadly. Forget cannon, designers should have provided larger fighting tops and stacked them with gunners. We've had several ships wiped out due to musket fire. It seems brutal

5) Almost as brutal as colliding with a friendly ship - getting bumped by a friend can seriously damage your ship. Conversely you can hit and bounce off an enemy ship with impunity.

10) The two card selection for movement in anything other than the basic game just feels wrong, especially compared with the speed of some actions (e.g. damage control) and the scale of the game.

11) Oh, fires and floods are brutal too!

12) And leaving aside fires, floods and muskets the rate of damage inflicted in the game is very, very high. 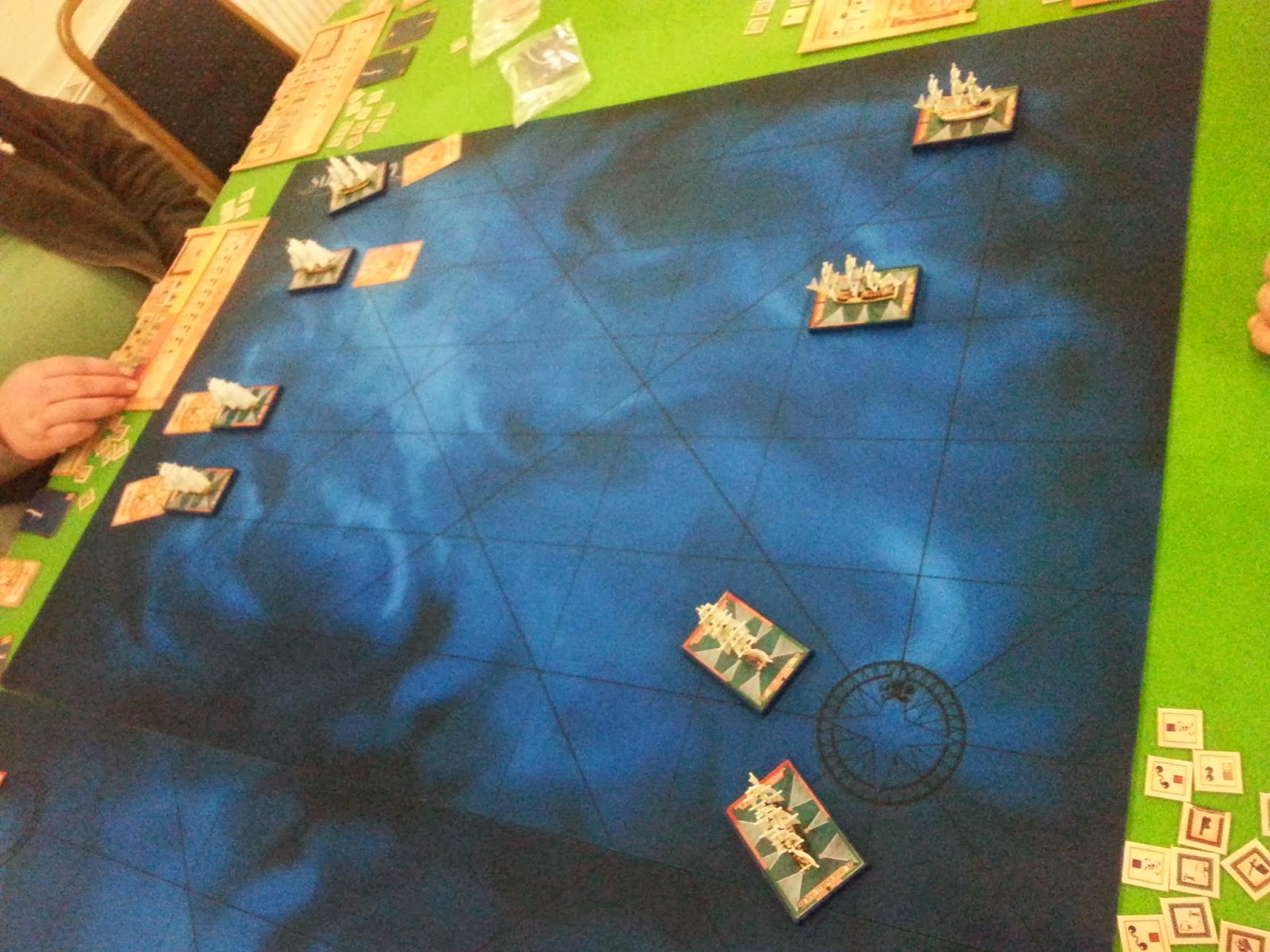 Now, you might think DM has gone all hyper-critical here. I suppose what we've identified are those "gamey" aspects that are there in order to give a fun game, fighting four to six ships to a conclusion in an hour or so. And it does that very well indeed. And, I suspect, the majority of players will be entirely happy with that. I also suspect that the game will get a drubbing from more dyed-in-the-wool AoS players. For me I'm happy to enjoy it as a game primarily with a fair brushing of "realism", but very firmly over on the "game" side of the "game vs simulation" argument. I suspect my preferred mode of play will be a combination of basic, standard and advanced rules, some rules modified (I'm thinking of replacing the collision and fire/flood rules already) and a few completely new house rules, and I'll probably post on this at a later date.

It should not need pointing out that, despite my misgivings on a few things I do enjoy the game and there are some really lovely things about it, not least the models (which have, at last, made AoS gaming accessible to those wargamers without the time or skills to make sailing warship models, or the expansive bank accounts that allow them to pay a painting service to do it for them), the play mats and many aspects of the rules; the crew management system as a system works really well. Overall the game blends simplicity and complexity in equal measure so you have an almost "skirmish" quality to it in the crew management coupled with a very simple combat system. A nice combination even if one does feel that the detail of some of the elements needs to be house ruled.

And of course it is streets ahead of WHH Trafalgar :)

Email ThisBlogThis!Share to TwitterShare to FacebookShare to Pinterest
Labels: Sails of Glory