The Train, Boss The Train (part 1)

A quick update on this frosty Bristol morning to show that work on the armoured train has commenced. 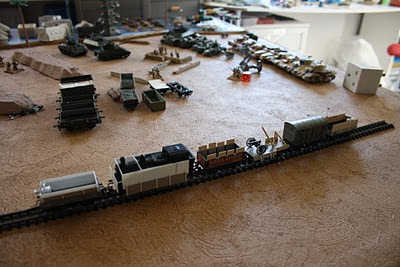 I'm currently working on four modified wagons - two "gun trucks" with Nordenfeldts and stowed carriages, one wagon with simple armoured panels and a flat bed truck carrying a tripod crane and an artillery piece. On, and of course the locomotive (which is a Triang Jinty). There will also be several standard open and closed wagons and (when it arrives) a horse box! 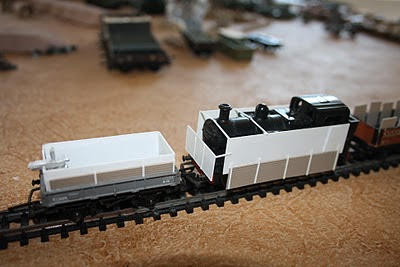 The rolling stock is perhaps a little too modern looking for the 1880s, but hopefully the application of stores, figures and "clutter" later in the build process will help to hide their early 20th century appearance!. Of course i still have an excuse to keep an eye out for additional stuff that looks more in keeping with the period :)
Posted by David Manley at 12:25