The Train, Boss The Train (part 2)

Sunday afternoon proved to be quite productive. Not only did I (almost) finish the latest addition to my 1/144 Wings of War “Biggles” collection, I also managed to progress the Sudan armoured train to a high state of completion. My previous entry was made at the point where the construction work had been completed and the wagons and engine were drying. That evening I gave the lot an overcoat of Revell “Tar Black” (an excellent shade, just “not-black” enough to look quite distinctive), and this afternoon I finished off with a dry brushing of “Steel” to emphasise the impromptu nature of the added armour, followed by a  very light brushing with “Beige” to give a slight weatherworn appearance. Finally, a few Peter Pig sailor figures were added to give a sense of scale, and this motley crew will be augmented by additional naval and army personnel (plus a few fellahs I shouldn’t wonder) over the coming weeks. 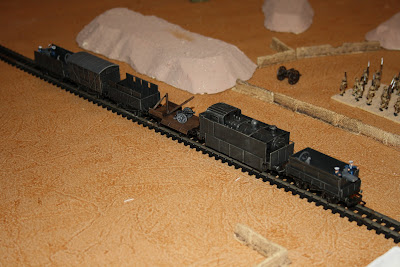 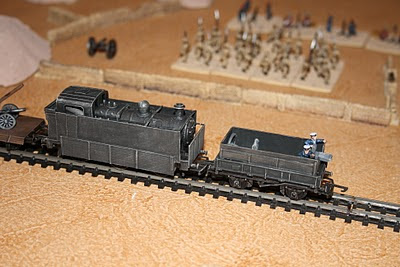 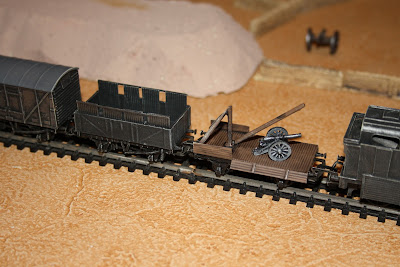 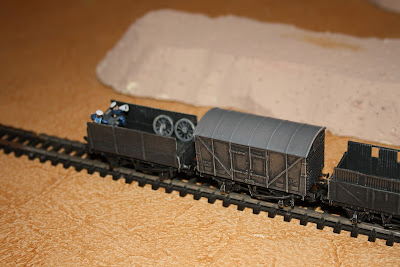 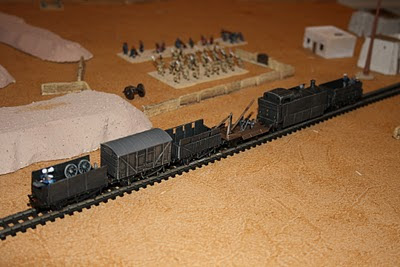 I will be adding to the collection with (ideally) some water wagons, a few more boxcars and another gun truck. And I'm still looking for a decent tender engine that is more in keeping with my original thoughts on what would be an appropriate locomotive, as well as an obviousy "European" loco that I can use with my Spanish Civil War collection. any suggestions on sources of cheap TT gauge rolling stock in any state of disrepair would be most gratefully received!
I ought to add a couple of notes regarding inspirations. The following is an excellent resource for 15mm Sudan gamers, and the first three shots show where I pinched the ideas for the gun trucks: warin15mm.com/The-Sudan.html . There was an excellent series on making a Boer War era armoured train in 20mm in Airfix magazine back in the 1970s or 80s (copies up in my loft somewhere) which gave me some ideas - and which will have me building a searchlight car in the not-too-distant future for when I get into that conflict. finally, there is a nice drawing of a train in the Sudan in Howard Whitehouse's "Battle in Africa" which gave me the idea for the crane and gun carriage.
Posted by David Manley at 18:16