Oh no, its the AK47 Rozzers

Whilst working on a project that needed some background info on Marmon Herrington armoured cars I came across a piece describing how a few were adapted for use by the Rhodesian and South African police after WW2. Of course this got me thinking about AK47 games and 3D modelling proved to be the answer again as I had some of Mike Bergman's excellent 1/100 models on file.

After a bit of playing around in MS 3D Builder I had this: 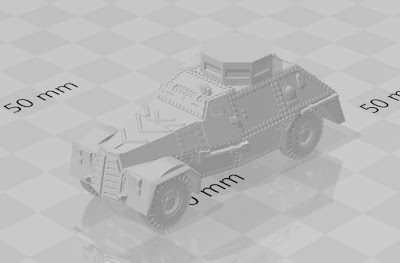 And a couple of hours later the printer had thrown out these: 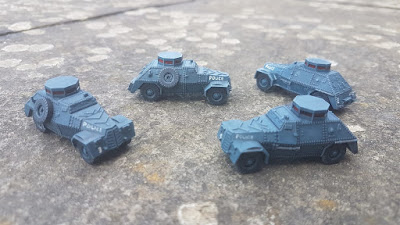 The only thing I was unsure about was whether the top of the cupola was closed or open. I went for closed but on reflection that probably wasn't correct. But if so its not a big job to amend the 3D model and print some more.

Something a bit different for our next AK47 games at Berkeley Vale, assuming we ever get to play again!