This year sees the 2,500th anniversary of the battle of Salamis, where the Greek navies fought off the Persians (actually even more Greeks, Egypt and and Phoenicians) and saved civilisation. There's an interesting project at http://salamisday.weebly.com/ calling on naval wargamers to refight the battle in September, and I have my new ancient fleet action rules ("He Hemetera Thalassa / Mare Nostrum") coming out soon, so I decided to have a practice bash at Salamis in advance of the big day later this year.

The table I had set up was 6' by 4' but as expected the battle ended up clustered in the "north west" corner (that was OK, I had the rest of the table on which to place stacks of markers and other stuff). 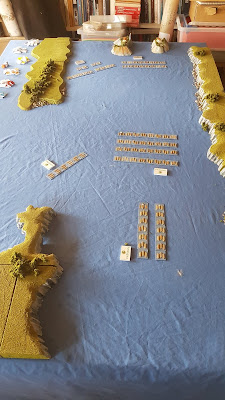 The battlefield as seen from the "east". The three Persian fleets advancing on the Greeks at the top end of the table 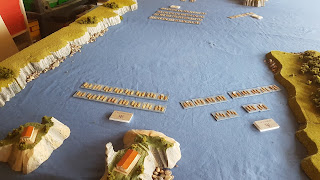 The view from Salamis. Themistocles' Greek squadrons on the left flank, Eurybiades' Spartand and others on the right. 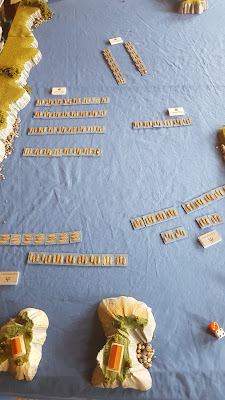 As the Persians close, Themistocles adjusts his line, taking the first Greek squadron closer to the mainland shore. A risky move as the shore is lined with Persian archers who can support their ships at sea. There is also a chance that, if control rolls are failed, Themistocles will find himself being hit in the flank before he can redeploy into line. 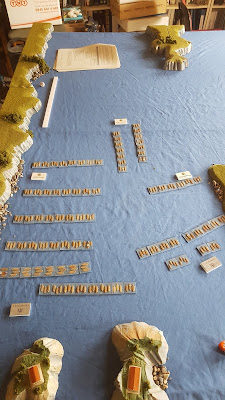 The Persians continue to close, and the leading Phoenician squadron is very close..... 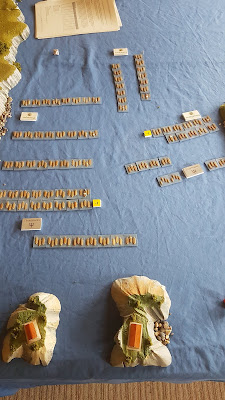 But the elite Greek seaman come about, form line and charge the incoming Persians. Archery from the leading Persian squadron and their supporting archers on shore cause some casualties on the way in, which will give the Greeks a penalty in the upcoming melee (the yellow "-1" marker shows the die roll modifier that will apply in melee) 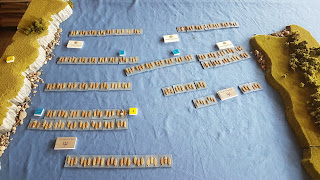 Themistocles hits the Persians, sinking ships (one stand loss) and throwing the squadron into confusion (blue "Out of Formation" marker) 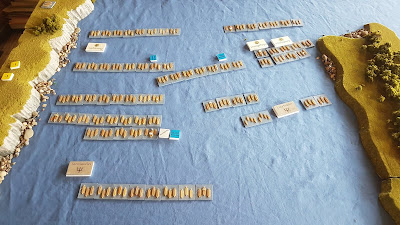 The Greeks sweep through the Persian line, the second athenian squadron in place to support. On the right the Spartans hit Ariabignes' Ionian squadron. 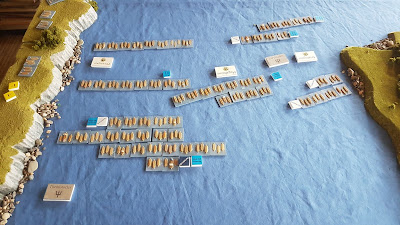 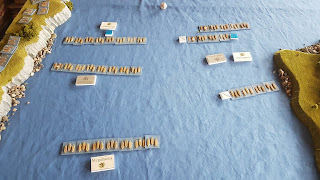 Themistocles has shattered the third Phoenician squadronvand is set to for a grand finale against Prexaspes, but the Cyprus squadron is poised to make an attack on the Athenian rear. The Spartans and Carians face off, a battle that the Carians would lose. Artemesia's ships are the sole survivors (but make a quiet escape as the morale of the rest of the squadron evaporates). 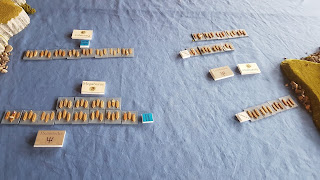 Megabazus hits the Athenians, but his attack is badly timed; Themistocles rallies his ships and strikes a heavy blow against the attackers who, despite their advantage, take heavy losses and quit the battle. In the melee Megabazus takes an Athenian spear to the chest and dies on the deck of his flagship. 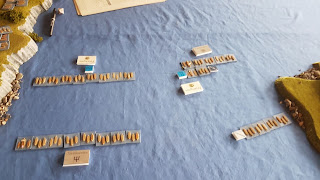 At this point the Greeks have achieved their victory conditions. Despite losing four of their own squadrons (including one of the elite Athenian squadrons), the Athenian and Spartan squadrons commanded by Themistocles and Eurybiadas have destroyed five Persian squadrons. Prexaspes signals the retreat and begins to think about how he is going to explain this to Xerses. He needs to think quickly, Artemesia is already on her way to the great king's tent to tell him her view of the battle.....

It is likely that your chronicler's memory on a few points is confused, and my plan to take photos at each stage of the battle went awry very close to the start, but the above paints the picture. The battle took about 2 hours to complete and I was quite pleased both with the game and with the models - this was my first outing for the 3D printed 1/2400 stands that I've been making over the last few weeks.

Lookig forward to some more trireme action soon, and of course at least another Slamis refight on or around September 25th.....