My INWarD game 2018 game took place at the local Berkeley Vale club, where six ab initio naval gamers encountered the chilly wastes of the Baltic in Spring 1943. This was a 1/600 coastal saction, with a German scratch force of S Boats, R Boats and an armed auxiliary attempting to sink a crippled Soviet submarine escorted by sub chasers and a couple of G5 MTBs. Scattered ice floes complicated the picture. The game was a fast and furious mix of gunnery, high speed manoeuvring, tenacious torpedo attacks and much hilarity. In the end the Soviets drove off the attackers, sinking one S Boat, crippling an R Boat and the auxiliary. No Soviet craft were lost although a number sustained heavy damage. The Germans launched torpedoes at long range but narrowly missed the submarine, which if successful would have been an automatic victory for them. Good fun was had by all, and we may try an Adriatic action soon. Alas I was concentrating on the game so much I failed to get many pictures! 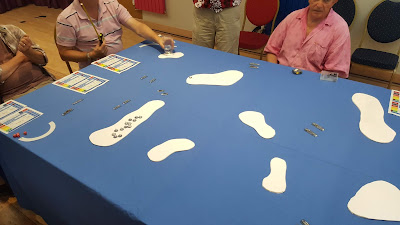 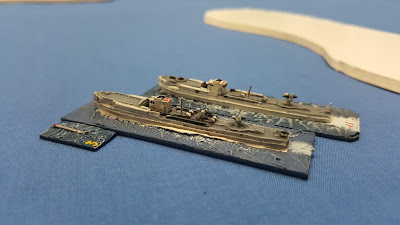 I followed up the game with a solo refight of River plate. A quiet affair that started as the historical battle with Exeter heavily damaged early on, but a couple of solid hits from Ajax slowed Graf Spee to the point where the British light cruisers could close for a torpedo attack. Achilles was heavily damaged in the approach, but Ajax scored a hit that crippled Graf Spee and left her a sitting duck for a second torpedo attack that sent her to the bottom. No photos of this one as it was late and my phone battery was flat. I really need to get myself a PO(Phot) for these occasions!
Posted by David Manley at 09:37