There's Too Many Of Them!

having discovered how close the old Micro Machines Star Wars models were in size to the official FFG Star Wars models I decided to base them up, and also work on some large ship bases as well. In the meantime two F Toys Lambda shuttles arrived as well, so I now have two rather large fleets of ships (and I have just heard that one of my friends in the Berkeley Vale club is also splurging on models).

All of the fighters are mounted on GW flight stands or similar, themselves glued to 40mm square card bases to match the FFG bases. Large ships (the transport and the Falcon) are on 80mm square bases, whilst the corvette is big and mean enough to cope without (plus the scenario rules I've downloaded effectively treat the ship as "terrain" with the fighters moving around it).

The Falcon and transport bases made use of some "Magnetix" toy pieces - the ships have large ball bearings glued through the lower hulls whilst the bases are the magnetix stalks glued to the cardboard sheet. In the case of the Falcon this gives it a gimballed mount so the ship can be displayed at a variety of angles (an unintended consequence, but most pleasing).

Anyway, here;s the fleet assembled. Now I just need t make stat and manoeuvre cards for them all (plus work up stats for some of the non-standard ships!) 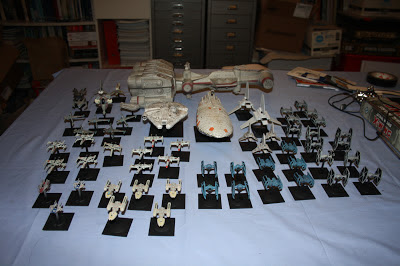 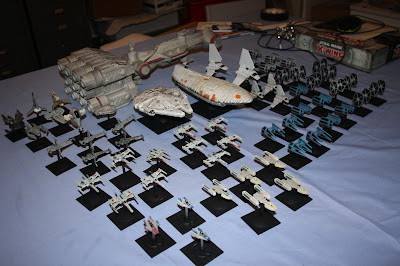