Like so many things the following is (in part) Steve Blease's fault. You see, he shared a picture on Facebook of a Libyan "technical" where some brave souls had stuck the turret from a BMP on a 4x4 (along with a park bench, or so it seemed - and I was also intrigued by the choice of football strip a modern day Arab revolutionary would wear, as well as the use of a machine gun as a pogo stick!) 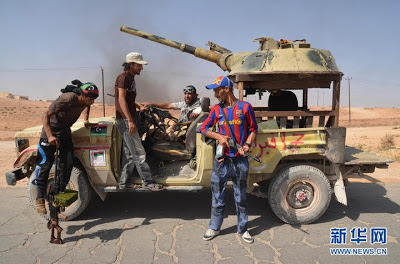 anyway, Steve's throwaway comment was "one for the scratch builders" so I immediately had a go. I didn't have a BMP turret to hand but the following was knocked up in pretty short order... 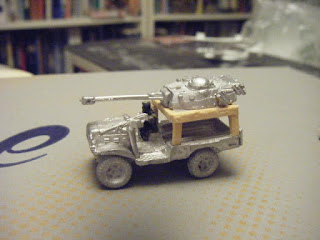 Still some work to do, but a passable starting point for my AK-47 armies. But that got me thinking. We have recently bought a Toyota Hilux Twincab as a "tractor" for the girls' horse trailer and I was joking that we could put a replica HMG in the flat bed, dress up in random footie gear with sunglasses and arab headgear and go to wargames shows and re-enactment events as the Libyan Resistance Re-enactment Society. of course my brilliant idea was poo-poo'd, but I was still left thinking what out truck would look like as a "technical". So I whipped out a spare Peter Pig model, fashioned the extended cab out of Miliput, added the running boards and stuck a 107mm RCL in the back. And here's the result: 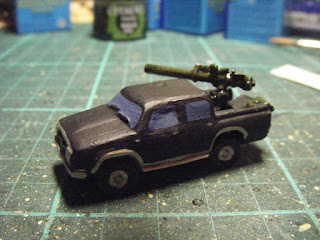 Again, not quite finished yet, and Liz wants me to add a horse trailer (presumably carrying ammo - and now that I recall there was an old matchbox horse trailer model that might fit the bill), but good enough and hopefully making an appearance at Berkeley vale soon.

btw, if anyone knows where I can get a cheap replica or decommissioned HMG.... :)
Posted by David Manley at 19:16