I've had a day to go over the rulebook for Warlord's new naval game "Cruel Seas"(in between sorting out various equestrian issues) and I thought I;d share my initial observations here before posting a fuller review later in the week. My first impressions are good - in general its an excellent set of introductory rules that is an ideal route in to naval wargaming, which is something I personally think is a great thing. It is wargaming very much in the "Boys Own" / "Commando Picture Library" vein, so its fun and fast but with some aspects that would have those more read in to the subject thinking were a bit "odd". And the potential for some truly odd counter-torpedo tactics (but I'll keep schtumm on that to see if anyone else spots it :) ) 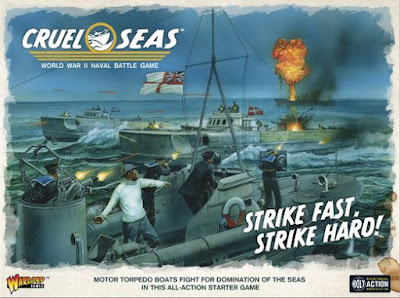 That said I have several pages of notes on various aspects which struck me as odd, unclear, quirky or just inaccurate. As a few tasters, the intro mentions 1/300 as being a good scale to use because the boats look wrong without crew - none of them come with anything recognisable as crew figures, and there has already been a lively debate over parking your S100 close in front of an MTB to force a collisions as being a valid game tactic in disposing of the smaller craft.

I think the choice of craft is odd (sizewise I still think 1/300 is to big and it would look better in 1/600 but then again its Warlord, has Bolt Action for inspiration and I've always thought that BA looks better in 15mm than 28 so the precedent is there :D ) - but in the choice of craft for the starter set Warlord have gone for four types that didn't encounter each other that frequently (MGBs and S Boats sparred frequently - MTBs had better things to do with their time for the most part). And in the data tables the lack of RN MGBs and Russian gunboats (but 4 varieties of riverine craft) are the most outstanding aspects , but there are others.

But, bottom line for me is that, as with Warhammer Trafalgar (with which it shares some hazy characteristics) if its popular and gets new blood into the genre then its a good thing in my book :)