The second of three supplements for Steamer Wars has just gone live on Wargame Vault. "War on the Great Rivers" covers  naval engagements on the Dvina, Volga and Kama river and the lakes of Russia during the Civil War. The supplement includes a host of new rules covering mines and torpedoes, troops on shore, land based features and targets and the riverine environment.  Data tables are included for many new ship and vessel types from the navies and irregular forces of the Bolsheviks, the White Russians and the Royal Navy. 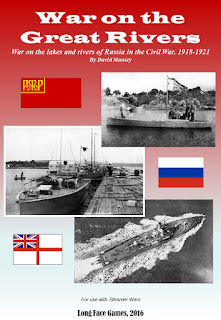 The third and probably final supplement covering additional African lake scenarios will be some time coming now, so likely to appear in early 2017.
Posted by David Manley at 09:27