Just recently I have been sorting out some of my outstanding ACW models. I've discovered a load of my 1/1200 collection wasn't based and they are now awaiting a spare few hours to have that done, but I also picked up some more 1/600 models from Bay Area Yards and Peter Pig, which I have just finished painting up. 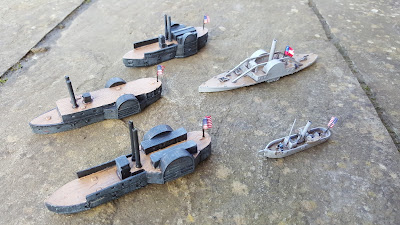 First up are the CSS Selma from BAY and Peter Pig's remastered Frolic. The former is one f my favourite gunboats and this recent model will be replacing my PP model of this ship. The BAY model comes with hogging bars which need a little bit of cleaning up to get them to fit right but which are essential to capture the character of this ship. The new Frolic is a lovely model that has many uses over and above its intended subject. A nice touch is the inclusion of small crew figures around the deck guns and on the bridge. 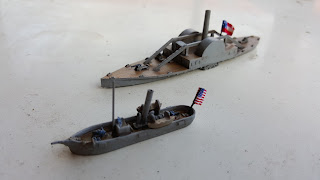 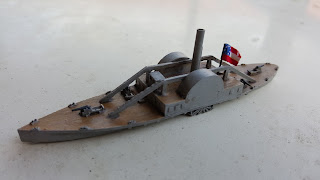 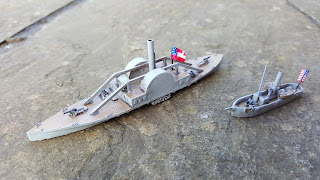 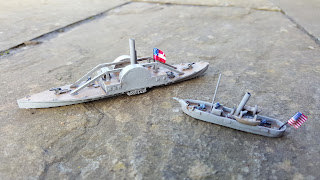 The other three models I've completed are the Union river gunboats Lexington, Conestoga and Tyler. These are decent, workmanlike models that nicely capture that rather brute force / Heath Robinson look of the originals. 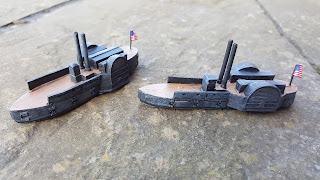 I've also tracked down some Peter Pig wrecks and a Peter Pig model of Fort Sumpter which has been languishing on my workbench for a few months. With luck and a few days painting they'll also be sorted and my 1/600 ACW collection will again be "complete" (at least until the next new models arrive)
Posted by David Manley at 16:06