I spent last weekend in deepest darkest North Devon taking part in a campaign based on the 1855 Anglo-French operations against in the Baltic. The game was put on by the NWS chairman, Stuart Barnes Watson using his extensive collection of 1/2400 models from Hallmark and Tumbling Dice. Stuart was using my "Iron and Fire" ironclad rules and so he asked if I'd be happy to umpire. I&F is written from an 1860-80 ironclad perspective so I devised a set of period specific rules to cater for the slightly earlier time period, and also to cover the campaign specific elements. 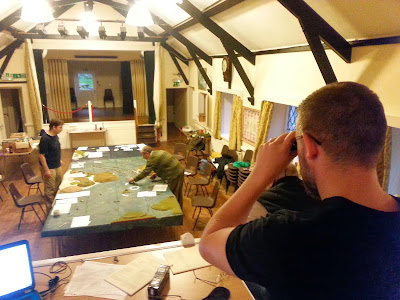 Lance surveys the battle from the Umpire's position

Day 1 saw the British and French repeating their 1854 attack on Bomarsund. The scenario that Stuart had devised had the Russian rebuilding the defences that had been destroyed in 1854, whilst the allies were seeking to occupy Bomarsund to establish a forward operating base for the blockade of the . The main differences between this battle and the 1854 campaign were the completely steam powered nature of the allied fleet and the Russian use of ships to defend the islands as well as shore batteries. Alas for the Russians the allies attack was very competently handled; light defences on the outer islands were rolled up by the British Inshore Squadron, the main defences and anchored ships engaged and defeated by mortars carried in the small fleet of bomb vessels. Realising the game was up the Russian steam ships escaped, leaving the islands to face their fate. 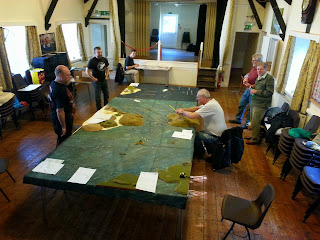 Stuart, the Russian commander, checks the range from one of his batteries. 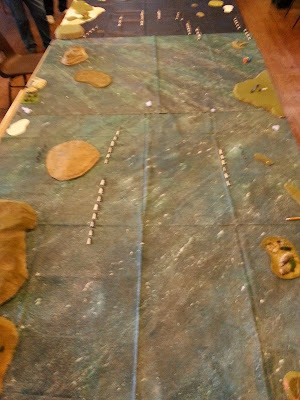 Battlelines drawn at the start of Day 2. Russians in the foreground, Allies to the top

Day 2 was to have been an Allied attack on Sveaborg, but this would simply have been a rerun of day 1, so we recast the day as a fleet encounter in congested waters on the approach to Kronstadt. To win the Russians had to sink or burn the majority of the Allied bomb vessels, which were the primary threat to the Russian fortress. unfortunately again, the Allied players proved too canny for the Russians who, despite many clever ideas and subterfuges (including offensive minelaying) were unable to crack the very well organised Allied squadrons. 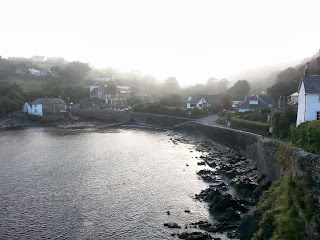 I wonder if the residents of the sleepy village of Lee knew what world-changing events were happening on their doorstsps?

All in all a very enjoyable weekend (even the Russians thought so, despite having their heads given to them on a plate twice). The rules and amendments worked well, even with 100+ ships engaged. Oh, and much beer was consumed at the rather excellent local pub in the between days 1 and 2!

The weekend did, however, reinforce my thoughts that the Russian War (aka the "Crimean" War) is a tricky one to wargame. Both fleets are large - but both have good reasons not to get heavily engaged. The Russians, with the vast majority of their ships reliant on sail power, are at a severe disadvantage in a fleet action (and as day 2 showed would most likely get chewed to pieces). Meanwhile, the Allies, lacking many specialist inshore craft, would be mad to attempt to force the very strong defences of places like Sveaborg and Kronstadt (behind which the Russians, if they have sense, will be sitting). So one has to develop rather contrived scenarios in order to force an action, run a counterfactual where the Russian fleet has a far higher proportion of steam ships or (as I may do in the future) run a campaign set in 1856 where the Allied have the benefit of the massive 1855-56 inshore warship building programme. It is, of course, an ideal setting for skirmish games based around British landing parties in - ideas of converting the Airfix Great Western into a gunboat for 15mm figures are forming in my mind :)