The Naval Wargames Weekend has come and gone for another year, and this year’s was the best yet. Thirteen games over two days, with nine games running on day 1, and seven on day 2.

On the Saturday I ran my Cod War game from Salute 2013. The rules were developed slightly from the original game and, as always, much fun and merriment ensued as frigates rammed coast guard vessels and vice versa. Highspot of the day was the “death ride of the Leander” in the final game as she rammed and sank a coast guard cutter, then immediately sideswiped a trawler and also sent her to the bottom. Instant RN loss! 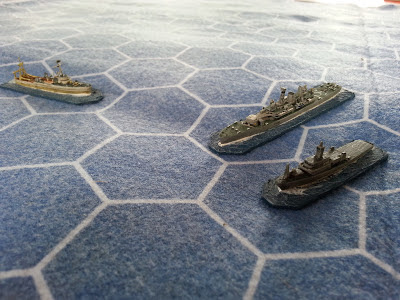 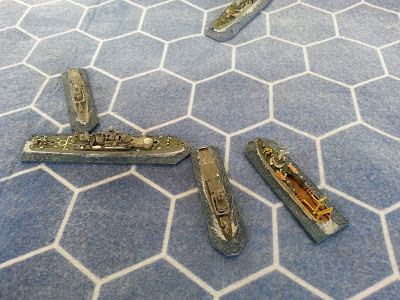 The Solent Wargames Association ran two games each day. On the Saturday Mark Backhouse ran his popular “Hail Agrippa” ancient naval participation game based on the battle of . An innovative set of rules based on the “Hail Caesar” land rules, emphasising the similarities between land and naval warfare of the period. 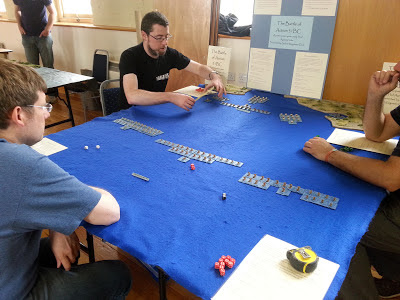 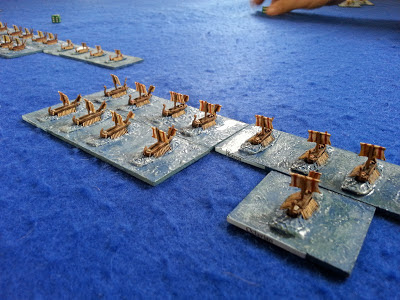 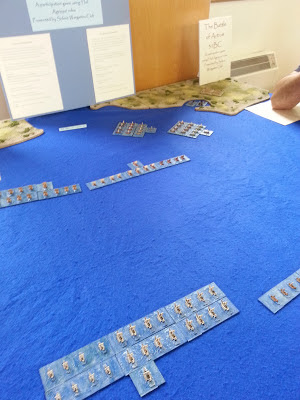 Solent’s other table ran a WW2 coastal game in 1/1200 using Action Stations rules, with lovely models and some exquisite coastline and harbour terrain pieces that prompted much discussion. They also ran a developmental game covering piracy off . 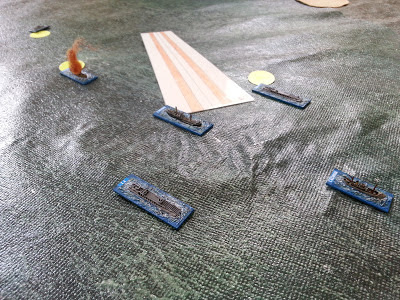 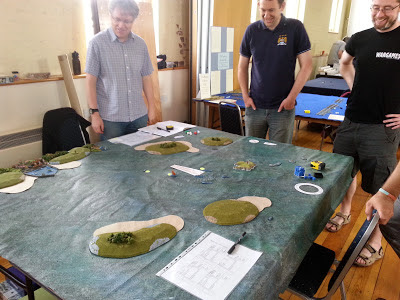 Mark Barker and the Inshore Squadron presented the 1797 battle of Camperdown. The battle was split into two phases, with the Southern Phase played out on day 1. As always, Mark’s models were awesome. 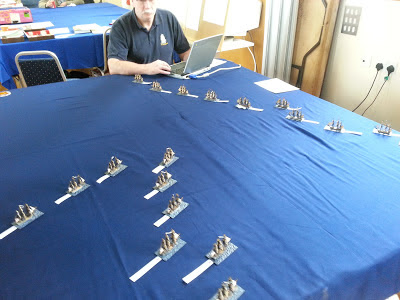 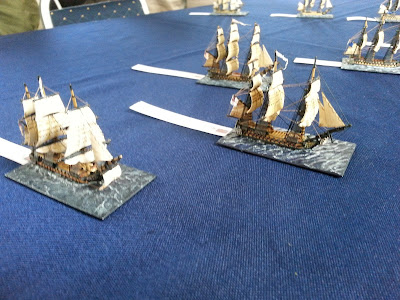 Wayne Pocock ran the of the in 1/3000 using War Times Journal minis and Naval Thunder rules. Naval Thunder has become something of a favourite with ’s team within the NWS.

Jeff Crane ran the second NWS game, this time a fantasy action with another battle from his continuing  “Keshian Civil War” campaign (which must have been running for over 20 years
now). 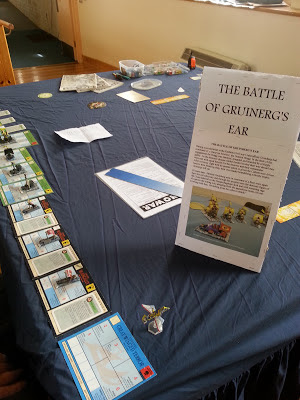 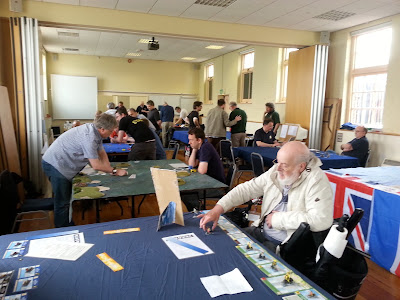 Rob Kirk and his team brought another WW2 coastal game, this time in 1/600 and again using Action Stations. The setting was the , with allied convoys beset by waves of Stukas and axis torpedo boats.

Another Mediterranean setting covered ’s 1/6000 modern naval game set off the coast of using a variant of Shipwreck. This was an intriguing game played at the task force level. 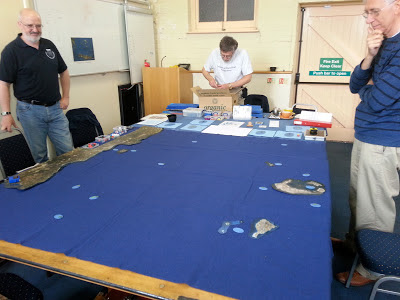 Last but not least,  Mongoose Publishing brought along their revised Victory at Sea WW2 naval rules and samples from their new 1/1800 resin ship range. MGP played through several demo and parti games based on the of the River Plate, and the new rules seemed to go gown well. 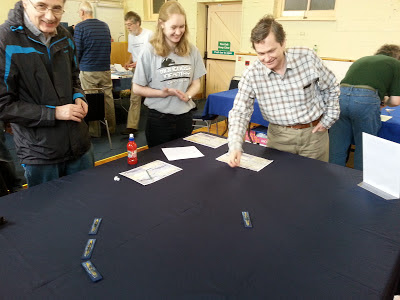 Although not run as a trade show Mongoose brought along their trade stand and they were joined on the trading front by Stuart Barnes Watson’s “” 1/1200 ship dealership, both of which prised some cold hard cash from the hands of the captive naval wargamers present J

Saturday evening’s barbeque was cancelled due to the inclement weather, but an intrepid cadre of NWS veterans slept over at the museum after holding the NWS AGM. So we were able to reset the hall bright and early for Sunday’s games. 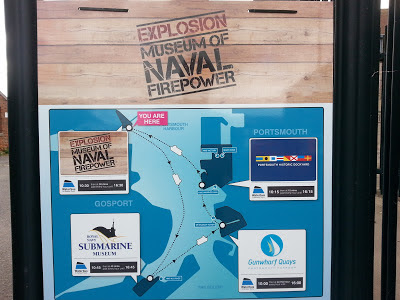 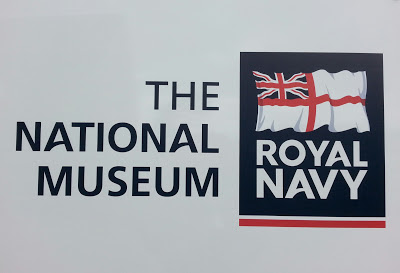 For me, Cod War gave way to the age of sail, with a demonstration through several participation games of Ares Games new “Sails of Glory” miniatures game. SOG is similar in concept to Wings of Glory, with simple yet effective rules using prepainted models. Many games were played, much discussion had, and the publication version awaited with great interest. As an aside the NWS will be running this game at Colours in September. 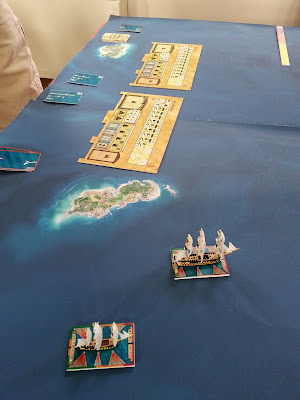 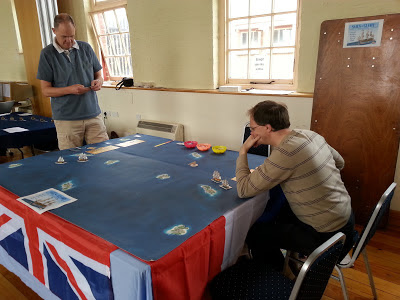 continued with the WW2 coastal and Somali pirate theme, but also brought a lovely 20mm Sudan-esque riverine game. This was a characterful game with some lovely scratch built riverboats, which always seemed to be having a hard time against the Dervish horde! 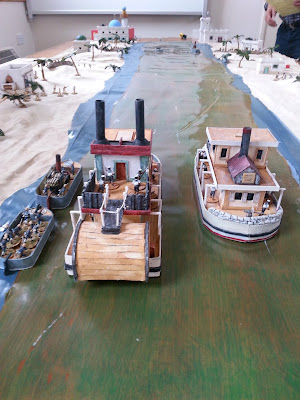 Mark Barker’s Inshore Squadron  moved on to the Northern Phase of Camperdown. As with the previous day’s action it seemed the British were getting the rough end of the stick for a change!

Rob Kirk’s team brought along their “Cockleshell Heroes” parti game, with canoes converted from Airfix 20mm Commando figures, scratch built “targets” and the dastardly Hun appearing from the shadows. I didn’t get a chance to play this one but I spoke to some that did and it was a lot of fun. 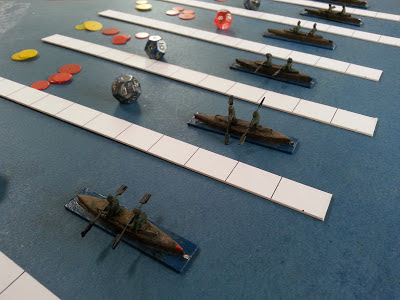 Ian Armstrong, one of Rob’s team, also brought along his “work in progress” – fleets of scratch built Tudor era warships, fully rigged, fully crewed, which had to be seen to be believed. This is a project that has been running since 2001. With luck the fleets will be completed ready for a game at the next show in 2014. 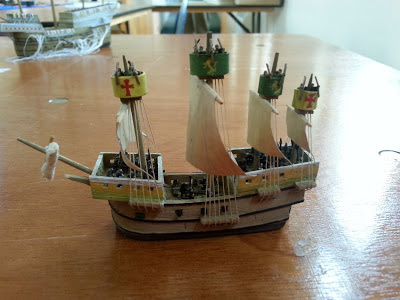 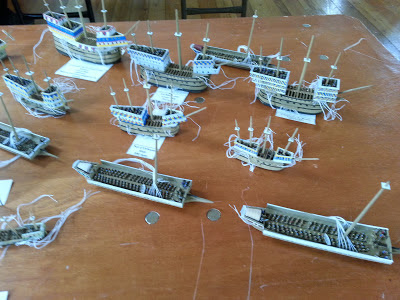 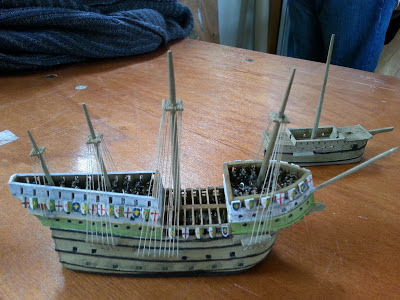 So, more games than ever, more games than we used to have at the old NWS show at Fort Brockhurst and, as far as I am aware the biggest naval themed wargames event in the UK, Europe and (maybe) the world. The aim of the show was to give naval wargamers an opportunity to get together, play games, try each other’s games and to swap ideas and techniques. In that I think it worked very well. The feedback from attendees has been great with everyone planning to come back in  2014. The tentative plan is to hold a slightly bigger event the same weekend, so pencil in the 21st and 22nd June for next year J
Posted by David Manley at 22:05