We are just under two weeks away from the Naval Wargames Weekend at the Museum of Naval Firepower in Gosport. I'm taking a few games along with me and I've been sprucing up the models for these over the last few days, and will be doing the same for the next week. Time permitting I'll be doing a scatch built 1/600 model of HMS EXETER, but for now I've been working on new ships for my "Privateer" variant of GW's "Man o War".

I've had "Privateer" available as a participation game for many years now. In essence it is "Man o War" played in a historical(ish) setting, using Peter Pig 1/450 scale models from their "Pieces of Eight" range. The basic rules are tweaked  abit to avoid some of the less realistic aspects of the original rules but only very slightly. The variant retains the fun and playability aspects and is very quick to explain and play out. The last trip out for the game under the NWS banner was at the Exeter wargames show in 2004. Not much has changed since then, the system still works fine. However, I've recently obtained  a large pile of Peter Pig ships and some others, partly with a view to covering the St georges Caye campaign of 1798 (which guaranteed the safety of Britain's colony in Belize). I've also got a coupel of the pirate xebecs from the old "Pirateology" range (now looking for some of the Junks in that range, rare as hen's teeth in the UK!) 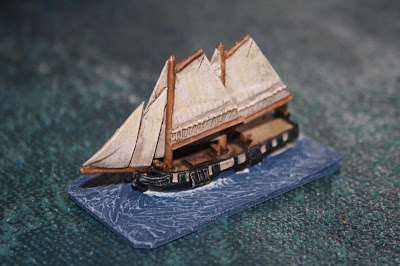 This first shot shows a PP schooner conversion. The original vessel is a topsail schooner with a squre rigged foremast. martin Goddard kindly sent me several spare aft masts from this kit and, with soem careful cutting and shaping, it is possible to fit one of these in place of the original foremast. I've mad eup 4 of these types of vessel which make ideal additions to the privateer fleet. 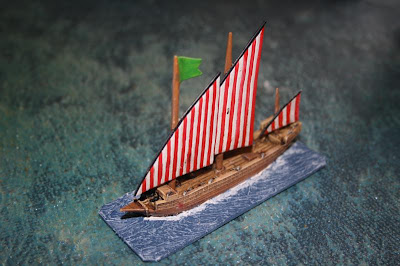 Pic #2 shows one of the Xebecs. I've got two of these. The hull needs cutting down, and some minor paintwork needs to be done to the sails and masts to make a better looking model, but apart from that these can be used almost straight from the box. In the game setting one of the two is configured as a spanish frigate, the second as a Barbary pirate.
The final new items are a couple of shore batteries, of which this is the better one :) 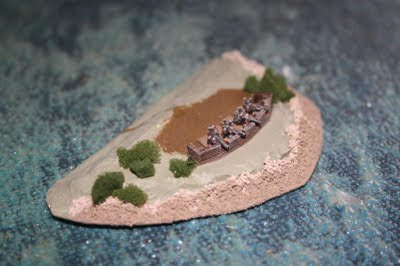 ﻿
The battery is made from Peter Pig guns and crews protected by a spare front face from a Thoroughbred 1/600 floating battery. all placed atop a hillock made form balsa coated with filler, with some foam bushes represnting nearby undergrowth. Honestly, it looks better in real life than in the photo! I was hoping to make a small fort but time is against me (alternatively if anyone can suggest an existing model I'd be most happy to hear from you!)

These show just a small postion of the new collection of models. The new additioons comprise two large warships, a dozen smaller warships, schooners and sloops, the forts, a couple of small junks and dhows, and a selection of boats and gunboats (converted from Irregular 1/300 boats - a bit out of scale, but they do seem to fit nicely with the PP models).

The project for the rest of the week (apart from the EXETER) is sorting out the 1/1200 Medieval collection, ready for the Battle of Dover scenario. More on this later :)
Posted by David Manley at 05:59