The NWS games weekend is at the Explosion museum at Gosport this weekend. I've just about got everything I need together for this now. I'm taking an interesting (I think) collection of games to play over the two days.

1) Medieval naval - Fleet action and small scale actions, probably running a scenario based on the 1217 battle of Sandwich. I'm using my home brew rules for this, using 1/1200 models from Outpost Wargames Services rounded out with GW "Mighty Empires" cogs, and some navwar transports.

2) Privateer - An age of sail variant of "Man o War", using Peter Pig 1/450 models (see my previous entry). I've run this at shows several times and it is a lot of fun.

3) Cod War - 1/1200 non-warfighting off Iceland in 1973. Again, I've run this a few times at shows in the past and it is a lot of fun. I might try one or two of the more "aggressive" scenarios between the Icelandic Coast Guard and some of the UK support ships that don't involve trawlers (but planty of ramming and "firing" at each other using fire hoses!) 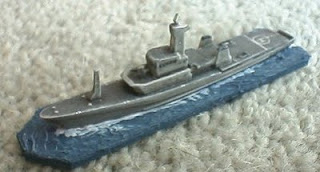 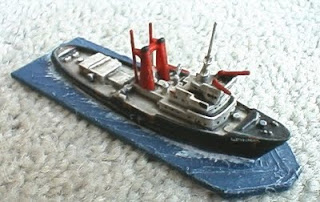 5) River Plate - Using the NWS freebie rules (which hopefully should be available sometime after the show), 1/600 models outside on the lawn, with the ground scale equalling the model scale. Intended to give players and viewers an impression of the rea distances involved in WW2 naval warfare. Thinks - maybe we should do this with moderns one day, 1/3000 Harpoons fired out to 60 metres or more!)

Hopefully the weekend will be a lot of fun!
Posted by David Manley at 06:44