This evening I’ve been playtesting my new solitaire convoy escort game. If you think of “B17 – Queen of the Skies” but driving a Royal Navy warship rather than a 4-engined bomber you are on the right lines. 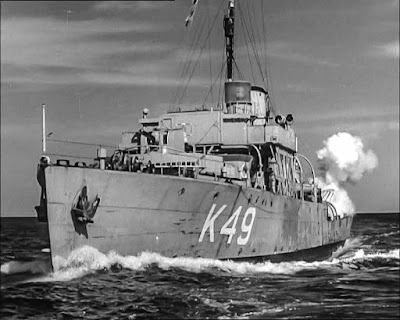 So, its 1942 and we are commanding HMS Crocus, a Flower class corvette. Our crew is well trained but it’s the first time out for many of them (we have no “special” crewmen who would give us bonuses in certain situations). We have a full load of depth charges, a 4” gun,  a radar that seems to be working well and pantry stacked with hot chocolate!

I’m using the random generation system to determine the exact scenario, and it turns out that it is Spring 1942. We are escorting a Fast convoy from Halifax, Nova Scotia to Liverpool. The escort strength is normal, the weather is generally good. Our station is at the rear of the convoy.

As we are running a Fast convoy we have 5 game turns to play. The first is the North American coastal turn (“zone A”), we have 3 open ocean turns (Zone B), and one turn in the Western Approaches as we close with our destination (Zone C).

Each turn we roll for a random event, then for any encounters. 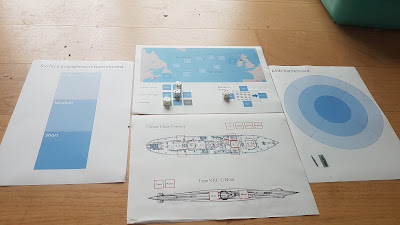 Random event – we roll a 2, which means there is a Support Group close by. This increases our effective escort strength to “Heavy” for this turn.

Encounter - The die roll is a 4, which means no encounter. Alas the presence of the SG is for naught.
The convoy plows on into the North Atlantic

Random event  - we roll a “no event”. An uneventful trip so far. But maybe too quiet.
Encounter – the die roll is a 3. Doenitz’s boats must be hunting elsewhere

Random event – A 10 is rolled, +2 for Zone B = 12. Maximum German effort. We’ve run into an accumulation of wolf packs, and will have to roll twice for encounters.

Encounter 1 – Contact, and we have a possible submerged U boat contact astern of the convoy. Our ship is dispatched to confirm and engage.

Phase 1 - The CO uses the “step aside” tactic to help avoid any incoming torpedo, and to possibly give the impression that we haven’t seen the contact. Contact level is “probable”, but then our radar picks up a periscope – contact raised to “Positive”. The bridge crews’ eyes are peeled for any incoming torpedo, but nothing is seen. 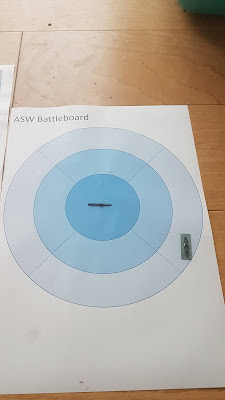 Phase 2 – we are now closing on the U boat. Contact is maintained, no change. Which means he’s probably not going deep. We may have caught him napping.

Phase 3 –As we don’t think he’s going deep we set depth charges for Shallow and we run over the contact. DCs away! The sea erupts as the spread detonates. We commence a turn to re-engage – and see a damaged u boat broach the surface! (natural roll of 10)! Gun crews close up and we go to a surface action.

We move to the Surface Engagement Battleboard, with the U Boat at Medium range. We make 3 critical hit rolls to determine the damage that the U boat has suffered in the DC attack. 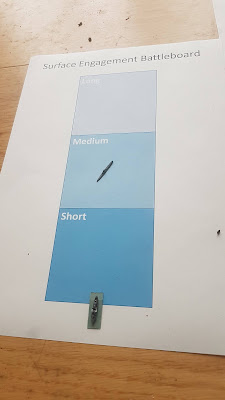 Rolls are 2, 8 and 10. 2 is “no effect”, 8 is “20mm damaged” but the 10 is “hull holed, boat sinks”. The U boat just makes it to the surface in time to allow some of the control room team to escape to the water, but before more than a handful get out the boat sinks, taking the rest of the crew with her. We decide to pick up survivors; 5 German sailors are pulled from the sea. The skipper is not one of them.

Having claimed our first kill we resume our position in the screen.

Encounter 2 -  No encounter (d10 roll is 2) – a tense night as we skirt through the wolf pack, but the screen is working too well to let the U boat commanders get a shot in. The turn ends

Random Event: Die roll is 3, +2 for Zone B = 5: engine trouble. We drop out of the screen and slow whilst the chief engineer makes repairs. On completion we speed up to try to regain our place at the back of the convoy.

Encounter:  Die roll = 9, so there is an encounter. The encounter type die roll is a 6, so its another ASDIC contact.

Phase 1 - The contact is ahead and seems to be heading in the direction of the convoy, “step aside” won’t really work in this position so we move to close the distance rapidly. Contact quality isn’t great, only a “possible”. Radar isn’t spotting anything.

TORPEDO! – the lookouts spot the wake of a torpedo closing rapidly from ahead. We are already on the right heading to comb the tracks, a slight alteration and the torpedo passes down the port side. That was close. There’s definitely a U Boat there, but the ASDIC contact still isn’t great.

Phase 2 – contact is still “possible”. Since we know there’s a boat somewhere that means ASDIC is having a hard time getting an accurate bearing. Whether he’s going deep is anyone’s guess

Phase 3 – Set DCs for Deep (I have a feeling he’s there but went deep when he launched his torpedo). The DCs detonate, but there’s no sign of any wreckage. We turn to re-engage.

Reattack, Phase 2 – as the reverberations from our DC attack subside the Jimmy reports “contact lost Sir”. We execute and repeat the lost contact procedure several times but come up with nothing. And as we are currently detached behind the convoy there’s no additional ships there to help us. He’s probably got away.

Somewhat dejectedly we leave the scene and rejoin the convoy a few hours later. At least the enemy was submerged and not able to catch up. I wonder why he was dived though? Probably spotted us before we made ASDIC contact. But I guess we’ll never know. (we draw a playing card and keep it hidden until the game end; this will tell us what happened, after the war when the archives are opened) 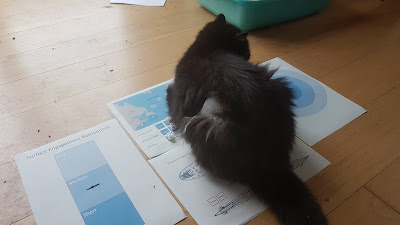 At this point, play was interrupted for a few minutes.....

We are almost home, but in many ways this can be the most dangerous part of the trip. But not this time.

Random event is 5, +4 for Zone C for a 9. Some of our escort detaches to assist another convoy. Not really what we want. But the encounter roll is a 5 “no encounter”, and so after a fairly eventful trip and one U boat and some of her very lucky crew “in the bag” we make it in to Liverpool for a quick turnaround before joining another escort force for a load of empties in ballast. No rest for the wicked!

But what happened to the U boat that we attacked in Turn 4? We turn over the card we drew in the encounter and it’s the 9 of Hearts. Its an odd number so he did go deep (we guessed right) and for a “no visible result” damage effect (the most “severe” that we caused) this equates to minor damage. The boat remained submerged, was not able to reach our convoy and itself returned home safely.

And so ends the log entries for HMS Crocus for this particular trip. Playing time (once I had removed the feline interloper who stopped play for a few minutes) was just over an hour. I picked up several areas where tweaks were needed, and a few additional elements that I worked up – rescuing survivors being the rime example.  It was a fun game and I think resulted I a pleasing narrative that had something of the feel of the Cruel Sea about it.

Right, I’m off to find come dark choccie and condensed milk – time for a large hot mug of kai!