As 2015 draws to a close the Berkeley Vale club has embarked upon another new project, Roman chariot racing. Steve brought along a decent set of card driven rules that he found on the internet and adapted them to his existing "Circus Maximus" table cloth. Add a selection of 28mm chariots and seven insane drivers and the stage was set for a fun evening. Three laps later and we had four crashes, Shaun killed as he was dragged behind his bolting team, Steve run over and killed by Andy as he swept to victory and three more crashes on the last lap. 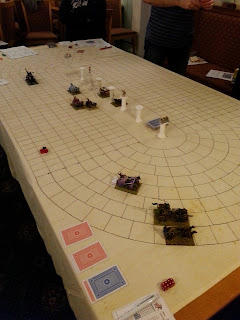 In the end only three chariots made it intact to the finish line. Andy won a well deserved victory, I came in second and New Dave was third.

Great fun and we will be starting a league in the new year. I'd love to put together a chariot team of my own using Steve Barber's models (I'd like to include the dragged driver and "pedestrian" figures) but they seem to be unavailable. Anyone who could help in tracking down a set please get in touch!
Posted by David Manley at 18:58